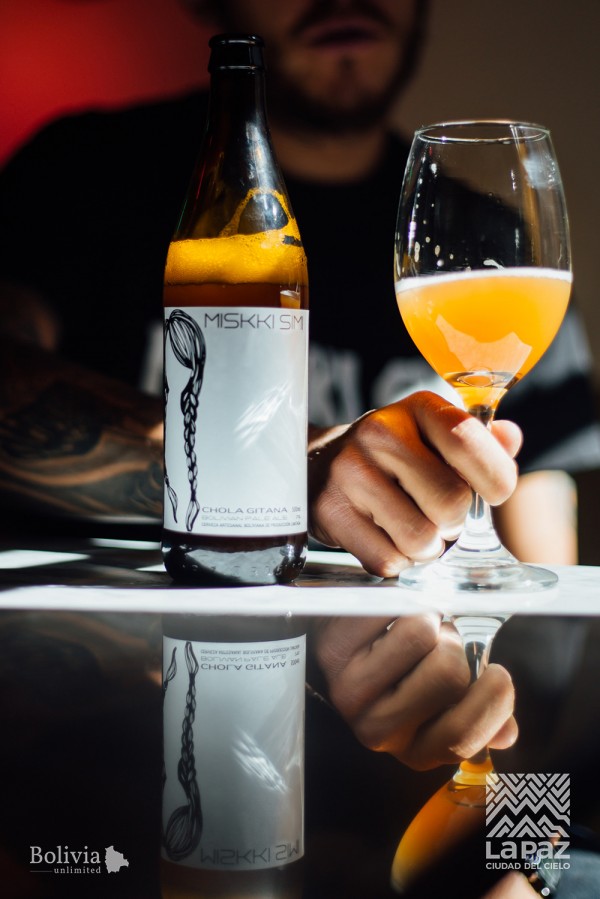 What does the future hold for craft brewing in Bolivia?

I'm drinking an Artesana Cobriza Red Ale in La Paz’s Cafe Vida near the Witches’ Market. It’s full-bodied but light, fruity but not overly fussy. It’s also 6 percent ABV and the third in my Cafe Vida trip – I'm already tipsy and about to soar above the altiplano and write the whole afternoon off. Ninneth Echeverria, a sunny café staff member, tells me, tongue-in-cheek, that ‘Bolivian people drink the most alcohol in the world’ – despite the high altitude making sobriety a difficult state to maintain.

The conversation shifts to drinking culture in Bolivia in general, and about the craft beer scene that's been popping up over Bolivia – there are 75 microbreweries in Bolivia and growing. The two biggest independents are Niebla and Prost, which are sold in many restaurants and even some supermarkets. Niebla specialises in IPAs, red ales and a somewhat Anglo-American focus in terms of style; Prost draws most of its inspiration from Germany with dunkels, Weissbiers and even a quinoa beer. There’s also a multitude of smaller breweries, some run by crafty entrepreneurs and others crammed into spare rooms by enthusiasts. There’s Vicos and Ted’s in Sucre, Cochabamba-based Stier and Bendita from Santa Cruz, to name just a few.

There’s a multitude of smaller Bolivian breweries, some run by crafty entrepreneurs and others crammed into spare rooms by enthusiasts.

Echeverria explains that the craft beer scene in Bolivia is incredibly tight-nit and friendly. She knows almost all her suppliers personally, begging for rare bottles from the smallest breweries and passing on recommendations of small batch beers that her considerable charm and negotiating skill have, for now, failed to snag. It’s a scene where everyone knows everyone, and they’re all united in a love of beer and conversation. I've finished my fourth beer, a dainty San Miguel IPA – San Miguel being a craft marque made in La Paz – and my journalism skills have completely deserted me. The rest of the interview is mostly swapping Bolivian and English drinking chants – with my limited Spanish skills it certainly helps that alcohol is a true universal language.

Craft beer in Bolivia is clearly at somewhat of a crossroads. It has developed as a scene slightly later than in, say, Peru or Argentina, and the various players involved are gradually feeling their way in these uncharted waters towards developing an independent brewing industry that is sustainable, vibrant and, above all, uniquely Bolivian. I wanted to find out how Bolivian craft beer can become something more than simply craft beer that is brewed in Bolivia – how it can take on its own unique identity.

‘We get on really well with all the other small breweries, we see them as more friends than competitors,’ Cervero brewery’s Enrique Abastoflor tells me over one of his American Pale Ales at Vicio’s, a related restaurant in Zona Sur. It’s clear he sees the philosophy of companionship as crucial to the success of craft beer in Bolivia – a rising tide lifts all ships, after all. The pale ale we are drinking is both strong and refreshing, as all Bolivian crafts seem to be, and we get chatting how Cervero was founded.

‘It started when my brother and I both went to Germany on seperate foreign-exchange trips,’ Abastoflor says. ‘We both came back with this obsession with quality beer.’ From there it was all about market research, how to translate a dream into a career. While Abastoflor was scoping out the market, his brother, Mauricio, tinkered around like a chemist with malts, hops and flavourings, constantly experimenting with recipes. After the brothers made their first batch they knew they were on to something. Cervero was formally founded in 2017 and has been expanding ever since. 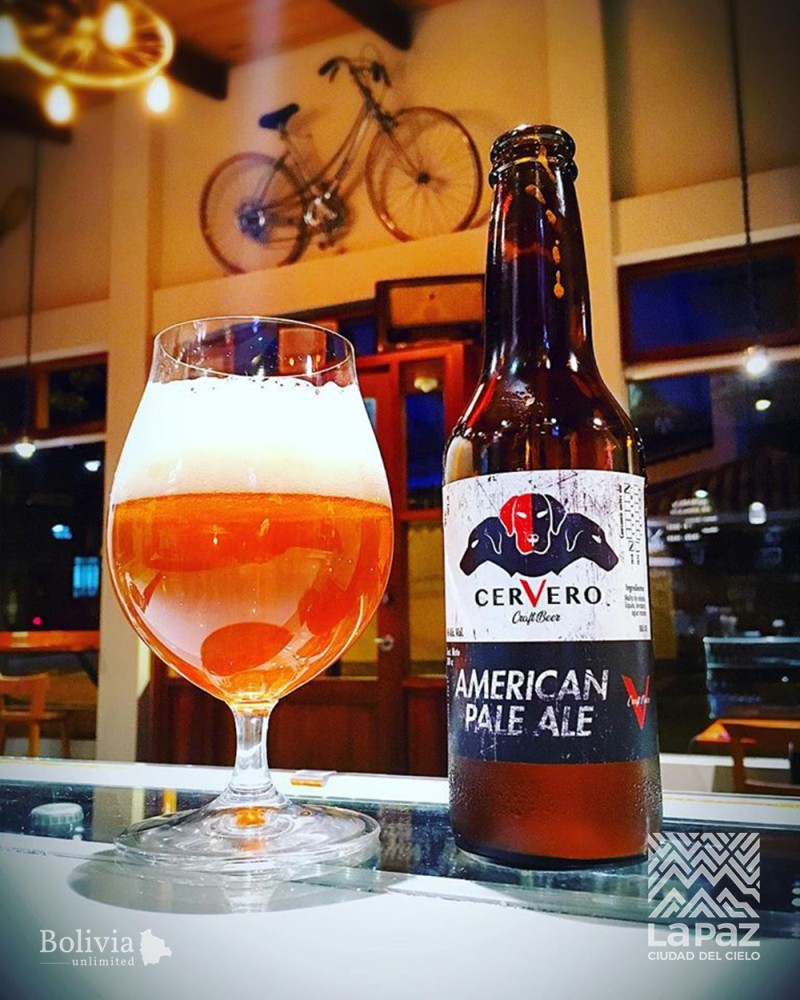 ‘We're not in the golden age just yet, we just want to be around when that time comes.’

Sukko Stach, the owner of Miskki Simi, is another young and ambitious entrepreneur looking to make his mark. We meet in a room below his apartment filled with technicolour bottles, three beer vats and assorted paraphernalia neatly organised in labelled boxes. This is where all of Miskki Simi’s beverages are made. If Mauricio Abastoflor is the energetic mad scientist of craft beer, then Stach is more of a sommelier – sophisticated, cool and with an official beer-tasting certification.

Stach has a much more sober appraisal of the Bolivian craft beer scene than the wide-eyed optimism of the Abastoflor brothers. Tapping into a barrel he has left fermenting in his back room, he starkly sets out the many roadblocks to surmount to make beer in Bolivia. First, apart from water, absolutely none of the traditional ingredients in beer (particularly hops) are grown in Bolivia, and import costs and tariffs eat into margins. Also, if beer made in Bolivia has got no Bolivian ingredients, how can an authentic and unique scene ever develop? Stach thinks he has the answers. ‘I don’t really like making beer with hops,’ he says as he open a deep orange bottle and passes me a glass. ‘This is a sour beer.’ I take a sip, it tastes halfway between a cocktail and a beer, at once both sharp and sweet, thick and light. Most Miskki Simi beers are now made with fruit as the base, such as the orange and cinnamon one I'm drinking now. Stach is someone who always wants to do things differently and experiment. He opens up bottle after bottle and keg after keg, and we drink fruity sour beers often modelled after the traditional roadside soft-drinks of Bolivia (a dried peach concoction modelled after mocochinchi being a particular favourite of mine). Making sour beers ensures that as many ingredients as possible have been grown in Bolivia – potentially the first step towards ensuring that the craft beer scene in Bolivia is both unique but also economically sustainable.

Is producing craft beer in Bolivia a job or a hobby? The Abastoflor brothers at Cervero and Sukko Stach at Misski Simi have equally strong and equally conflicting answers. For the Abastoflors, the first step is to reach more efficient economies of scale; they are planning on moving to a larger venue than their spare room in the near future. Next, there needs to be a unified effort by craft breweries to carve out a space in the Bolivian beer market and start competing with the major industrial beer manufacturers. Most of these, such as Paceña and Huari, are owned by CBN, a conglomeration with a staggering 90 percent market share in Bolivia. However, the brothers have faith and talk about the power of independent breweries working together as the way forward. There’s a WhatsApp group comprising 75 brewers, and there was a recent beer meetup in Cochabamba. There is even talk of an official trade body of small breweries so that the little guys can compete on the same level as the big players. To them, craft beer has the potential to become a large and sustainable industry provided those involved all work together.

Back at Miskki Simi, Sukko Stach is more subdued. ‘We'll never be able to compete with Paceña, so why try?’  he asks. Stach believes that one of the biggest problems with craft beer in Bolivia at the moment is the notion that there is this big, untapped market out there waiting to be exploited by small breweries. If Bolivians are happy with Paceña and Huari, as they seem to be, why would they pay more for something funkier tasting, more expensive and harder to find? Moreover, the bureaucracy of running a small brewery and the overhead associated with importing ingredients will never go away (though a few manufacturers have discussed buying some land in Bolivia to grow hops, the venture might not be profitable and could render pointless the whole idea that each craft brewery should be unique). Stach sees the massive shadow of Paceña as an essentially immovable object: If you can't break through it, you need to work around it. Therefore the solution is not to beat Paceña at its own game, but play another game entirely – a game that is winnable. He taps another keg and out flows a cloudy white liquid. He has a look of pride on his face – a workmen finally seeing the fruits of his labour. ‘This is the first craft cider in Bolivia,’ he says proudly.

Cider, Stach explains to me, is a very common celebratory drink in Bolivia, but most Bolivians buy an overpriced but quite average Argentinian import for Christmas, New Year’s and family celebrations. I have a taste of Stach’s brew. It’s sweet with a crisp nose and a dry smooth flavour.

How to make Bolivian beer uniquely Bolivian is a question that occupies the minds of many independent breweries in Bolivia. Back at Cervero, Mauricio Abastoflor also has plans for drinks that tap into Bolivian culture and the spirit of the Andes. He gets his notebook out and excitedly lists off his ideas for future recipes. In particular, he is keen on using modern techniques and equipment to make a genuine chicha, the traditional corn-based drink of the Andes, in a way that appeals to craft connoisseurs yet does not sacrifice any authentic stylings. There’s a sense that a new age of experimentation, in which ‘Bolivian beer’ means more than just beer that is made in Bolivia, is beginning. Locally quinoa and honey are being incorporated into recipes (as in Café Épico’s Epic Bee brew and Ted’s Ñusta), and there are also myriad other local grains left to experiment with.

So what does the future hold for craft beer in Bolivia? On the one hand, there’s a small, dedicated and endlessly friendly community of producers and sellers who care deeply about crafting a sustainable scene in Bolivia, and some of the beers are so good you think they just might do it. My personal favourite was the Thaquexa Altbier Roja, a perfectly balanced red ale brewed in Cochabamba that I drank over lunch at the boutique restaurant Popular. On the other hand, the gold rush of Bolivian beer is also something of a wild west – the import costs, the red tape and the leering shadow of Paceña and Huari suggest a long and tough journey to carve out the right gap in the market for small breweries to thrive. Ultimately, the jury is still out on whether this is really is a business or a hobby.

Back at Vicio’s, while I sit with the Abastoflor brothers in the afternoon sunshine, sipping on another crisp American pale ale, it's hard to be anything other than positive. The alcohol is getting to my head once more, and I try out some of the drinking chants Ninneth Echeverria taught me at Café Vida. Life is good. ‘We're not in the golden age just yet,’ says Mauricio Abastoflor, ‘we just want to be around when that time comes.’ 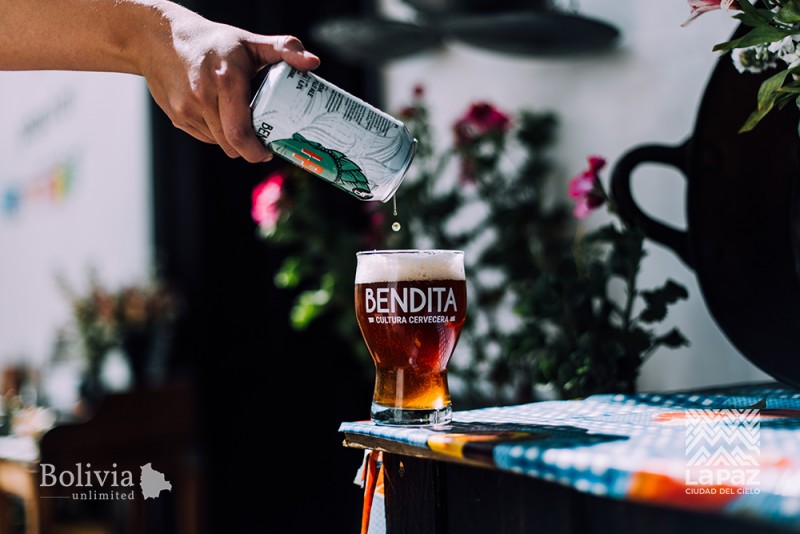