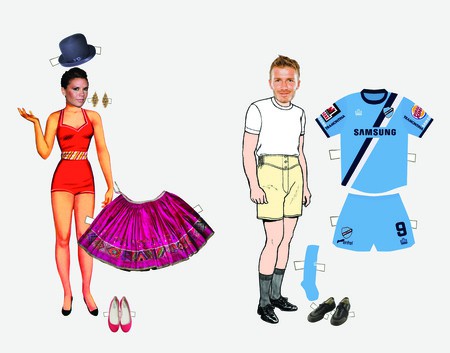 It was rumoured in May that David Beckham might emerge from his footballing retirement for Bolívar’s Copa Libertadores semi-final. With the club’s reigning oligarch Marcelo Claure later dismissing this idea as just ‘an illusion’, the club was left with a lingering sense of déjà-vu: in 1994, Bolívar offered Maradona US$1 million for a six-match contract — a deal that was widely criticised before eventually falling through. While the temporary signing of ‘Golden Balls’ remains an improbable dream, Alex Walker nonetheless takes a step into the subjunctive and imagines what might happen if the Beckham brand emigrated to Bolivia.

Having signed a one-month contract and twisted the squad registration rules, David is cleared to play. However, after sitting out the first leg with dodgy bunions, he collapses from altitude exhaustion just 17 minutes into the return match at Estadio Hernando Siles and spends much of the half on his hands and knees, routinely ferried across the pitch by the medical buggy to take Bolívar’s set pieces. After halftime, however, David emerges from the dugout with a suspiciously bleeding eyebrow due to an incident later dubbed ‘hair-straightener-gate’.

It seems, though, that the anger rubbed off on ‘Golden Balls’ and, in a moment reminiscent of his notorious dismissal for kicking-out at Diego Simeone in the ’98 World Cup, the red mist descends once more: Beckham charges manically around the pitch searching for the nearest Argentinian to kick — someone who, unfortunately and ironically, turns out to be the referee. As suspicions are raised about David’s sudden burst of energy, however, FIFA discover that his recovery was not all above board –an emergency supply of coca leaves down his right shin pad providing the vital dose– and he incurs a post-match lifetime ban for supplement abuse.

Soon after, the family fall on hard times with their only source of income being decennial Spice Girls reunions at occasional jubilee celebrations back in Britain. After an auto-tune failure during a rare Victoria solo causes the deaths of no fewer than four much-loved family pets, the Beckhams –disgraced and excommunicated from mainstream culture– find themselves in dire straits. Unable to return to a crumbling Beckingham Palace, David lands a weekend job as a personal lustrabota to Bolívar’s goalkeeping legend Quiñones — a role that finally earns him a knighthood under the banner of ‘charitable work’. Victoria, meanwhile sets up a small stall in El Alto market that specialises in knock-off or stolen items from Victoria Beckham ©; a brand name whose rights she surrendered after a long, drawn-out and unsuccessful legal battle with Jean-Paul Gautier.