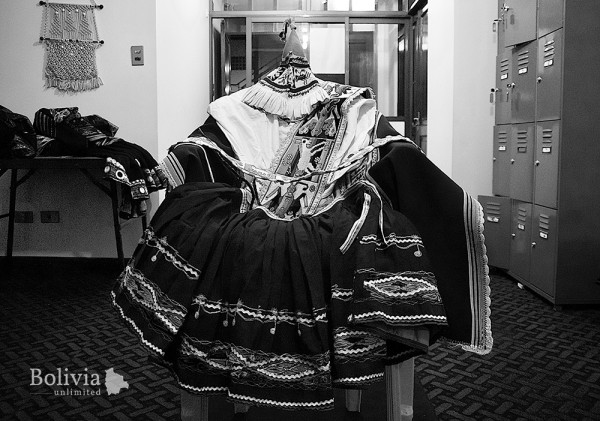 Redefining the social boundaries of an artform

To think of ballet is to think of a well-constructed image of a tall, slender, fair-toned dancer in front of an elegant, rich, fair-toned audience. The art of pirouettes and tutus has always retained an elitist, if not racially discriminative, tone throughout history and around the world. Its origins in Europe have given it a sense of exclusivity that has not allowed much room for progress. But here in La Paz, once the curtains open and the applause dies a contrasting sight becomes visible – a short, dark-skinned Bolivian, standing out amongst the expected.

Ballet schools in Bolivia are changing ever so slowly. The transformation might be gradual and singular to a small number of groups, such as Ballet de Bolivia (BDB), but the initiative reflects an overarching change in the country towards a more inclusive interpretation of this particular dance style.

Jimmy Calla Montoya, Director of BDB, emphasises the importance of Bolivian identity not only as an essential part of his ballet, but also as the core of his institution. He has danced for the Ballet Folklórico Nacional de Bolivia and has had his own ballet school for six years now. Having travelled around the Bolivian countryside and learned first-hand about indigenous dances, Calla believes the ballet scene is slowly becoming more inclusive – although it hasn’t been easy. Originally, classical ballet in Bolivia was limited to people who had money and descended from Spaniards and criollos. As one of the first few non-white Bolivian dancers, Calla remembers being called one of the ‘dark ones’ at the start of his career.

‘Classical ballet is European and the physical prototype is of a European, not a native South American,’ he explains. ‘The most shocking in my case was that I was brown, and in 1997 this problem was a lot more prominent. The issue of discrimination also transpired in my transfer to traditional ballet. When I applied [to Ballet Folklórico Nacional] they objected to my features. At the time, dancers wanting to represent Bolivia in European shows still had to have light skin and light eyes.’

Ballet in Bolivia is becoming ever more inclusive, if only in small measures.

But as Calla says, ballet in Bolivia is becoming ever more inclusive, if only in small measures. On a national level, Ballet Folklórico Nacional now accepts all dancers, which is a sign of progress. At BDB, Calla recruits artists who have a body for ballet, independently of their skin tone, and who can learn the skills that he is looking for.

One of Calla’s objectives in founding BDB was to give the opportunity to all Bolivians, regardless of their skin colour and stature, to dance and to learn about ballet. The other important motivation was to reclaim a national heritage that he felt was being lost. According to Calla, when transposed to the urban, more international context of Bolivian cities, traditional dances have been stylised to a point that they have lost their essence. ‘A lot of the traditional symbolism has been lost,’ he explains. BDB is his attempt to preserve the soul and spirit of Bolivia. He hopes to showcase Bolivian culture to the rest of the world by intertwining the technique of classical ballet and the symbolism of indigenous dances. ‘There are a lot of codes from our existing cultures that we don’t know about,’ Calla says. ‘The indigenous, the original – almost no one knows about it.’

With such matters at the forefront, what results is folkloric ballet that conveys a concrete sense of Bolivian identity. During the first five years of Calla’s school, BDB only performed outside of Bolivia as a strategy. The traditional garments and clothes came from indigenous towns, but the ballet itself was created for a foreign audience. They performed in Chile, Paraguay, Argentina, Brazil, and have received invitations to perform in Europe too. This year, however, Calla has decided to bring the dance back to its roots for the first time. The school performed this year at Casa de las Culturas, in La Paz, to represent the legend of the Loco Paya-Paya, a forbidden dance from the Yungas that is performed between midnight and 5am. For Calla, it is essential that his dancers do research and understand the concept behind every dance creation. He believes it’s what separates BDB from the rest of ballet organisations.

‘In La Paz there are a lot of groups that call themselves “ballet”,’ Calla says, ‘and whose directors have never seen or studied the art. My ballet is the opposite, full of morenos to represent the varied fabric of our culture. My goal is for this ballet to become the reference, interwoven with the native. I want people to know what we are wearing, what it represents, what it means.’ In this sense, BDB is a counteroffer to existing groups that Calla believes invent indigenous dances and erase Bolivian culture instead of cultivating it. His current school consists of 35 people, all of whom have to learn about the origin of a dances before they can perform it.

: ‘I want people to know what we are wearing, what it represents, what it means.’

Calla hardly has to think to sum up BDB in three words. ‘It’s easy,’ he says, ‘Indigenous. Disciplined. Passionate. Blending classical and traditional ballet fulfils me. I want it to fulfil others as well.’