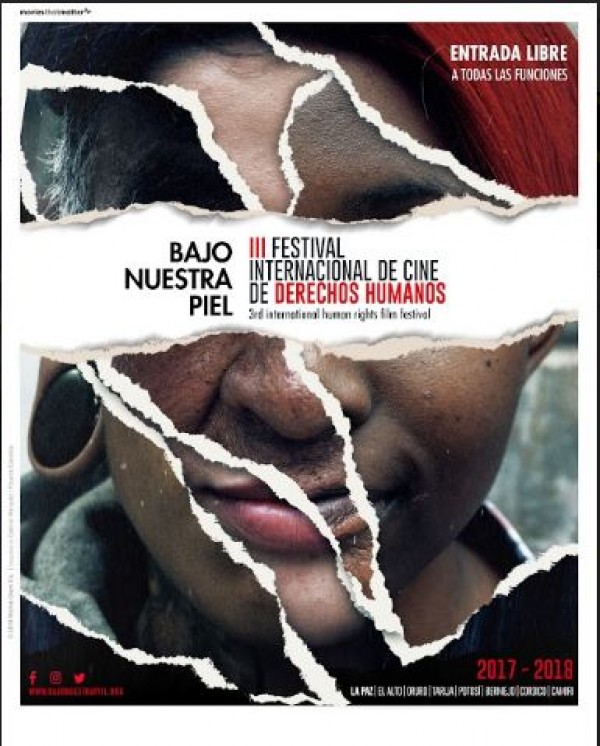 Social issues and The Arts

On 22 February 2018, the third edition of the international human-rights film festival Bajo Nuestra Piel visited Tarija, in southern Bolivia. Having premiered in La Paz in November 2017 with stops in El Alto, Potosí and Tarija, the festival is now touring to Coroico in April, followed by Camiri, in the Santa Cruz department.

Founded in 2016 by Simon Bongers and Ricardo Dávalos, the project originated in Oruro in collaboration with the local university and schools in an effort ‘to generate a debate and reflective space on human-rights topics through the artistic representation in the documentary, fiction and animation formats, of critical, socially comprised and quality cinema.’ Two years later, Bajo Nuestra Piel has an international selection of over 90 movies, including some Bolivian productions, presenting them free of charge in all locations.

Bongers’ vision and inspiration can be best summarised in the name of the festival itself: ‘There are some stories that can be written in books and others...under our skin,’ Bongers says. ‘We are all the same…We are all connected.’ He says there haven’t been any major obstacles in organising the festival, but the challenge remains as to ‘how to reach people who are not interested or aware of human rights.’

‘There are some stories that can be written in books and others...under our skin.’

From its inception, a main focus and driving principle of the festival is working with local schools to show stories that connect people. To that end, with the help of the Tarija municipality and schools, buses were commissioned to transport students to the screenings, who buzzed with excitement in anticipation of a school trip and the thrill of the unknown. One of the documentaries shown, Iron Legs, about lesbian girls on a Cambodian football team, introduced the students to a theme that is not usually broached in Bolivian society. Reactions were aroused during the screening and led to a slightly uncomfortable but necessary conversation on LGBT issues in Bolivia.

After the screening, Bongers led a question-and-answer session about the similarities on screen and in the teenage audiences’ lives. Most showings are followed by a discussion and debate with the audience, who interact with invited moderators. Bongers hopes to reach people who wouldn’t otherwise go to the cinema of their own volition. He wants to show perspectives and tell stories, which, although they are often undiscussed by audience members, are not so different from their own.

Reactions were aroused during the screening and led to a slightly uncomfortable but necessary conversation on LGBT issues in Bolivia.

As the festival travels around Bolivia, Bongers adapts the selection to make it relevant to the different cities visited. The next stop for Bongers and his team of volunteers is Coroico at the Unidad Académica Campesina-Carmen Pampa in the Yungas, from 4 to 8 of April. Films will be shown at the university in Carmen Pampa during the day, and, if the weather allows, there will be open-air screenings in Coroico. All showings are completely free, and all are welcome.