BACK TO THEIR ROOTS 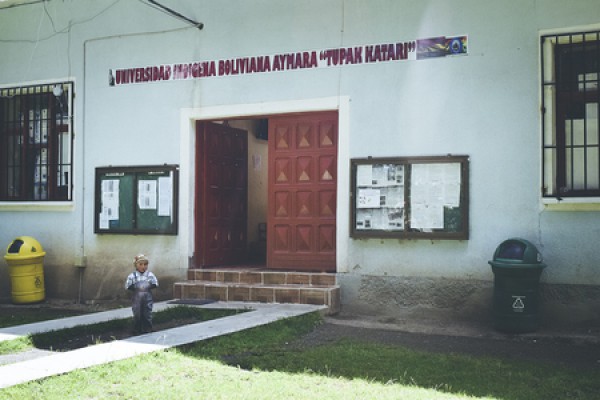 Bolivia's first indigenous university takes a step outside of the classroom, but just how far?

Imagine the serene expanse of Lake Titicaca rippling just metres away. Its distant shores are distinguishable from the sky thanks only to the thin green layer of hills that rise a little here and drop a little there. Here you sit, nestled among tall green trees whose shadows flutter on the ground, a cluster of buildings dotting the horizon. This idyllic image is not, in fact, the perfectly picturesque weekend retreat, but the campus of Tupac Katari Indigenous University.

Founded in 2008 as one of three institutions that form the Indigenous University of Bolivia (UNIBOL), Tupac Katari is the first higher education institute designed specifically for the Aymara communities of the altiplano. At present, there are roughly 800 students enrolled in the available degrees: Agricultural Engineering, Industrial Food Engineering, Textile Engineering, Veterinary Medicine and Animal Science. Each degree has a unique curriculum that focuses solely on the resources available to the Aymara people. The understanding is that upon completion of their studies, graduates will reinvest their knowledge back into their communities.

This is the first time this educational model has been applied in Bolivia, but similar steps have been taken in Perú, Ecuador, Chile and Colombia to respect and preserve the livelihood of indigenous peoples. All of these countries are engaging somehow with the question of an alternative system of higher education; a separate, indigenous university. The challenge here is clear: how do you harmonise the knowledge and practices of indigenous people with an essentially Western institutional model?

'When I was in university,’ says the current professor of plant sciences at Tupac Katari, ‘I had no option but to study in the city. We were so far away from the arable land that everything had to be done in the classroom. But here, the course is very practical and the majority of lessons are conducted outside.' This ensures absolute relevance, he says, not only for the students, but also for their communities.

I peek my head into classrooms filled with agricultural machinery and brush past students dressed in ponchos, polleras and abarcas. I attempt to listen in complete bafflement to lessons given in Aymara. This certainly doesn’t feel like an average university open day.

'We are very happy to have watched the University develop,’ says Damilo Kamtari, who is in his fifth year of Textile Engineering, 'we've grown up with it. We were selected by our communities to come here so we can help them grow. They have all the raw materials they need, but are lacking in the knowledge to best utilise them. That will be our role.’

UNIBOL is again unique in this sense: each community chooses one candidate to represent them. A local governing body named Fondo Indígena filters the recommended candidates who are then considered for admission to the university. Each branch of the Indigenous University of Bolivia has its own tailor-made selection criteria. The south eastern Guaraní branch, for example, chooses candidates for a unique program of study, one that focuses on the Forestry of the Amazon region, Fisheries Science, and Gas and Petroleum Engineering.

By designing a university system that serves the specific needs of local communities, the Bolivian government hopes to strengthen a larger process of decolonisation and supposedly subvert the Western educational model. It’s no coincidence, then, that the campus on the altiplano is named after Tupac Katari, an indigenous rebel leader who raised an army of 40,000 against the Spanish in 1781.

Rapid developments in the Tupac Katari campus promise further advancements to the courses on offer. I must have spotted at least three different construction projects during my visit that will become laboratories and technical classrooms. 'Not only this,' adds the professor I spoke with 'but there is an entirely new Campus to be built in Warisata.'

What the UNIBOL institutions are lacking, however, is national kudos. They are still in their infancy and are yet to be considered with the same regard as the more established, private universities. 'Graduates of Tupac Katari will need the support from external organisations when trying to find jobs’, the professor tells me. ‘Having political links in the area, for example, would make it much easier.'

Whilst the priority at Tupac Katari is definitely technical expertise, there is also a core academic program that is compulsory for all students of UNIBOL: the study of indigenous history. More than to add diversity and breadth to the courses on offer, this program is seen as essential for the students to build an identification with their own ancestry. The idea is that by learning the story of their ancestors, graduates of UNIBOL will approach indigenous social issues in the future with insight and respect.

It is inevitable to borrow some aspects of the Western education model for the progression of UNIBOL and the communities it serves; aspects such as progressive research and studied history that converge here with traditional thinking on a localised scale. Scholar Luciano Pedota refers to the creation of indigenous universities as a ‘dialogue of knowledges'; a harmony between tradition and modernity.

Perhaps this is not the complete reconstruction of Bolivia’s education system that Morales had envisaged, but the birth of a hybrid institution. Only time will reveal with what success Tupac Katari and its sister universities fulfil the potential for an original education system.