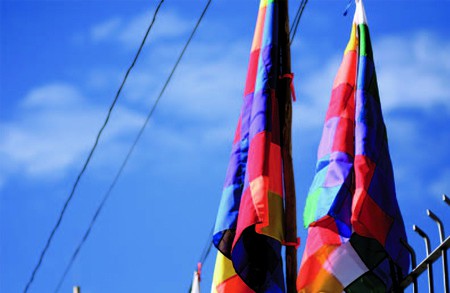 It is dispiriting (though perhaps inevitable) that Aymara, once the dominant language of large sections of Bolivia and neighbouring Andean regions, has become relegated to the backstage of everyday life in modern-day society.

Originating several centuries before the Spanish conquest, Aymara developed to become both a language and a culture marked by its bellicose spirit and commercial edge. During the Colonial era, Spanish conquerors attempted to eradicate indigenous languages and unify the continent under one language: Spanish. Because of education policies during this era, even the public use of indigenous languages (including Aymara) was punishable. While the archetypal helm-clad and lance-bearing Spaniards have long been gone, it is plain to see that their main legacy has been their language. However, their attitudes towards indigenous languages such as Aymara also appears to have lived on.

According to Sonia, student of Aymara at the Universidad Mayor de San Andrés (UMSA), part of the stigma that Aymara carries has to do “with racism and social status”. She tells me: “the world moves in English and since education is expensive those people who speak Aymara cannot even think about studying at university. Consequently, Aymara has a relation with the indigenous poor, not cultivated, less educated people so if you learn this language you are relating yourself to it.”

Sonia adds that however, “attitudes have been changing”. Not very long ago, it was unlikely for an Aymaraspeaking cholita to enter a bank and communicate fluently with the person across the counter, rendering inaccessible this and many other public institutions, such as many of the free museums around the city. Although they are allegedly there for everyone to enjoy, language barriers coupled with cultural prejudices can make them appear daunting to an Aymara speaker. But over the last few years, clear strategies have been established to try and promote the plurality of indigenous languages, especially amongst the younger generations. In 2009 the Bolivian government granted official national language status to Aymara, Quechua, Guarani (and 33 other indigenous languages) alongside Spanish. Another interesting move has been to set a requirement that all those seeking jobs within the government must speak an indigenous language to a certain level. Although it could be argued that this move has been symbolically motivated, it gives clear evidence that measures to promote the plurality of languages and the use of Aymara are being put in place.

Central to these changes is the current peoples president Evo Morales. He is the first indigenous president, who initially pursued llama herding before he settled into growing coca and became involved in the coca growers´ trade unions. Evo Morales is of native Aymara decent.

Pascual Gutierrez, professor of Aymara at the UMSA, admits that at university there has not been more interest in studying the course, which revolves not only around the language but also the culture. However, he adds: “in La Paz, when you take into account all the institutions where they teach languages, the number of students who study Aymara has increased. Not only this but most of the institutions which used to only teach Spanish, Portuguese and English, now teach indigenous languages.”

All this means that when civil servants are dealing with people from outside the cities they can actually communicate with the people they are working with. It means that children have the chance to learn the same language they speak at home while in school. It also means that young people recognize the importance of the indigenous languages in their own country. The influence of Aymara in the local vernacular is certainly palpable. Many Spanish expressions in Bolivia such as ‘chiji’ (grass), ‘llokalla’ (young boy) and ‘wawa’ (baby) are used and widely understood by Spanish speakers, many of whom don’t fully realise the indigenous origin of these words. When asked why she decided to learn Aymara, Sonia offered several reasons relating to culture and her sense of identity. ‘I lived in Uruguay for 6 months. During this time I realised that I didn’t know that much about my culture so I decided to learn more about it, about my identity, and therefore about Bolivia. In this area there is a strong Aymara influence on the culture, especially in this part of the country.’ Sonia also plays native musical instruments so she is keen to know more about their context and, as a civil engineer, she’s likely to need to work in the countryside where Aymara is more widely spoken.

As one might imagine, the prospect for Aymara speakers from the rural areas to attend even a public university are slim. A recent extension to the public university in La Paz which provides studies in topics related to land management and agriculture will hopefully reverse this trend.

This widespread increase in the teaching of indigenous languages and culture may not result in a simple shift in attitudes. Out of the several reasons Sonia gave me for studying Aymara one was ideological: “I think that since I have the opportunity to learn Aymara I should. The people who speak Aymara are more removed and may not have the opportunity to learn Spanish so I should try myself.” The minority Aymara speakers may have held themselves back without understanding that this would perpetuate a feeling of being ‘outsiders’. However, I am told that many use it to their advantage in certain commercial settings - using the language as a code used to conduct business with other people with whom they share an origin. Since Aymara is beginning to become more widely embraced, this could enhance the educational opportunities of rural inhabitants, and thus increase their chances of becoming economically prosperous. If this is the case, the entire population stands to benefit in the long run, whether they speak Aymara or not. The same could no doubt be said about any of the other 30 odd languages spoken across the country aside from Spanish.