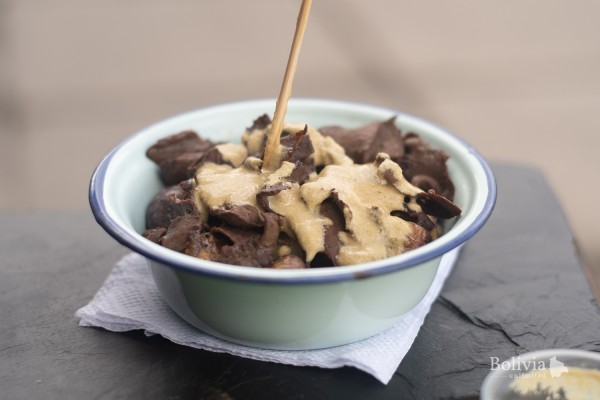 A photo collaboration by Azafrán Magazine, a special thanks to Alvaro Ruiz

The best street and market foods

This article was originally published in the issue 8 of Bolivian Express. It has been updated and re-edited.

People say that eating out in Bolivia can be hazardous, especially on the streets, and this is one area where travellers should not over-economise; the satisfaction accrued from saving the odd dollar here and there by eating in the markets and on the streets will soon be outweighed by the trauma of spending hours on the toilet. This I don’t deny, but there are just so many tasty local specialities to try that, as long as you’re careful and give your stomach time to adjust, it would be a real shame to miss out. After some research and having asked the locals where is the best place to try each snack, I hit the streets of La Paz and tried the lot... So far my stomach is holding out! From huminta to fricasé to llaucha, choosing was difficult but here are my Top Bolivian street and market foods. 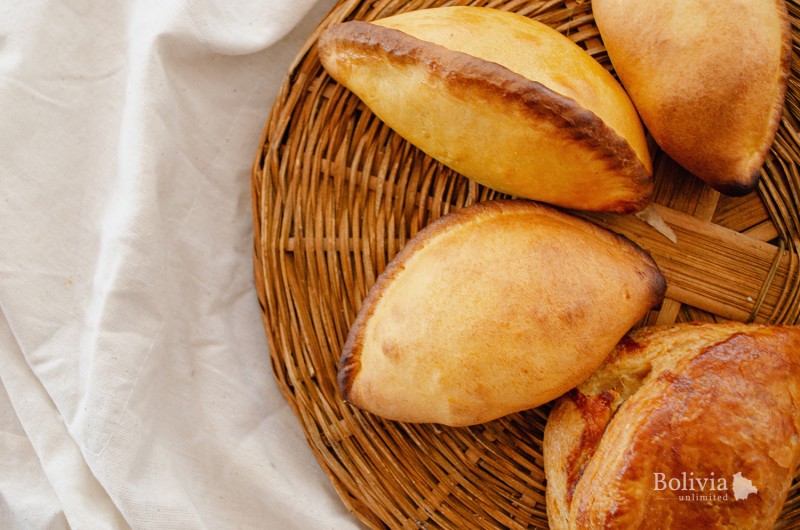 You can’t fail to spot the salteña, a meat or chicken pasty which is sold absolutely everywhere. Mostly eaten as a mid-morning snack, you will find salteñas being sold at little side stalls, on almost every street, any time between 9am and noon. These small and incredibly moreish pasties are usually filled with meat (although vegetarian ones are sometimes available), olives, and slices of boiled egg, and are completely irresistible. The trick is to eat them without spilling the copious amounts of sauce all over yourself (not very easy, particularly on buses or on the move).

‘It’s food that’s quick, easy and tasty to have on the go,’ says Doña Cecilia, who now recognises me I’m such a regular customer of hers! 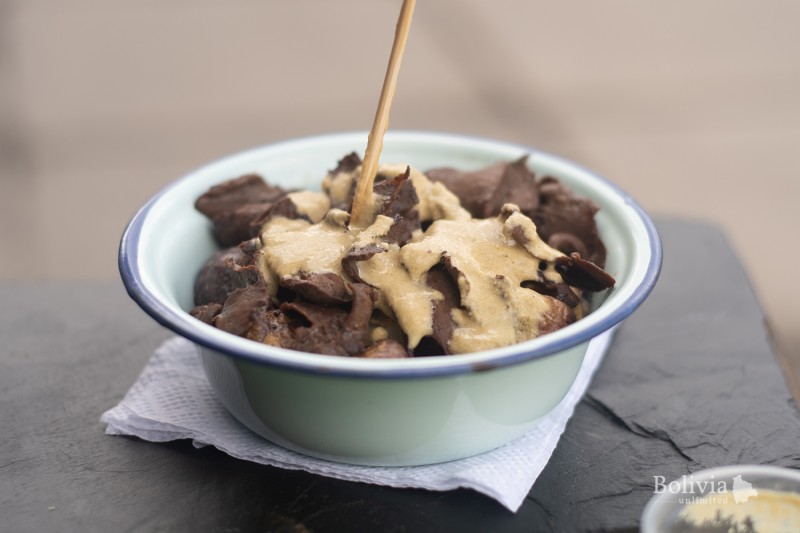 As the sun sets on the bustling city of La Paz, vendors set up their stands in anticipation of their hungry patrons on their way home from work. From hamburger carts to lomito and salchipapa stands, there is still nothing quite as tantalising as the thick, smoky aroma of grilled meat – I am of course speaking of the famous anticucho.

Since I first tried anticucho it has been a favourite of mine, even before I learned what they were made from: anticuchos are small slices of beef heart and boiled potatoes on a skewer cooked over an open grill. The meat, often marinated in spices such as cumin and garlic, and served with a delicious ají de mani sauce, is so tender I found it hard to believe it wasn’t just thin slices of filet steak.

The anticucho’s origin dates back to pre-Columbian times and it was a popular dish among the inhabitants of the Inca Empire too, with scientific evidence and documentation from the Peruvian National Library Archive which shows that the Incas prepared the dish using llama meat as well as other local meats. The name anticucho is an Hispanicised Quechua word ‘anticucho’ (anti = Andes and kucho = cut). It is still popular throughout South America, particularly in the Andean regions of Bolivia, Peru and Chile, with anticucheras readily found on many street corners.

‘It’s a very traditional dish, not just here in La Paz but throughout Bolivia. What makes it special is that it’s cooked over an open grill and not in an oven,’ explains Doña Bartolina. 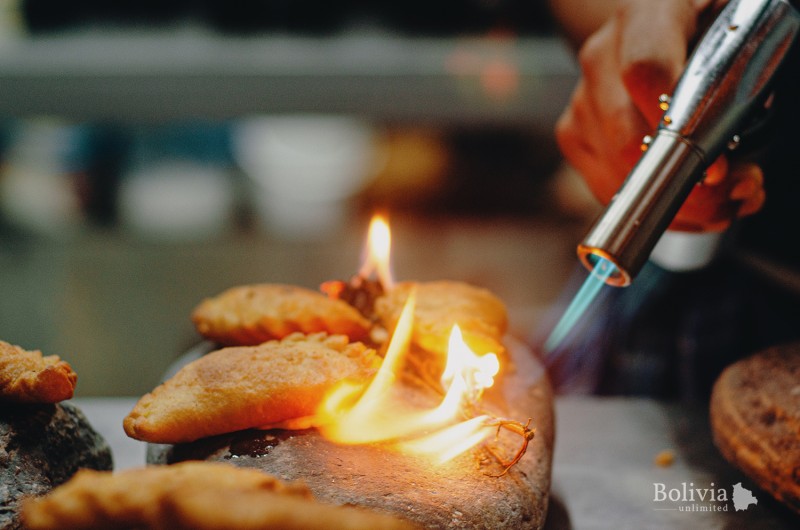 Also eaten as a mid-morning snack or brunch, a tucumana is similar to a salteña but is deep-fried rather than baked, and has a higher potato content. This crescent-shaped pasty is filled with meat (normally beef, occasionally chicken, or charque), potato, egg, onion and sometimes even olives, carrots, peas and other vegetables. At first I considered the tucumana as just a slightly inferior salteña until I discovered the giant ones at Rodríguez market – my point being that it really depends on where you try these things.

Chairo – ‘soup’ in Aymara - is a thick meat and vegetable broth typical of La Paz. It consists of Andean vegetables such as chuño and is flavoured with oregano and hierba buena. This soup would provide energy for the day’s work and nowadays you find it served in most markets at lunchtime. 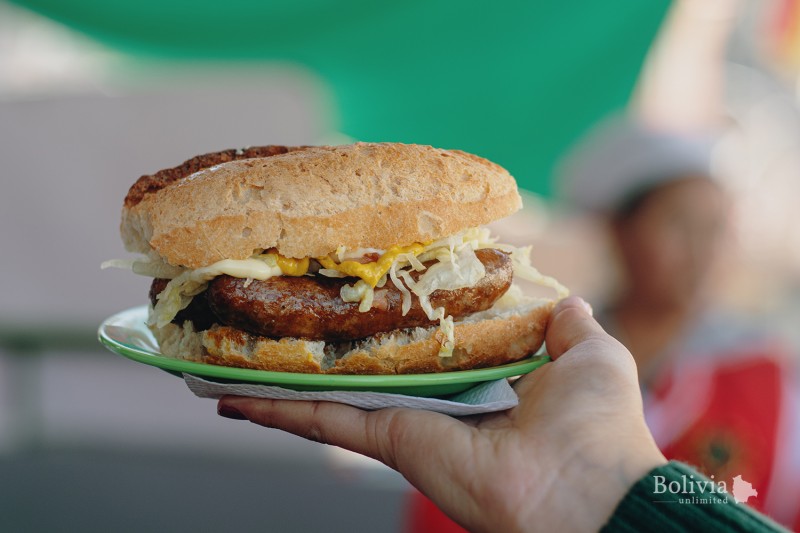 The simplicity of this nomenclature is brilliant. Choripán is exactly what it says on the tin: chorizo and bread - a heavily-condimented spicy sausage in a bun. As the caserita selling choripán on Plaza Avaroa told me, ‘It’s a great snack, whenever you’re a bit peckish, at whatever time of day,’ she adds ‘the chorizo is really tasty and it’s not too heavy or fattening.’ Also a very popular street food in Argentina, choripán here in Bolivia is usually served with chimichurri – an Argentinian sauce made with garlic, chili, parsley and olive oil. 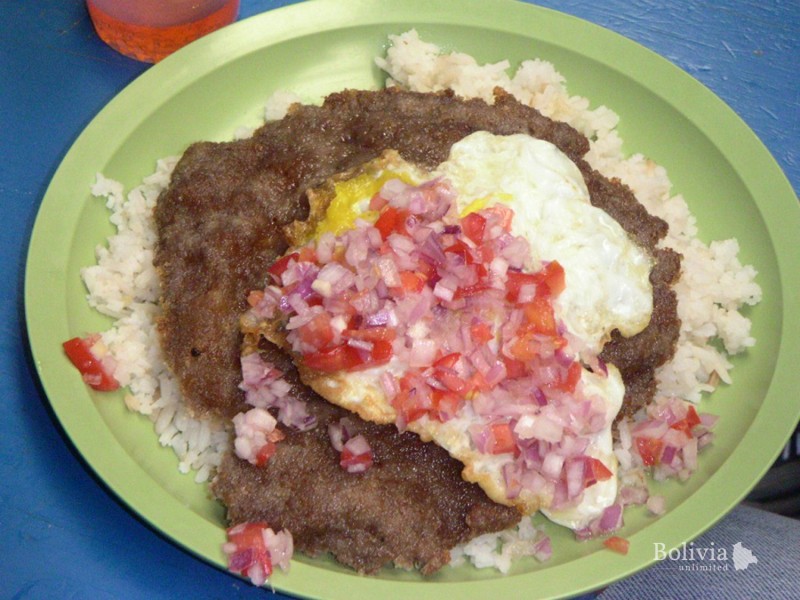 Silpancho is a popular Bolivian dish from Cochabamba, mainly served in markets rather than in street stalls. It consists of a thin fried breaded meat (a bit like a schnitzel) on a layer of rice and potatoes, topped with a fried egg and served with chopped onion, tomato and locoto pepper.

Like most traditional dishes in Bolivia, silpancho is a huge and extremely filling meal that certainly doesn’t skimp on the carbohydrates. 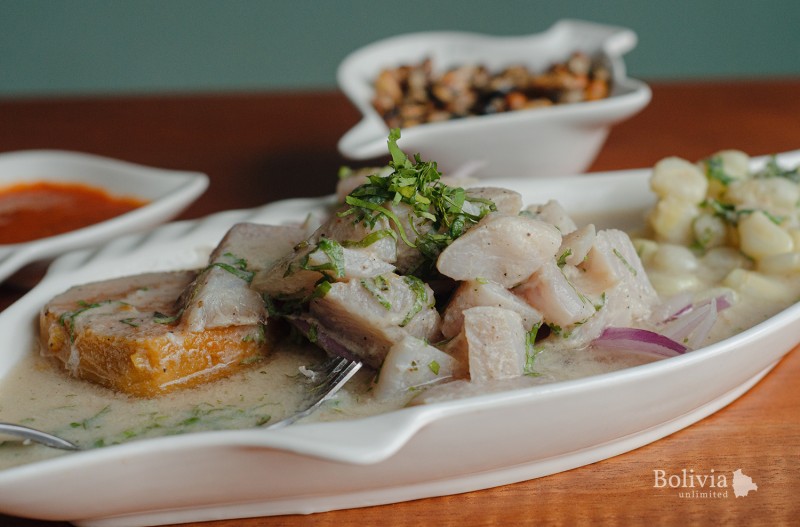 Although technically speaking ceviche is originally from Peru, it is so widely eaten here in Bolivia that even Bolivians often don’t know it’s Peruvian! The basic ingredient is raw fish which is marinated in lemon juice. The citric acid in the juice changes the texture of the fish, without changing its ‘raw’ taste. Ceviche is an old tradition in South America, dating back to the Incas who preserved their fish with fruit juice.

This tasty lemony fish dish is often served from little stalls on the roadside or around the outside of plazas or parks. However, be warned! The lemon juice ‘cooks’ the fish and alters the structure of the proteins, making it appear opaque and firm, but it does not kill bacteria and parasites as well as heat does. So, unless the fish is fresh and prepared in clean surroundings, ceviche can result in an unwelcome case of Atahualpa’s Revenge!

Ceviche is typically eaten at lunch or brunch and, because it is so light and refreshing, it is popular during the warmer months. 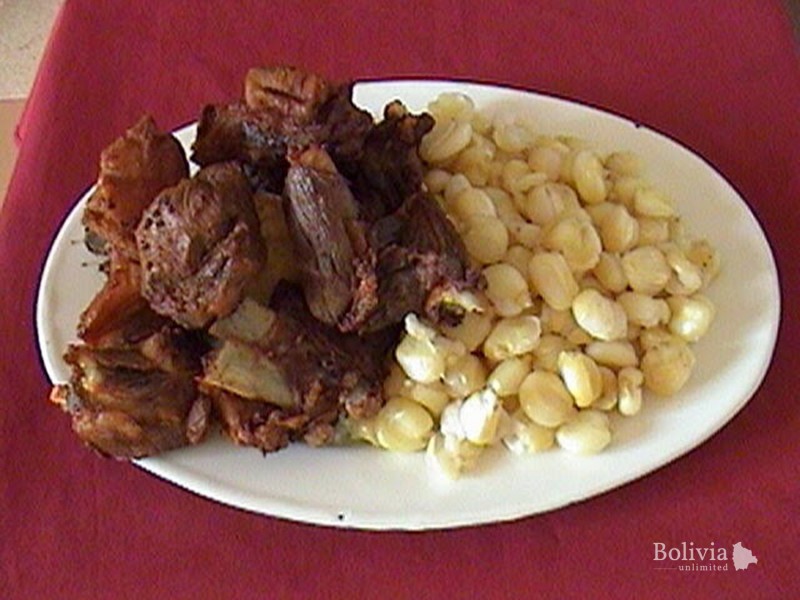 Chicharrón is deep fried pork belly which is first boiled and then cooked in its own fat. It is served with mote, chuño and tunta (another form of freeze-dried potato) and is also an ingredient in other dishes such as chairo.

Although not authentically Bolivian, or even South American, these street burgers are truly delectable! Made with fresh ingredients, including fried cheese, cooked on the grill, topped with plenty of chips and lashings of picante llajua sauce!