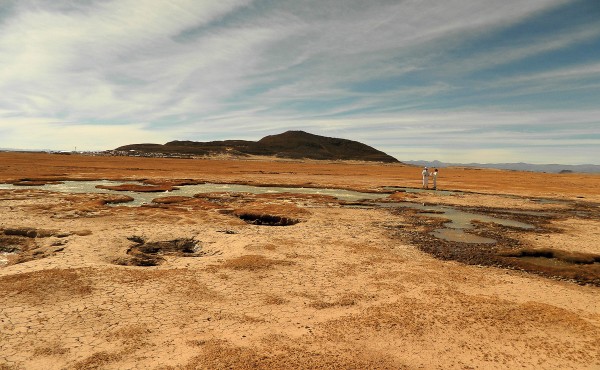 Searching for the lost city at Pampa Allaguas

When people imagine the lost city of Atlantis, they don’t tend to picture an arid, shrubby landscape miles away from the ocean. They think instead of a sunken metropolis, barnacled yet still telling of former glory, or they envisage the paragon of cities first described in Plato’s Timaeus. The semi-desert of Pampa Aullagas, around three hours from Oruro, is far from either of these depictions, but many take it to be the site of this legendary city.

Pampa Aullagas’ main feature is a cactus-covered hill, a single undulation in the flat, sandy surroundings. Its closest body of water, Lago Poopó, dried up very recently, and is now little more than a vast expanse of dusty, cracked ground. If you look closely, however, there are several enigmatic features that mark this place as a unique destination. Pottery shards, telling of some kind of former civilisation, litter the barren ground; the rocks are black, red and white, as Plato suggested; and the former canals that snake around the hill are caked in aquatic fossils and marine sand. These canals correspond in number and form to those in Plato’s story.

The Atlantis tale was originally understood to be no more than a myth. It wasn’t until the 19th century that people started to take it seriously. In 1881, writer and politician Ignatius Donnelly famously argued that ancient cultures weren’t advanced enough to develop concepts like language and religion independently and that they must therefore have come from another unknown civilisation –  Atlantis. Since then, the lines between myth and truth regarding Atlantis have become increasingly blurred. Nowadays, many explorers devote their lives to tracking down this potentially fictional city beneath the waves, guided by Plato’s description. Speculators have placed Atlantis in places as diverse as Greece, Cuba, Great Britain and, interestingly, here in Bolivia.

"The myth of Atlantis ‘connects us with a more satisfying and imaginative version of our origin. It is part of the mythological capacity of man to rewrite their history." - Marcelo Valero

The British cartographer Jim Allen, for example, concludes that the city of Atlantis simply couldn’t be anywhere else. Following Plato’s directions, he has come to believe that the impressive island ‘opposite the Pillars of Hercules’ is synonymous with South America. According to Allen, there can be no sunken continent missing in the Atlantic, since we can perfectly piece Pangea back together. He argues that the expansive artificial lakes in Moxos and the enigmatic Nazca Lines in Peru are only some of the remnants of Atlantean civilization. For him, the so-called kingdom of Atlantis, described by Plato as a level, rectangular plain surrounded by mountains, is none other than the Bolivian altiplano.

Apart from these geographical links, there are uncanny connections between the story of Atlantis and Bolivian mythology. In Greek legend, Poisedon carved out the island city of Atlantis from the hill on which his wife Cleito lived. In Bolivian myth, Tunupa, also the God of the sea, created Pampa Aullagas in a similar context. Some argue that Plato used Bolivian legend to write the Timaeus and applied Greek names merely to appeal to his readers. The name Atlantis, after all, has a Latin American origin.

Likewise, the local legend of the Desaguadero depicts a scenario similar to the one Plato suggests swallowed up the city of Atlantis. The sea has now receded after these theoretical events, leaving sparse and often nondescript ruins around South America, including those at Pampa Aullagas. Regardless of its mythological origin, the story of Atlantis remains alive in the minds of many, as evidenced by the cavern like 'Atlantis Bolivia' shop in El Prado, which is adorned wall to wall with photographic evidence and Atlantis­-inspired memorabilia.

In the midst of the intrigue, it’s easy to forget the glaring inconsistency in Allen’s theory, and all others that insist on Atlantis being a real place. It was most likely never meant to be so. It seems the stories surrounding Atlantis have proliferated due to our modern fascination with mystery. According to Marcelo Valero, a specialist in Andean culture, the myth of Atlantis ‘connects us with a more satisfying and imaginative version of our origin. It is part of the mythological capacity of man to rewrite their history.'

If we accept Allen’s interpretation of the Atlantis story, we also have to question widely-held theories about the age and origin of Andean civilization. This may seem illogical, but perhaps we should learn to embrace our curiosity and remind ourselves that conventional truths aren’t necessarily beyond contention. 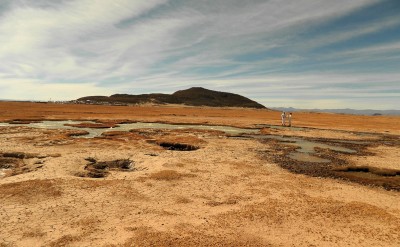