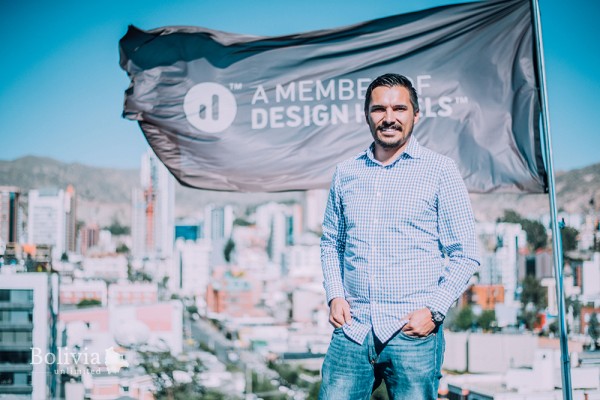 A new take on Bolivian hospitality

As we stand on the rooftop of the newly built, five-star Atix hotel, owner and co-founder Carlos Rodríguez poses for a picture as the sun shines in the background. Overlooking the beautiful sights of the upscale neighbourhood of Calacoto, Rodríguez explains the construction boom that has taken place here over the last ten years. ‘Things are always popping up here or there,’ he stresses, as he points at the nearest building in construction, which stands tall above the developing landscape. In less than a decade, Calacoto has transformed from a town dotted with small houses to a growing urban center brimming with commercial life. These new developments are creating a bold and modern new landscape.

Originally from Sucre, Rodríguez studied in La Paz for more than 14 years. He later ventured to Kansas City in the United States as an exchange student, before deciding to pursue a career in civil engineering. His position at Maxam, one of the world’s largest explosives manufacturers, took him worldwide, including of Kazakhstan, Spain and Panama. Little did his employer know, however, that the plush hotels he was put up in in became market research for the Rodríguez brothers’ future dream of opening up a luxury hotel. ‘I was working for five years with this company abroad, and by the third year we were contemplating having a hotel,’ Rodríguez tells me.

‘It all seemed to fall into place when my brother got married,’ explains Rodríguez. His brother’s new father-in-law was also interested in joining the pair to create the hotel.  ‘We decided to go all in to buy land and then started talking with the banks and the architect who designed it.’

The Rodríguez brothers saw a gap in the market. From the beginning they were set on the theme of representing Bolivian materials and culture: ‘There is a lot of great hotels in Bolivia, but most of them are trying to copy something from outside of the country. They are trying to do a version of the Marriott or a Bolivian version of the Ritz. We saw that nobody was doing [what we are doing],’ says Rodríguez. Inspired by this Bolivian theme, they began building the hotel, choosing the designers and presenting their originality to create something new and different. Two years and eight months later, the plush hotel stands out from the rest of the highrise buildings in the area.

From the moment Rodríguez arrived at the plot of land where the hotel now stands, he decided to use the rock that originally covered La Paz during the 1920’s and 1930’s for its construction. Architect Stuart Narofsky flew in from New York to design the project. ‘He tried to put a lot of Bolivia into the building,’ Rodríguez says, ‘and the interior designer was the same. She was designing the furniture and then creating it here, except for the beds, which had to meet high international standards,’ he adds.

‘We saw that nobody was doing what we are doing.’

But it wasn’t easy finding the right products to fill his hotel. ‘We struggled a lot,’ Rodríguez remembers. ‘Sometimes, we would find factories, but they would only produce their own models. Then we would find small producers who could not produce the quantities we needed.’ In the end, the construction involved four different carpenters. As Rodríguez shows us the different pieces that were created during this process, he points at the metal frame lamps hanging from the restaurant ceiling and at the tables made from tree trunks. ‘If you see the furniture and lamps,’ he explains, ‘all of them were made here. We are really proud of it.’

The theme of Bolivia is also present on the walls of the hotel. ‘We were thinking about having a lot of Bolivian artwork and thought about having one artist per floor. But that was really difficult because many of the artists didn’t understand what we wanted and had their own criteria,’ Rodríguez comments.  However, when they came across Gastón Ugalde, known as the ‘the most important living Bolivian artist’ or the ‘Andy Warhol Andino’, everything fell into place. Ugalde presented a selection of photographs and paintings to the hotel, some of which date back to 1990’s and others which he produced during a two-month sabbatical around the natural sights of Bolivia. You can spot one of the photographs in the hotel’s dining area, featuring four small children holding the A, T, I and X on an abandoned truck in the famous Salar de Uyuni.

The rooftop of the hotel houses Ona Restaurant, which translates to ‘gift’ in Pukina and strives to serve food made for Bolivians, by Bolivians and with Bolivian products. ‘It is very hard,’ says Rodríguez, ‘because many of the products in Bolivia – including tomatoes, lemons, etc. – are imported. So you struggle.’

Success came early for Atix, as it joined the Design Hotels team in its first year of operations. Joining this selection of high quality worldwide hotels, which accepts only 4% of applications each year, allows Atix to reach a different, larger and more creative audience.