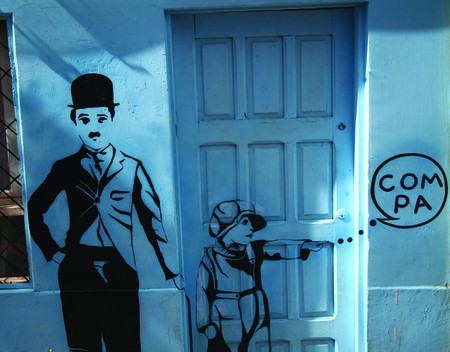 Connor Larson explores how art is helping El Alto’s youths find personal growth. A volunteer, an MC, and the Minister of Cultures Pablo Groux help her understand how their cultural expressions can also help society develop.

El Alto is a city of contrasts. The seeming lack of consistency in the appearance of not just the people but the city itself adds a certain indefinable charm, as though El Alto was not designed or planned, but simply came to be. A well-dressed businessman rushes past a begging mother, whilst a red traffic light leaves a brand-new SUV idled next to rusted taxi. Walking through the bustling streets, it's hard to believe that a mere sixty years ago this sprawling city was home to only approximately 11,000 inhabitants. Severe droughts in the 1940s, a subsequent agrarian reform, government-driven neoliberal initiatives in the ’80s, and a long-term national shift towards urbanization resulted in a mass migration of indigenous Bolivians to El Alto, transforming the insignificant airport town into the fastest-expanding urban area in Bolivia—though it has only been officially acknowledged as a separate municipality for twenty-five years. Today, though the city is infamous for its high levels of poverty and petty crime (this I can confirm, as I had my phone pick-pocketed there on my second day in South America), El Alto holds itself with an air of accomplishment and pride, a uniqueness acquired from its unusual community-based organizational structure, and its stance of defiance towards discrimination, in part caused by its mockingly close proximity to La Paz, Bolivia's contrastingly well-developed and beautified administrative capital.

​Citizens of El Alto—or alteños —are typically first- to third-generation migrants; a generation of youth having both indigenous and urban roots, at high risk of being marginalized and disregarded by elders unfamiliar with this 'dual socialization'.

How do the people of El Alto identify themselves in such an environment? For youth in particular, elements of racism, political exclusion, poverty and lack of proper education create a mixing pot of potential destruction in terms of self-identification. There’s also an inherent conflict between the growing Westernization of Bolivian society and a still-strong traditional indigenous background. Growing up in El Alto, youths risk marginalization, with a large amount of discrimination from the wealthier, whiter citizens of La Paz. But it isn't just the inhabitants of El Alto who are discriminated against: Bolivia as a whole has been exploited and its people disregarded by much of the Western world for centuries. Alteños not only live in one of the poorest cities in the country, but in one of the poorest countries on the continent.​ As a result, parents can overcompensate by trying to 'westernize' their children, giving them Spanish names and ignoring Aymaran traditions, leaving them with little sense of pride about their heritage. Lack of education is also a huge problem, with many youths leaving school at a young age in order to work and earn money for their families. This in turn provides no stable basis for the next generation to remove themselves from the poverty they were born into, creating a vicious circle. A lack of opportunities, little government support, higher-than-average illiteracy rates, and poor role models also deter these youths from breaking the cycle. Additionally, there is also a strong distrust of politicians, creating a rift between youth and government bodies, pushed further apart by the standard authoritarian parenting style, giving young Bolivians little influence, even in their own households.

The youth of El Alto have hence turned to their own peer groups in search of social approval, a change which could potentially have disastrous consequences. Interestingly, however, a diverse array of youth groups which channel their struggles with injustice through art, music and dance, have appeared. I spoke to Charlie, a volunteer for COMPA, the umbrella organization for Teatro Tono, a theatre space in El Alto providing free talleres for young people. The organization is housed in a building made completely of recycled materials, reflecting El Alto's 'inconsistency'. No two doors are the same, the walls are splotched with multicolored paint and doodlings, and a cylindrical staircase spirals through the building’s centre. 'It's a family here', Charlie insisted, when asked about the bonds formed among the youths at COMPA. COMPA tries neither to direct nor 'mould' the youth participants; its only ideology is 'we accept everything except fascism', allowing these youths to explore 'inwards, to their core', and find their own balance between their indigenous roots and the inevitable 'migration of culture to the West'. Another notable quality of this form of expression is that nothing is preached or forced upon these youths, they 'don’t supply the recipe, only the tools'. Thus allowing the children to find their own identity, and preventing a return to previous ways when the influence of the group is absent.

I went to talk to Minister for Cultures Pablo Groux about what development means in the context of culture. In our interview, he acknowledged the value of positive intervention without limiting youth in their expressions, explaining the country gives rise to ‘various hues of what you could define as cultural expressions’. Most importantly, he explains why his is a Ministry of CultureS, in the plural. ‘One of the reasons for this has to do with the variety of ecosystems and environments you find within these million or so square kilometres’, he tells me, and goes on to explain how ‘many of these are expressions of indigenous resistance which show the strong colonization process that took place here [...] We need to emphasise recuperation without overlooking new emerging cultural forms currently in the making’. The government show themselves open to supporting cultural initiatives which arise from civil society. ‘We try to support projects which arise from society without any type of restriction’. 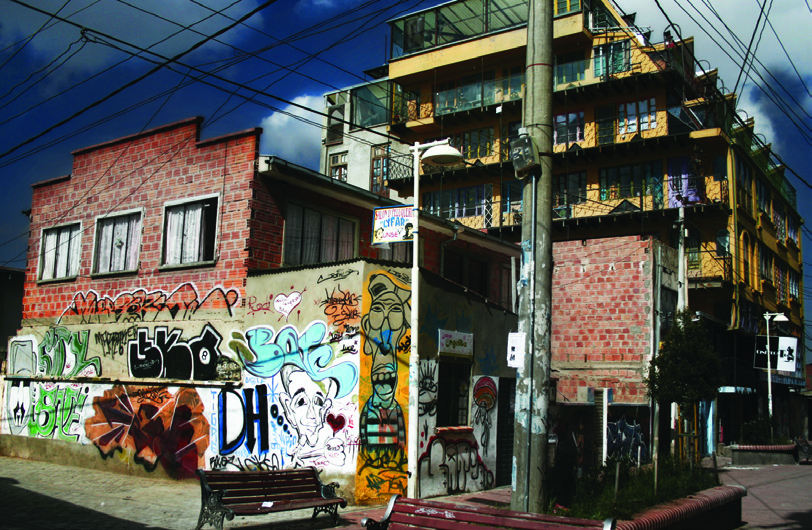 There have been many success stories: a program director was stopped on the street by a mother of one of the girls involved in COMPA. She began to tell him of her own upbringing and traditions, how her family maintained quite formal relationships, in which affection was never a priority. But her eyes lit up as she told of the changes in her daughter since being part of the theatre program. Not only had she become more expressive and affectionate with her mother, but she had hugged her for the first time in years. The program’s most commonly stated outcome is 'a big growth in self-confidence and self-love', and it 'creates an alternative for expression that’s nonviolent and nonaggressive', giving these kids a way to 'have a voice'. But it isn't just the youth who join these organisations directly that benefit from such cultural movements; these influences have also gained popularity beyond the streets, touching more lives than a single organization ever could.

Ariel Desmond, an MC I interviewed in La Paz, was not at all like I expected. He smiled shyly and chewed his water bolsita as I introduced myself in broken Spanish. After an hour-long interview three things were clear: he was in no way a thug or menace to society, he was very far from apathetic towards the struggles of his community, and rap meant more to him then a drum beat and profanities. Desmond first discovered his talent at a hip-hop marathon in El Alto in 2005. 'The competition brings us together', he comments when asked about the camaraderie that unites him to his fellow rappers. He tells of his first experience with hip-hop and how, on stage, he 'let himself free'. He agreed that hip-hop deters young people from drugs and crime, but accepted that he had his own 'rebellious stage', during which he found condolence in using rap as his 'diary'. Desmond epitomizes the positive benefits of these artistic movements. While Desmond doesn’t describe himself as a revolutionary, he says that ‘politics are in everything' and 'anyone who does rap is like a politician, his rap is his word'.

In a community where so few have a voice, Desmond's testimony of the benefits of self-expression through unconventional means is only one from a chorus of young people emanating the same expressive desires. Such is the impact of the movement that even those who aren't associated with an organization such as COMPA have began to explore the art of self-expression independently, with positive benefits. In such a unique, and in many ways unjust society, anything that allows the release of frustrations and exploration of identity through non-destructive ways should be greeted with open arms and an open mind.