Art Deco in an Ancient City 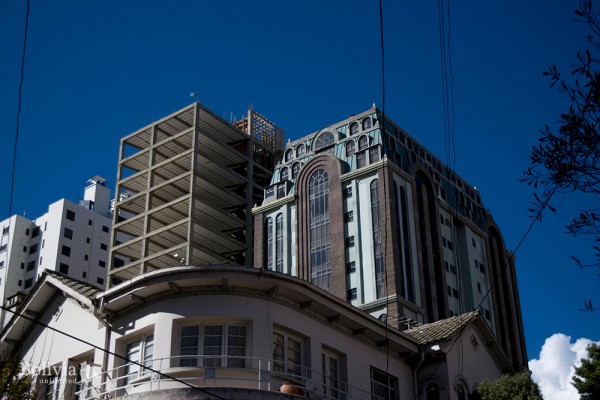 The Arts and Urban living

In a corner of the world where colonial architecture is more than common, La Paz’s funky fusion of Art Deco architecture and Tiwanaku design make it a destination like no other.

Geometric shapes, symmetry and the intricate use of lines are fundamentals of both Art Deco architecture and Tiwanaku design. The intriguing convergence of these two disparate styles gives La Paz its own distinct feel, particularly in the downtown neighbourhoods of Sopocachi, San Pedro and Miraflores.

The advent of Art Deco in La Paz is a result of ‘the French expression of power’ during the beginning of the 20th century, according to Gastón Gallardo Dávila, dean of the department of architecture at the Universidad Mayor de San Andrés. He says, ‘You have Art Deco [architecture] in South Miami Beach, in Cairo, in La Paz, in New Zealand...’ But, he boldly claims, ‘in France and the rest of Europe, you can’t find Art Deco.’

Bolivian architect, engineer and urban planner Emilio Villanueva was the first to combine the design conventions of the two styles to create a cityscape in La Paz that distinguishes it from the rest of the country, and even the rest of the continent.

Villanueva took much inspiration from the pre-Hispanic empire of Tiwanaku – the ruins of which are located two hours by minibus from the centre of La Paz – when he was designing much of the city in the early 1900s.

A revolutionary for his time, Villanueva studied in Santiago, Chile, in 1907 and later in Paris, and he played a large role in the modernisation of La Paz. Although he spent many years abroad, Villanueva always returned to Bolivia, and it is here that the fruits of his career are on display.

Early in his career, Villanueva designed La Paz’s City Hall and the Central Bank of Bolivia building using principles of Eclecticism – using unique combinations of different historical styles – in much the same way it was being used in Europe during that era. It was when Villanueva returned from studying urban planning in Paris in the late 1920s that he discovered his unique style and his work developed a distinctive paceño flair.

La Paz has its own distinct feel, a convergence of two disparate styles.

The Monoblock building at the Universidad Mayor de San Andrés in La Paz, designed by Villanueva in 1947, represents both the pinnacle and finale of his career as an architect. This behemoth structure is often considered to be typically ‘Bolivian architecture’, but as Gallardo says, it is in fact, ‘pure Art Deco.’  Its unique golden embellishments, Tiwanaku depictions and distinct line work, though, give it a Bolivian élan distinguishing it from other Art Deco creations.

As the head municipal engineer of La Paz’s local government in the early 1900s, Villanueva was as integral to the infrastructural planning of the city as he was to its visual appearance. During his tenure, Villanueva advocated for the opening of Avenida Camacho, an arterial connection between the city centre and Miraflores, which is still very much in use today, and where you can spot many Art Deco buildings.

Villanueva was as integral to the infrastructural planning of the city as he was to its visual appearance.

Villanueva not only created a distinctive architectural vision in La Paz that sets it apart from its colonial counterparts such as Sucre and Potosí, but he also preserved an ancient culture through its incorporation into modern design. The geometric order of the city’s Art Deco buildings stands in stark contrast to the chaos, crowds and colourful cholitas of La Paz.

Villanueva made La Paz a modern capital and began his design career in a country where architecture theory was essentially unheard of.  Villanueva, meaning ‘new village’ in Spanish, is a fitting name for the man who forever changed the form and function of La Paz.