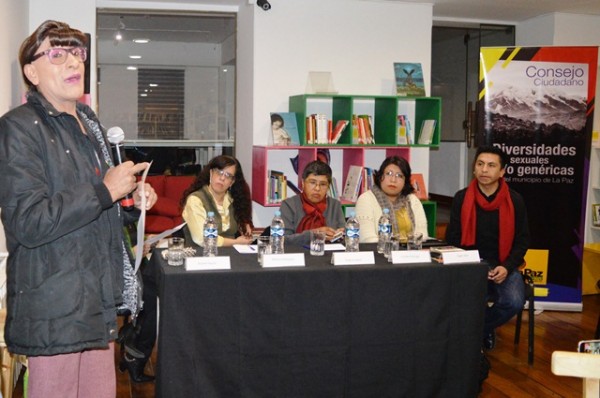 With a series of LGBT+-related events running over the last few weeks in La Paz, I discovered a ‘¿Literatura homosexual en Bolivia?’ panel, and, not knowing much about Bolivian literature, I was intrigued. The idea of a dialogue on whether such a literature exists in Bolivia clashed with stereotypical preconceptions I had of the machista culture present in Latin America. The question marks in the title were telling, at least for me, as the questioning of the existence of the literature would seem to imply a questioning of the LGBT+ community in Bolivia, or rather their visibility.

Before the event took place however, I had an interview with one of the participants, Mónica Velásquez, an award-winning poet and professor of literature at the Universidad Mayor de San Andrés. Velásquez took the conversation from a more literary point of view, claiming that the other people speaking at the event were ‘much more activist.’ We talked about how art and literature can allow someone to avoid reducing their work to their identity, citing one of her favourite poets, Fernando Pesoa, in saying, ‘Poetry invents subjectivities, and because of this you can have many voices.’ An interesting viewpoint, given the event Velásquez was soon to speak at was about a specific identity found in literature. She did, however, tell me, ‘I believe that one of the first functions of the art of these groups we have spoken about is about making them visible; art is testimonial.’ Velásquez further noted, though, that there was a danger surrounding agendas and ‘pamphlet literature’ or propaganda, that focusing too much on identity could diminish the quality of writing. The literature student in me tended to agree; the would-be activist was not so sure.

‘I believe that one of the first functions of the art of these groups we have spoken about is about making them visible; art is testimonial.’

I headed to the event itself the next day, where Rosario Aquím, Lourdes Reynaga, Virginia Ayllon and Mónica Velásquez were speaking. The four analysed the presence of LGBT+ authors, characters and narratives in the canon and debated the merits of intermingling activism and literature. The event was quite popular, with people crowding a small room at the Centro Cultural de España, which fittingly appeared to be a kind of library. The evening culminated in a brief interview with the organiser of the event, Edgar Soliz Guzmán, also a poet. When asked why the conversatorio was important to have now, he told me that government legislation hasn’t solved enough of the problems faced by members of the LGBT+ community. ‘There is a sort of invisibility that exists in the canon and society,’ said Soliz Guzmán.

Identity is in art but does not constitute it.