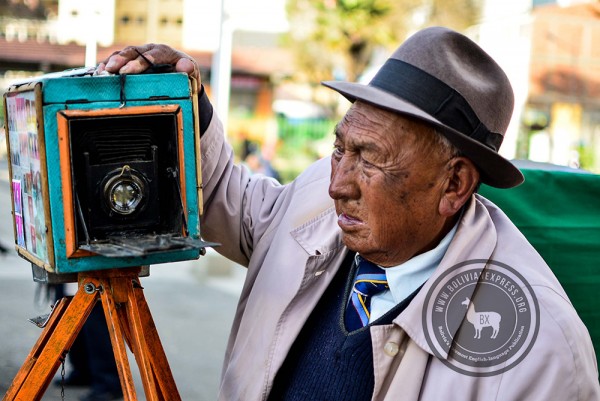 An intrepid traveller who spends his day relaxing in the square he has grown fond of and with his old friend, the sun, which has been inspiring his photographs for over half a century. He earns between 10 and 15 bolivianos per customer, offering a portfolio that includes a couple of small portraits he shoots with his old camera.

A master of light. A bronze-skinned gentleman wearing a grey jacket, clean shirt and striking tie. The esteemed 82-year-old photographer spends his afternoon astride a stool, under which he stores his equipment, and alongside his old camera named ‘Mobile machine’. Don Gregorio’s relationship with this square goes back over 50 years. He makes a living off portraits of paceños. He charges between 10 and 12 bolivianos for a set of 2 ID-card photos. After a long conversation swapping tales of our love of photography, discussing lenses and brands, this honourable man tells me about his style of work and how he had to adapt to technology to be able to continue in the field.

It turns out that Don Gregorio was one of the first photographers in Bolivia. He was trained by Marco Kavlin, whose family brought photographic innovation to La Paz. Kodak arrived to Bolivia bringing all the gadgets to teach the art of photography. Don Gregorio was amongst Kodak’s apprentices. But the interesting thing is that rather than the arrival of digital technology, it was counterfeiters’ low prices that put an end to this brand.

This photographer chiefly enjoyed travelling the country in military garrisons. He proudly recalls the good times: ‘I had the opportunity to travel all over Bolivia: Villazón, Tupiza, Los Yungas, Puerto Guaqui, the Chilean border, and many other places. In 5 minutes my photos were developed and ready, no matter where I was. This little box was more than sufficient for development, as well as great camera equipment, different lenses and tubes.’

‘Now I spend my afternoons here in the sun,’ he says, with a serene smile.

Our conversation became more and more enjoyable. He mentioned that the city government is urging them to continue using the cameras of yesteryear to preserve the square’s emblematic heritage, but says that this is no longer sustainable due to the cost of developing photos and the difficulty of sourcing the required materials. First and foremost, Don Gregorio would like to continue working with black and white film reel. But these photographers have had to modernise their methods to make their work profitable. They are artists who have survived the passing of time, but who retain their identity striking an amicable accord with technology. Don Gregorio showed me his new equipment and admitted that he has been using a digital camera for five years. 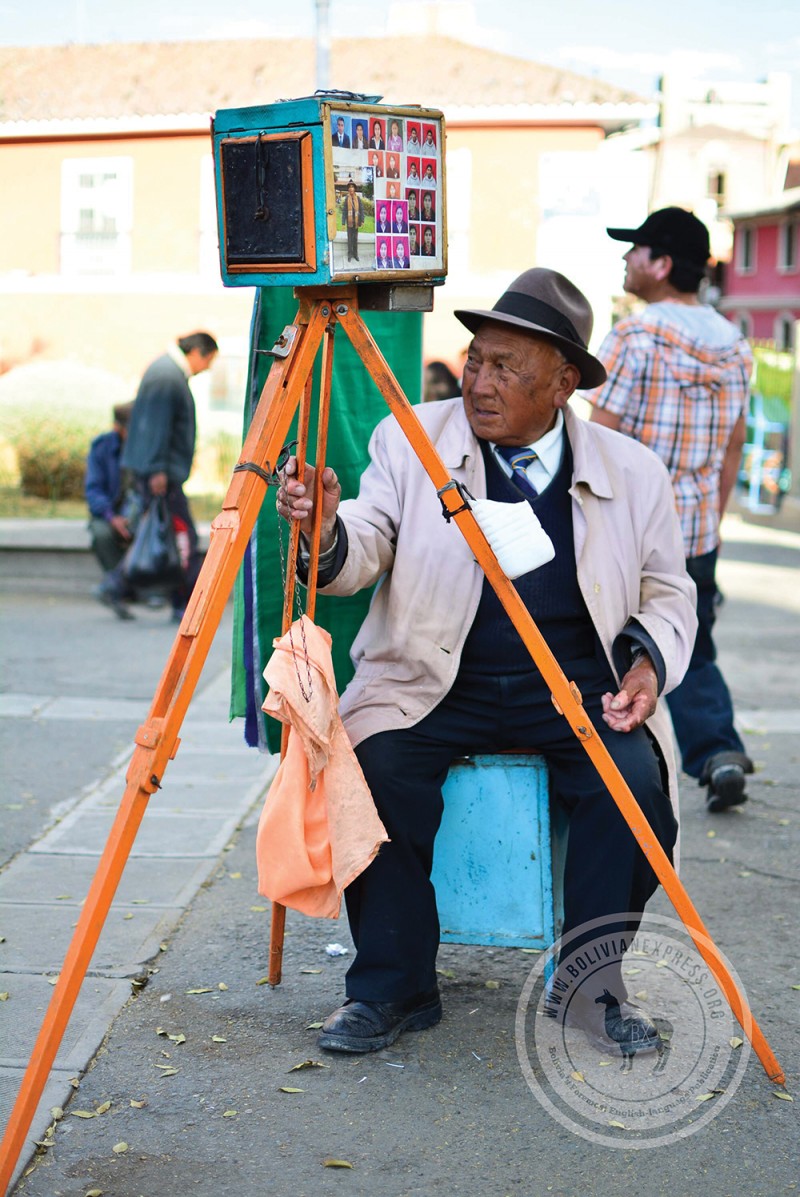 He uses a small, simple and discreet PowerShot camera and a printer that is hidden and padlocked under his seat. The brand new digital printer constitutes his entire studio, along with a couple of coloured backdrops.

As we chatted, a client arrived who wished to have her portrait taken. It was then that I witnessed Don Gregorio’s skills. Reading the intensity of the light, he oriented his seat to his subject; a lady in a traditional skirt. The sun is the only flash at his disposal, and I can testify that it is all he needs.

Don Gregorio is a member of a trade union made up of 600 independent photographers, and he lives entirely off this business, but says that it is no longer profitable. ‘Some young people come, but they quickly disappear because they say that they are not earning money. But I don’t have that option. I have been here for over 50 years. Photography is all I know. I’ve had a studio, I’ve taken portraits on my travels and I’ve been set up here for several years now,’ says the man who has seen the growth of this square, formerly known as Churubamba.

Many people seek him out because he is a well-known character. His most loyal and longstanding clients come to him today for portraits of their grandchildren. He is also sought by journalists and curious tourists who offer to buy his camera. He even appeared on television demonstrating his photo development techniques, and he has taught friends with an interest in photography.

These quirky figures who sit by their wooden tripods are greatly revered by society for capturing part of Bolivia’s history through their lenses; recognised for their modest but impeccable work that is capable of intimidating any professional studio.

I have now made a commitment to Don Gregorio. He promised to teach me his development techniques if I provide him with black and white film reel. Although many of his negatives have sadly been stolen, I am keen to see the work of this guardian of tradition; the composition of locomotives and the faces of traditional family life on camera reels never previously developed.