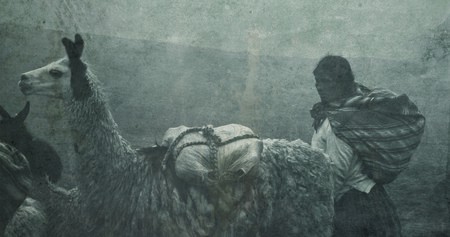 The immense Bolivian altiplano is a high plateau covering over 100,000 square kilometers between 3,000 and 4,900 meters above sea level. Its landscape varies from grassy fields to seemingly desolate vistas that recall the vast emptiness of Mars. Its climate is dry and cold; vegetation in some places can be sparse, with only shrubs, cacti and strange-looking yareta - a dry evergreen plant that hugs the ground for warmth and has a lifespan of up to 3,000 years. Temperatures range from 15°C during the day to - 25°C during the night. Compared to Bolivia's bio-diverse wetlands, the altiplano has scant vegetation and animals that live there must be of hardy stock. Most of the fauna are endemic species that are localized to specific and scattered territories which make their observation and protection even harder. These conditions impose severe limits on life-but that life is there and it is fighting for its survival.

The animals of the altiplano not only live in extremely harsh conditions, but they also have to face a vast array of dangers. Some of these dangers are relatively new, such as tourism and mineral extraction processes; others are old as humanity, such as hunting for food and fur or for ingredients for indigenous rituals and healing traditions. The habitat is also being damaged by agricultural growth from quinoa plantations and the breeding of non-native species such as cows and sheep. And increasingly, tourism has grown exponentially in the area. It not only affects the once-pristine view of the landscape (with tire tracks, waste and people), but it also has repercussions for the native plants and animals that will only increase in the coming years.

FAUNA
To understand that fragile ecosystem better, let's have a look on the most commonly known animals present. Llamas and alpacas, of course, are familiar throughout the world. However, there is a rich variety of wildlife to be found if one knows where to look. Let's start with the llama's cousin, the vicuna, a delicate and graceful creature that can be seen throughout the altiplano, most often in groups eating in the grassy plains during the day. Unlike the llama, the vicuna is untamable, and it is a protected and vulnerable species. Because its fur is finer than almost any other natural fibre and it cannot be raised in captivity, the vicuna was once almost hunted to extinction. But thanks to anti-poaching laws, the vicuna population is now recovering. Vicunas, which can be recognized by their light brown or cinnamon colored fur, are smaller than their Camelid-family cousins, which include the guanaco, the alpaca, and the llama.

The mountain viscacha is another easily spotted animal from the altiplano. An angry-looking rodent that's reminiscent of a big fat rabbit or wallaby but genetically similar to the chinchilla, the viscacha is quite common in rocky areas. It has short forelimbs, large hind legs, and a long, bushy tail. Mountain viscachas are eaten by local people, and their long and dense fur is used in clothing. Nonaggressive and gregarious, mountain viscachas spend most of the day among rocks and ledges.

Finally, the majestic flamingo: Most commonly known for living in the tropics, it can also be found in the altiplano, where it lives on lakes that freeze overnight. This colorful bird is most threatened by the increasing tourism in the area and mining in its habitat. The flamingo can be found throughout the world wherever there are salt pans, brackish waters or lagoons to exploit. Because it is dependent on bodies of water to feed and reproduce, it is not as mobile as other animals in the altiplano, which can migrate away from tourist traffic. Even if the number of flamingos remains stable, the bird's habitat can be easily disturbed by the presence and actions of tourists.

The altiplano also hosts myriad other less-known animals such as the suri, an ostrich-like land bird; The Andean fox; the Andean condor; the huallata, a type of goose; the tuco tuco, a large rodent; the giant coot, a flightless black bird; the Andean puma; and a host of different sorts of lizards. The Reserva Nacional de Fauna Andina "Eduardo Avaroa" (REA), a nationally funded reserve in the Lipez province of the Potosi department in the southwest of Bolivia, is home to two species of fish, four species of reptiles, five types of amphibians, 23 species of mammals and 80 species of birds. Mainly dedicated to the protection of flamingos, suris and vicunas, the REA was created in 1973 to protect the vulnerable species present by regulating human visitors. The REA also educates visitors about the dangers of pollution and other human impacts to the ecosystem.

The Bolivian altiplano is such a vast region that one cannot present an exhaustive list of all its wildlife. Moreover, because of the altiplano's immensity and inaccessibility, few studies or monitoring of its animal population has been done outside of protected reservations, making it difficult to give an accurate depiction of the wildlife in the region.

ECOLOGIC IMPACT OF TOURISM
Only twenty years ago, the altiplano was mostly untouched by global tourism and industrialization. However, human impact has grown more pronounced recently with a nearly twenty fold increase in the number of visitors over the last 13 years-approximately 80,000 visitors a year now. Tourism and technology have made this formerly quiet corner of the world accessible to the masses. Now, jeeps roam through the desert and plastic bottles and bags, cans and all sorts of human waste-including diapers-disturb the wilderness and contaminate the soil and water. Moreover, visitors disturb the flamingo breeding sites when they get too close to the wild birds. According to Dr. Omar Rocha, executive director of BIOTA, an NGO dedicated to the protection of the biodiversity of Bolivia, common sense rules need to be respected, such as maintaining distance when photo-graphing the birds, not feeding them and not disturbing their eggs.

In addition to tourism and its impact, industry can create disturbances that the animals encounter. For example, Laguna Colorado, also known as Red Lake (for the color of its algae-rich waters), is threatened by borax mining and geothermal development. The construction of hostels with no proper sanitation systems also threatens the flamingo population, along with egg harvesting by the local indigenous population.
Simple things such as eco-friendly infrastructures and well-enforced tourist paths can be implemented to regulate the flow of tourists. Awareness from visitors is essential, but Bolivian guides must also follow the basic rules to respect the flora and fauna of the altiplano and prevent the negative consequences of mass tourism. As visitors, we need to be reminded that visiting the altiplano is a privilege and that the ecosystem we are stepping on is extremely delicate. We affect the ecosystem by just being there. There is much more than the eye can see - let's not be blinded by the beauty of the sights and remember that there is life out there and that we are guests in their environment.