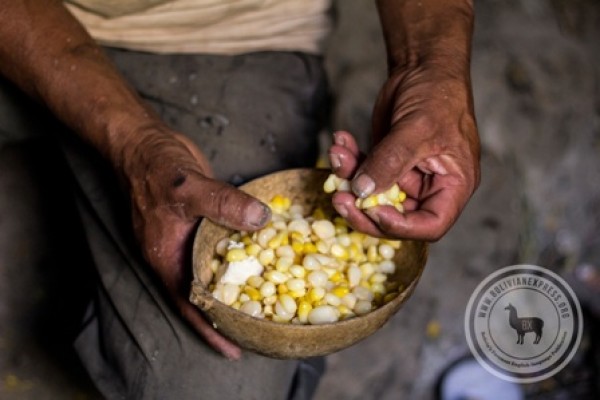 Corn, family, and anti-colonial resistance in the fermented drink chicha

Soft morning sunlight filters through a rectangular hole in the metal roof, a high ceiling hovering over the brick room. I can only imagine what the orchestral sound of rain pounding onto the corrugated tin would make when it visits the small village of Tarata, an hour south of Cochabamba.

A tentative beam of light hits rising steam, illuminating the chilled, dark room with silver wisps of warmth. The room smells of soft fermentation, of a bowl of cereal left one too many nights in the kitchen sink, of a forgotten tea bag found weeks after the caffeine high. A fire crackles humbly beneath a bubbling cauldron-like structure, and the sharp notes of smoke balance out the sour stench of the slowly fermenting chicha.

We have been invited into Xenón’s chicharía, a space reserved for the creation of the ancient Andean drink chicha, a fermented mixture of water and maize. Chicharos in this region make chicha using choclo, a type of juicy, white corn native to the Andes. Xenón’s family has been brewing the beverage for longer than he can recall.

In this valley region of Bolivia, the role of chicharo passes through the male line of this family, but Xenón has no sons to his name. Nevertheless, he works tirelessly, silently scooping the hot liquid between vats to accelerate fermentation.

Xenón handed us a large gourd full of the murky, golden-tinged liquid and urged us to try it. We each took a tentative sip. We could taste the sweet fermented taste of kombucha. The chicha felt smooth in the mouth but sharp on the back of the throat. Looking up expectantly to give our thanks, Xenón scolded us for not finishing the serving in one go. Sheepishly, we stuck our heads back into the bowl and gulped down the dregs.

While in Tarata, we stumbled upon a chicharía full of men of all ages playing dice and sipping the drink at 10:30 in the morning. They greeted us with warm handshakes and single kisses on the left cheek, offering sips from their cups. Such congregations have defined this community for thousands of years.

Chicha’s origins are, much like the drink itself, quite murky. Although the exact date of its inception has been lost to collective memory, chicha has served as a central part of Andean daily life for millennia. Spanish colonists coined the umbrella term chicha to describe both alcoholic and non-alcoholic derivatives of the maize-based drink, found all over South and Central America, effectively erasing the history of the varied tradition with colonial violence. Thus, Peruvian chicha morada, made of purple maize, resembles a dark red wine, while chicha de jora, made of choclo, has a golden hue. Chicha found in the Peruvian village of Pinchoyo is served with small chunks of maize.

As brewing techniques vary from chicharía to chicharía, the categorisation of the drink and its various forms is far from complete. This evasion of classification serves as a powerful form of indigenous resistance. Chicha is the people’s drink.

Traditionally, choclo is blanched and then masticated, mainly by female members of a community; chewing the maize helps release specific enzymes that later aid in the fermentation process. Although most chicharías have long since traded out mouths for mashing tools, the tradition still stands in some communities today.

In Tarata, chicha is brewed in the early hours of the morning, before the noon sun overwhelms the quiet town. Daily maintenance is minimal – as with most fermenting substances, the process regulates itself.

Four chicharías lie in quick succession just beyond Puente Melgarejo, a bridge built into the middle of the street, where, legend has it, generals would celebrate military victories with chicha-fueled dancing. Celida Tapija owns the chicharía two doors to the right of the bridge. She wears a bright red apron atop her floral shirt and serves us lunch as she patiently explains her brewing process.

Having visited three different chicharías and spoken to their respective chicharos, we discovered at least two alternative ways to make the drink. They each, though, agreed that the complete process lasts a week. This starts with the harvesting of maize, followed by the drying and crushing of it. With this, mucu is created, a dense substance that will eventually become chicha. On the second day, the mucu is boiled, drained, and boiled again. Then the compound, called arrope, must be put back into a large clay pot for another day. On this third day, it is drained again to separate the residue, and to be mixed by a large wooden stick called a mis’keta. Finally, the liquid is ready to ferment for up to four more days.

At the artisanal chicharías we visited in Tarata – rumoured to offer the best chicha in Bolivia – chicharos don’t export their chicha in any sense; they don’t even sell it at the local mercado. The only way to try the drink is as it was originally meant to be tasted – fresh out of the warm clay vat, sitting on a plastic stool, surrounded by laughter under the warm sun. 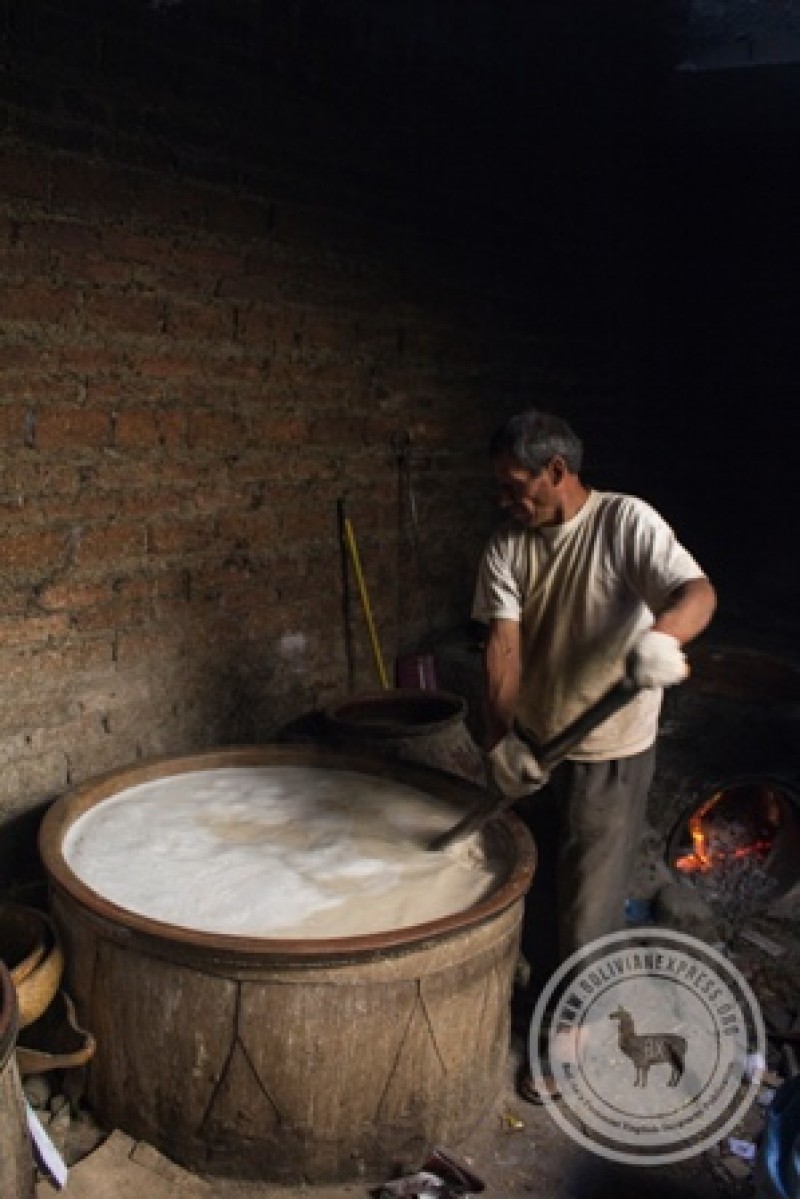 Xenón’s family has been brewing the beverage for longer than he can recall.

Over lunch of fried chorizo and boiled choclo, Serrus, a local, tells us chicha could be dangerous if ingested in large quantities. Twenty minutes later, Esperanza, who works in the chicharía next door, boasts that she sips the good stuff eleven hours a day. Whether drinking chicha religiously or casually, supporting local chicharías remains a steadfast and important part of the culture here, and perhaps provides recognition to the local resistance.

Chicha is the people’s drink.