An Ode to Andean Cuisine 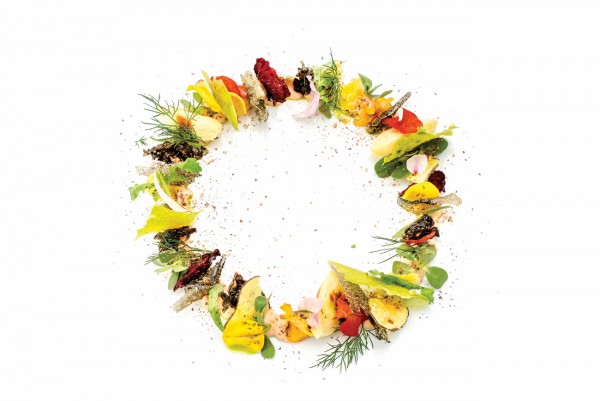 While living in La Paz, I have inherited much of Bolivia's food traditions, from early morning salteñas to chuño and choclo for lunch on the altiplano, and from the countless soups to anticuchos after a night out. Which is nothing to say of the enormous amounts of pollo frito. These dishes are some of my favorites in Bolivia, as they are for millions of Bolivians too. Basic ingredients such as quinoa, potatoes, and yuca are characteristic of the Andean menu, and they’ve also become part of the much of the rest of the world’s diet.

Ona Restaurant is a new gastronomic establishment in town, and it celebrates the culinary traditions of the country by presenting an innovative menu. It is located in Zona Sur, where a gourmet dining scene has flourished over the past few years. Ona is located in the Atix Hotel, and it opened its doors officially in December. The young chefs here offer an a la carte menu as well as an attractive prix fixe of seven courses that provides a tour of the flavours and tastes of Bolivia.

Head chef Juan Pablo Reyes explains the concept of the restaurant, which focuses on remembrance and memory.  ‘In our menu, we bring up flavours that people remember,’ he says. ‘It is maybe aesthetic, but the idea is that when guests come to eat here, they will recognize the flavours of the food and relate it to their memories.’

Reyes and his team transform these memories into mouthwatering gastronomic delights. ‘We mainly work with fresh, seasonal and locally sourced ingredients, and apply different techniques to the preparation of the dishes,’ says Reyes. The ancient Andean ingredients are transformed into new culinary experiences by modern techniques. Traditional and known flavours are given a new presentation.

As I’ve only been living in La Paz for three months, I am curious if Reyes’s menu allows me to recall my short-lived Bolivian culinary experience. The starting cocktail is promising; Andean gin La República served with local herbs evokes memories of nights out in La Paz. The next item, yuca shaped into a carrot, was followed up by a must-have on any Bolivian menu: soup. The creamy base of native potatoes might be a safe choice, but the additional beet tortellinis stuffed with more potato give it an extra culinary touch. Continuing my fine dining journey, I try a pretty and fine-tuned plate consisting of smoked trout cream buried under a bed of Andean seaweed, native potatoes and lettuce.

After devouring these small dishes, I'm ready to be surprised by the main courses, but first a refreshing lemon-based sorbet to prepare myself. More trout is served, this time fried and marinated in herbs and grains accompanied with a variety of potatoes. It reminds me of my journey to Lake Titicaca, where this delicacy is farmed. Then I enjoy an entrecôte served with typical products of Bolivian soil, such as callampa mushrooms and arracacia. And last but not least, a scoop of cinnamon ice cream, traditionally eaten in the country’s plazas by many Bolivians on the weekend.

After more than satisfying my appetite, I reflect on the meal. The flavours and tastes presented were not unknown to me; the ingredients that were used are common in any Bolivian kitchen. The menu translates into my memories of Bolivian food; I recognize the different components of the dishes and relate it to the food I ate.

The chefs at the Ona – which means ‘gift’ in Pukina, a now-extinct language originating on the shores of Lake Titicaca – have succeeded in executing their concept. I will remember this experience, dining on new interpretations of traditional Andean cuisine, as an exciting summary of the flavours I have enjoyed in Bolivia.