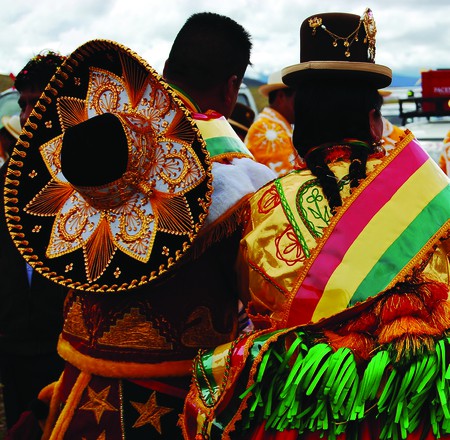 Love is a social construct created by the smallest social unit: the couple. It can be defined as a way of acknowledging the individuality of the other, of accepting and supporting their happiness.


The scientific study of love began in the last two decades of the twentieth century from the research of social psychologists. American psychologist, Robert Sternberg looked into the concept of love and based on factual analysis identified three universal components of love: passion, intimacy and commitment.

Prior to my investigation, the concept of love and romantic relationships among the Aymara had been studied from anthropological and historical perspectives. The existing bibliography identifies three key influences for this culture: the Incas, the Hispanic colonial domination, and more recently processes related to globalisation.

Using the methodological parameters of Sternberg, I studied the components of love in a group of 435 Aymara university students of the Unidades Academicas Campesinas in Tiwanaku, Pucarani, Batallas and Carmen Pampa; two thirds of the subjects were female and one third male. The results showed the predominance of commitment and intimacy over passion, thereby defining the Aymara romantic bond as being one of companionship and friendship.

The life cycle of the Aymara couple establishes that romantic relations are secondary to the working needs of the family, and even today there are rural communities where parents arrange marriages for their children. The Aymara consider the process of falling in love as a nuisance; insofar as it involves attraction and desire. Sexual pleasure has been repressed and is avoided as a part of married life in both rural and urban areas.
Marital status is crucial in Aymara society, because people are only recognized as such when they are married. The process of ‘becoming a person’ (jaqi) follows a complex system of rituals. Four different stages have been identified by Albó: Sart'asiña [proposal]; irpaq'a [engagement announcement]; sirw i skiwa [pre-marital state, which comes from the spanish servir]; kasarasiña [to get married]. To these four I have added the wayllusiña [to fall in love], which starts the marital life cycle.

An analysis of the life cycle of the Aymara couple necessarily derives from an examination over the situation of the woman subjected to her husband, to her own family and her political family. To create a mature love unit, a childhood history of emotional stability is required. This search of protection and comfort is termed the ‘attachment system’. A safe attachment implies seeking refuge with the adult caregiver in response to threats. An insecure attachment causes the need to escape from the person who should be caring for the child, or them developing intense feelings of anxiety regarding separation.

The Aymara way of parenting produces a form of insecure attachment. Considering how the attachment is closely connected to the way loving bonds are established, it is likely that this type of attachment found in Aymara children leads to a fearful attachment in the couple, bringing about distrust and fear of dependency.

Thus, the configuration of the 'companionship' model of love among the Aymara may be a result of the following three factors:

a) Insecure attachment: Raising children in the Aymara culture, either in the countryside or in the city, is structured around repressing the mother’s affection and tenderness towards her child, compounded by the frequent use of physical punishment.

c) Aymara Machismo: The levels of passion are lower in women than in men, and they insist less on commitment, which may be associated with the fear of male violence that these women often develop.

Aymara women are victims of abuse perpetrated not only by their spouse, but also by his family. The sirwiñaku is a custom to test the strength of the woman; mother and sisters-in-law seemingly make every effort to make her life impossible, treating her as a maid serving the family. One reason for the migration of young Aymara women into the cities is to escape from the sirwiñaku. As well as this, it’s a rejection of the way formal romantic relationships are structured and what this implies: the restriction of freedom.

Aymara society has survived the domination of the Incas, the ignorance and racism of the Spanish conquistadores, the infamous subjugation and discrimination of the imperialist ideology in the 20th Century. Although none of the above managed to destroy the Aymara, in order to overcome them, they had to renounce pleasure and remain stoical. The meaning of life was traditionally focused on the welfare of the community at the expense of the individual; working the fields gave refuge to woes and offered a way of achieving something immediately, in order not to have to face the uncertainty of tomorrow. Aymara pride has remained firm through keeping the past alive, maintaining admiration for their ancestors and respecting nature. However, sensuality was diminished, sexuality became limited to reproduction, romance was censored and amorous passion repressed.