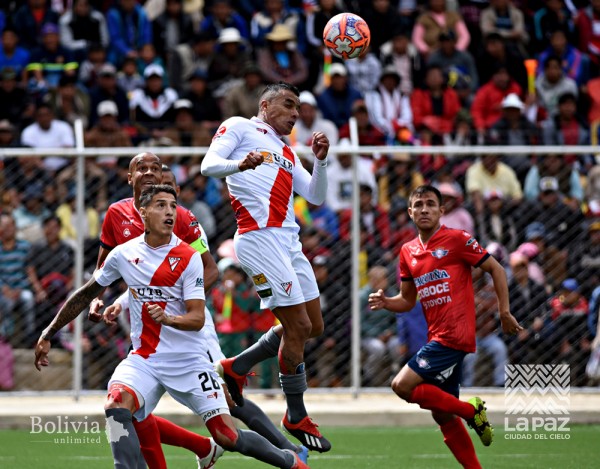 It's halftime at the Estadio de Villa Ingenio on a ferociously sunny day in a dusty corner of El Alto. Always Ready are two-nil up to Real Potosí, and ‘the Red Fury’ – the self-styled moniker of the most hardcore home fans of Los Millonarios, as Always Ready are also known – are taking a well-earned breather after a half of chanting and jumping up and down on the concrete terraces. The trumpeters are washing their instruments and slapping water against their faces; the models are taking selfies and comparing outfits; the horde of shirtless teenagers are hiding from the sun, chatting with their friends underneath a canopy of flags. This is the calm in the centre of the storm, and my chance to take up a position in the heart of the Red Fury to join in the action in the second half. I'm a little nervous – even though most of the hardcore fans seem slightly younger than me, there is no mistaking that these are bona-fide ultras (the term for South American fanatics who can be compared to English hooligans – except with full brass bands and all black uniforms instead of Stone Island, beer bellies and violence). I am an ultra-in-training, trying to blend in with the true faithful. A burly-looking teenager walks up to me with a deliberate look on his face – am I to be booted out of the Red Fury’s turf and made to sit with the casual fans? He reaches an arm out towards me: ‘Hola, brother!’

A brief sketch of the history of Always Ready looks something like this: They were founded in 1933 by a group of La Paz schoolchildren, who took the name ‘Always Ready’ – the English translation of the scouts’ motto siempre listo. They chose to have an English name, like many Bolivian clubs, as a nod to football’s fatherland and the country that first brought football to South America through missionaries, business and war. They were a founding member of the Bolivian football association, and it is crucial to note that prior to the 27 years in the wilderness of Liga B, they were seen as one of the biggest clubs in not just La Paz but Bolivia itself, finishing as high as second in the national league in 1967. However, if there is one year that defines Always Ready it is not 1933, the year of their founding, and not 1961, when they had a heralded European tour. The year that defines Always Ready is 2018, the year the club was promoted back to the Bolivian first division and when they moved from La Paz to El Alto.

El Alto is one of the fastest-growing cities in Bolivia and was only officially founded in 1983. Despite being cheek to jowl, La Paz and El Alto feel worlds apart. La Paz is cosmopolitan, the centre of government and tourism in Bolivia, a city of steep hills, breathtaking views and apartment tower blocks. El Alto is dusty and completely flat, with a red brick grid-system sprawl of unfinished construction. If La Paz often feels like the setting for a classic western film, then El Alto is more like No Country For Old Men – brutal, unforgiving and blessed with a people possessed with a stark civic pride. El Alto has needed a football club since its foundation, and Always Ready has arrived to provide that ultimate outlet for civic pride.

The link between Always Ready and El Alto becomes even clearer when I chat with fans during halftime. Ramiro and Ruben, two best friends dressed head to toe in Always Ready merchandise, describe the team as ‘an icon that symbolizes the unity of families in El Alto – it brings together families, friends, and even reunites people that haven’t seen each other for a long time.’ Mauricio ‘Chipi’ Caballero, a well-known sports journalist, describes football as ‘the biggest social movement in Bolivia.’ Ultimately, Always Ready is El Alto and El Alto is Always Ready. ‘People from El Alto need to support Always Ready because we need to be represented as a city nationally,’ Ramiro says with a chuckle.

The desire for Always Ready to qualify for a CONMEBOL (the South American football confederation) competition runs deep. Caballero, the sports journalist, even refers to it as an ‘expectation’ that the club have – quite an ambition for a club in their first year back in the top flight. It's important to note that this transformation from also-rans to genuine competitors has been quick and recent – Caballero notes that as recently as 2013 Always Ready were only getting an average attendance of no more than 500 people in their stadium in La Paz. It's not a transformation that has happened on its own, however; there has been a significant investment of time, money and nous into the club by the father-and-son pair of Fernando and Andres Costa. Fernando Costa is the owner and president, whilst Andres runs the day-to-day operations – even performing a popular stunt of kicking footballs into the crowd at half time. It was their decision to move into the government-built Villa Ingenio and their canny marketing that has made the connection between El Alto and Always Ready seem inevitable, even divinely ordained. Reading interviews given by the Costas, it is clear they are incredibly ambitious – their ultimate goal would be to surpass River, Boca et al. and win the Copa Libertadores. They also have ambitions to develop the often undeveloped domestic footballing infrastructure, working with the Bolivian Football Federation to improve conditions and also introduce a proper parallel women’s league.

Most of the fans I have spoken to are newcomers who tied their colours to Always Ready’s mast when they first moved to El Alto, or since qualification to the Primera Liga this term. Particularly in La Paz, when the team fell from the top flight many fans moved to Bolívar or the Strongest and haven’t returned. However, there are a scattered few diehards who stuck with the club through thick and thin. Grover Murillo is one such member of the old guard. His perspective is interesting, stressing the importance of old-school fans as a tie to the club’s history. Many of the new fans, he tells me through email, will have joined so recently that they might as well assume that Always Ready was born in El Alto. It seems really important to him that Always Ready don’t forget about their past, and keep a link to the rich history of the club through the fans that have seen it all.

Back at the stadium, a teenage boy next to me gestures for me to stand up. The band pick up their instruments and the fans start jumping up and down as the second half begins. The Red Fury knows that Always Ready’s success rides on the back of the fanatics’ joyous cacophony. The ball pings about on the right flank from floppy-haired fan favourite Eduardo Puña to gnarling, lion-like striker Marcus Ovejero. Always Ready play a style of football based around the pass-and-move, knocking the ball into space before throwing themselves into the tackle. The players wear their passions on their sleeve, and Ovejero ends up being booked by the linesman for backchat after appealing for a foul. Despite playing on Bolivia’s only 4G pitch, the players aren’t afraid of sliding in, aren’t afraid of giving away fouls – they aren’t afraid of anything. And the fans love it, reacting eagerly to every challenge, every through-ball and defensive clearance. When Always Ready score their third goal – a tap in after a neat bit of ping-pong buildup play – the fans go absolutely crazy.  This is the chorus of the pop song, the happy ending of of a rom-com – the moment we’ve all been waiting for. One thing that's often forgotten about football – lost amidst the tactical analysis, the tribalism and the slide tackles – is its capacity to produce pure joy.

The fans keep on singing at full voice - backed by an ensemble of brass and drums played by a well-drilled band – la hinchada. The leader, Mauricio Salas, explains the ethos behind the band: ‘I’m always looking to give my best so others can give it too, supporting the team at every moment.’ The band are remarkably well drilled and, like the rest of the fans, contain people of all ages. Salas says that he cannot play in the band because he is too preoccupied with the organisation of it – sorting out flags, teaching the songs to newcomers, getting water for halftime. Standing next to la hinchada makes the spectacle blur between elite sport and a live music concert and makes me wonder how everyone can keep singing, dancing and cheering for 90 minutes in the fierce sunshine.

There is a belief that courses through the veins of everyone involved in Always Ready – the staff, the players, the fans. Spend a few sunny afternoons in the company of Los Millonarios and their faithful and you too start to believe. You’ll believe that a team in its first season in the top flight can challenge for a place in the Copa Libertadores. You’ll believe that a city that has only just begun hosting the side has been Always Ready’s spiritual home since the dawn of time. And you believe that it's these fanatics – the father-and-son drumming team, the 16-year-olds in bucket hats, the best friends draped head to toe in red and white – these fanatics are what will make Always Ready an institution to rival Bolívar down the hill, with Estadio Villa Ingenio their fortress atop the altiplano.

If there’s one word that sums up Always Ready, then and now, it’s this: youth. Named after the scout’s motto, founded by a group of schoolkids in 1933, based in a 35-year-old city, attended by joyously rowdy teenagers – it’s this that has provided the backbone for Always Ready, and it could be youth that holds the key to the club’s future – continuing to find new talent from across South America, and continuing to bring in young fans throughout the city.

Never stop singing when the other team scores.

Real Potosí eventually pull a goal back, but the Red Fury shows no signs of quietening down. They’ve learned from ultras all across the world that one paramount rule: never stop singing when the other team scores. 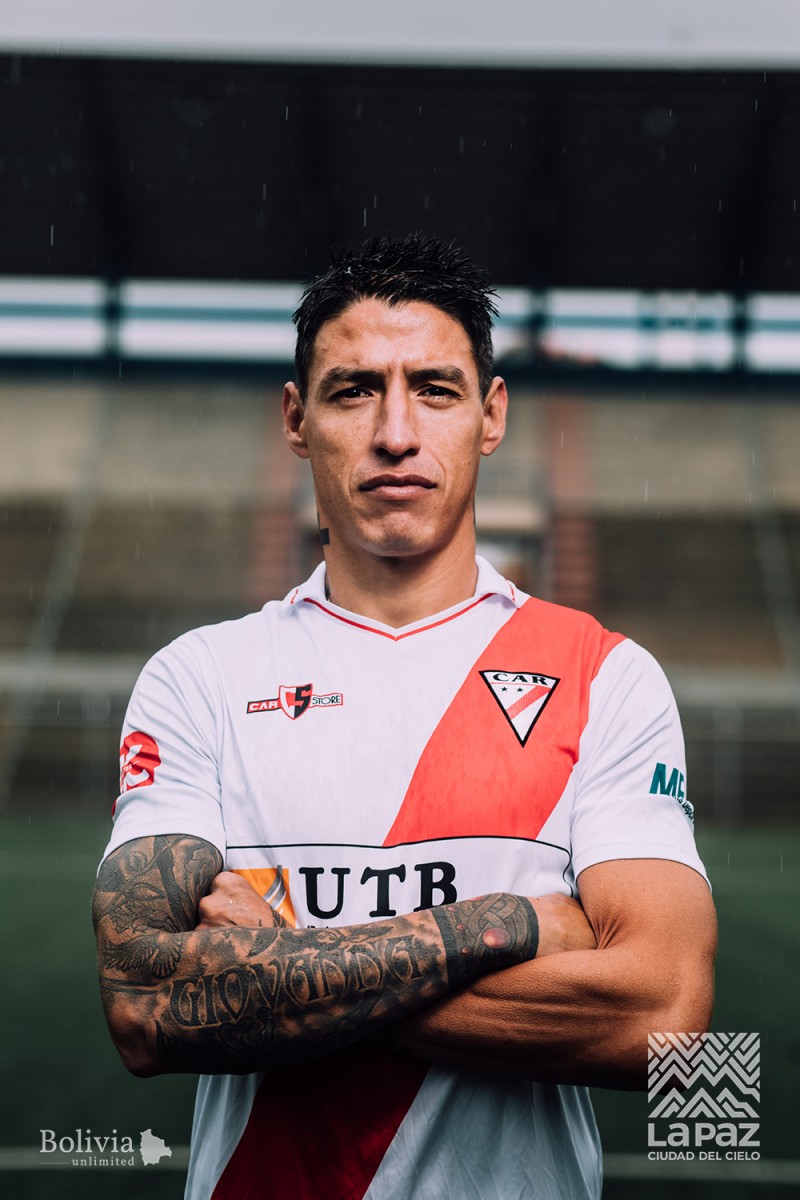