Within a country largely unfamiliar with the world of wine, success for the Bolivian wine industry may depend on reinventing Bolivian culture itself.

‘I don’t care for wine, but many people who come here do’. Fresh off the airplane, and flush with an eager journalistic naiveté to discover the people’s love for wine in Bolivia’s wine country, my taxi driver’s words were perhaps the best introduction I could have asked for. Enigmatic at best, though decidedly apathetic, Bolivia’s relationship to wine reflects both the traditional mentality of a nation, and the ambitious and determined will to change it.

I’ll be the first to say that I am no wine expert, but perhaps this is what makes me qualified to explore Bolivia’s wine industry. For most Bolivians, an appreciation or understanding of wine is rare. So, like most Bolivian tourists who venture to Tarija and el Valle de la Concepción in the heart of Bolivian wine country, I did so with limited knowledge of the complexities of the craft, in part gained by living in the winemaking Sonoma Valley in California.

Bolivia has some of the highest wine-growing regions in the world, between 1.600 and 3.000 metres above sea level. The popular Bolivian wine branding slogan ‘Vinos de Altura’, highlights this distinction. According to the winery representatives I spoke with, the altitude gives Bolivian wine characteristics unique to the country.

Cristian Villamor, owner and manager of a boutique winery called Tierra Roja, explains: ‘Due to closer proximity to the sun, the plants behave differently; they take on different characteristics. There is a higher concentration of tastes and aromas. A recent study even showed that wine made at altitude has higher concentrations of resveratrol, an antioxidant with well-established health benefits’.

The Spanish conquistadores and Jesuit monks who produced wine in Bolivia in the late sixteenth century certainly didn’t have its health benefits in mind; however, the pressures of modern market-based production make such knowledge highly valuable, if one has the savvy to highlight it for marketing purposes.

Until relatively recently, the Bolivian wine industry didn’t bother to market itself internationally, and exports of wine abroad along with tourism to its wine country were untapped economic arenas. New varietals, though, were introduced a few decades ago by pioneering viticulturists, and an era of experimentation and adaptation began, initiating a significant turning point for the industry.

‘The 1970s marked the beginning of industrial wine production in Bolivia’, explains Mauricio Hoyos, commercial manager at the Aranjuez winery. ‘A bigger perspective, that of commercialization, began to take hold and has expanded every year since’.

Today, massive billboards adorn the walls surrounding the airport’s baggage conveyor belts, beckoning newly transplanted travelers to enjoy a glass of Bolivia’s finest. However, such flashy display of tourist propaganda was not always Tarija’s forte. In fact, many tarijeños clearly remember a time not so long ago when wine didn’t provide tourists with a destination in southern Bolivia.

‘I’ve lived in el Valle my whole life’, recounts a different taxi driver as we bounce along the dirt road to La Concepción vineyard. ‘When I was a kid there were almost no tourists here for the wine. But every year the numbers have grown’.

Today, Tarija’s bevy of daily ‘Wine Route’ tours, which take tourists to various wineries for tastings and viticulture education, demonstrate the wine destination the region has become. While there is still ample room for growth (in 2010, Bolivia ranked just forty-seventh in wine production by country), the fact that Tarija is a wine destination at all in Bolivia is somewhat remarkable given the formidable cultural obstacles to such progress.

At one of the first wineries to receive tourists (starting back in 1975), Bodegas y Viñedos La Concepción, tourism manager Fabiola Mejíz tells me of the early history of the industry, ‘It was difficult to enter into the Bolivian market because the people didn’t have that culture. In the past, wine was mostly thought of as something to get drunk with, which made it difficult to introduce a wine culture where wine is considered more for special occasions, or to pair with the food you are having for dinner’.

Bolivians consume very little wine, just over a litre of wine per person per year, a paltry drop on the palate compared to the fifty-four litres that a French citizen will consume on average. And yet, the daunting task of creating a tourism industry for wine in Bolivia was perhaps the most straightforward task in the development of its wine culture. The peculiarities of the Bolivian mindset may have been, and continue to be, the most stubborn component preventing more rapid growth of a wine culture in Tarija, and among the people of Bolivia.

‘A Bolivian idiosyncrasy is to always value foreign products the national ones‘, says Franz Molina, commercial manager and oenologist at Bodegas Kuhlman, another winery in Tarija. ‘It’s something cultural—many Bolivians tend to think what is foreign is better’.

The task of the Bolivian wine industry, then, involves developing a sophisticated and successful wine culture within a national culture that has historically underappreciated the role of Bolivian wine in daily life. To create such a shift in cultural mentality has proven understandably difficult.

‘Sure, the market is stable, but it does not show a strong growth like it does among other products’, laments Molina. From 2007 to 2010, Bolivia’s wine production experienced little increase in the amount of annual litres produced. Even though the industry has been trying to create something authentically Bolivian—a Bolivian experience and a Bolivian product—growth in the Bolivian market remains stubbornly slow.

To add one more element to this roadblock, Mejíz tells me, ‘Another difficulty in creating an authentic wine culture is simply the economic aspect of it. Much more often than not, people in Bolivia will opt for the cheapest wine rather than a more expensive, higher-quality variety.’

And this economic hesitance isn’t limited to just the general populace. According to Mejíz, the Bolivian government has also been reluctant to provide much in the way of comprehensive incentives, infrastructure, or support in tourism marketing to help develop the wine industry nationally or internationally. 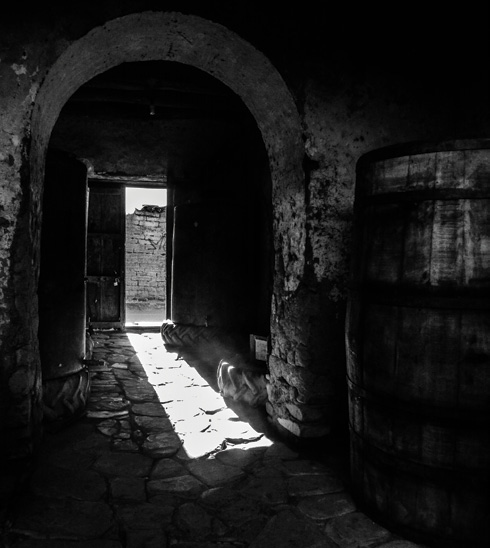 As my taxi nears La Concepción, the road somehow reaches a new level of bumpiness, and my driver adds, ‘If the government would take more notice of wine tourism, they would support el Valle more—for example, by paving the roads. This would help support the local economy and quality of life.’

But as my time in Tarija came to a close, I marveled at the level of development that wine tourism does seem to possess in the area. While it appears the progress hasn’t been easy, it certainly has been made, and ambitious groundwork for future innovation continues to be put in place.

Recently, in partnership with a Dutch export development agency, a group of Bolivian wineries joined together to strategically map out a plan to improve and increase wine exports from the country. Called ‘Wines of Bolivia’, this coalition has established a range of objectives for the future, including a PR campaign to establish the image of Bolivia as a producer of wines and to provide logistic support and assistance in the international market.

Of course, as the industry looks to the future, the number of wineries and level of production is still nowhere near close to the neighbouring wine giants Argentina and Chile. But while Bolivia may never have the land mass or resources to compete with the big players in international markets, it has experienced a healthy 10 percent industry growth as of late, and it exports to countries as distant as Mexico, Switzerland, and Spain.

According to Molina, part of this success is quite simple. In talking about his company’s champagne line, ‘It starts with quality—we have to make sure the quality is good. Nobody believes that Bolivia makes champagne, but when they try it, they think it is from somewhere else. They are impressed with the taste, and when they are told it is Bolivian, they are astonished’.

Some of Bolivia’s wines have also won recognition in international competitions in a variety of categories. If anything can revert a cultural inferiority complex, it is such esteemed recognition by one’s peers in the industry. And yet, a more validating measure, and one certainly more enduring, must be brought about from within the country itself. ‘Above all else, we want the loyalty of the Bolivian consumer’, emphasizes Mejíz. And perhaps this will ultimately be the strongest catalyst in shifting the ‘idiosyncrasies’ of the Bolivian mindset and accelerating the growth of Bolivia’s wine industry.

In a cloud of dust my car skids to a stop in front of the office at the vineyard of La Concepción and my taxista tells me, ‘The people of el Valle feel the wine culture is very good for the town. Almost all the families here work in the wine industry in some way. Our quality of life is much better because of this, and this can be true nationally as well—if more people came to know the wine’.

Yes, if only people came to know the wine. This is the alpha and the omega for an industry that must court a nation with a product and a culture that is at once alien yet truly, authentically Bolivian.

And remarkably, as that ravenous gulp of Cabernet is steadily transformed into an educated gaze, sniff, and taste, a drink culture that was once wholly and completely foreign is reshaping what is Bolivian in every sense of the word, every small sip of the way.