All Together for Bolivia 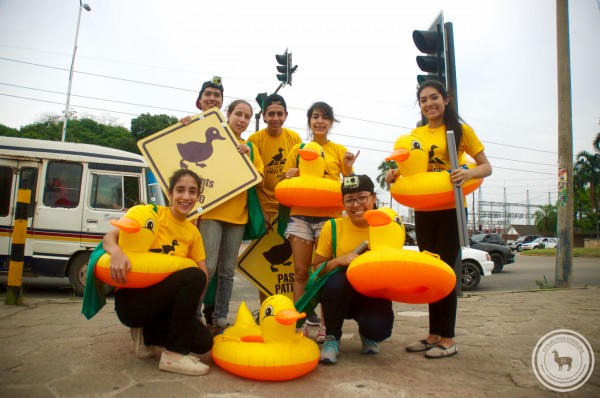 We've all struggled in the chaos of the cities of Bolivia. We’ve seen garbage in the streets, old buses belching smoke, cars ignoring red lights and honking for seemingly no reason. It seems an impossible task to change things for the better here, but some people have hope.

Revolución Jigote is a citizen-training program aiming to promote more organized street planning, public education, and protection for the environment. It’s the brainchild of CEDURE, a Santa Cruz–based nonprofit specializing in urban and human development. In Bolivia, jigote is a dish of stewed meat, but this movement doesn’t focus on food: it’s a set of values and attitudes that its authors hope will improve Bolivia’s often chaotic cities.

José Antonio Prado, Revolución Jigote’s director, says the program ‘analyzes how social marketing can combine with Santa Cruz´s idiosyncrasies to make civic education a theory that works locally.’ In other words, Revolución Jigote is trying to leverage today’s media to inform Bolivians, making them a better, more civic-minded populace. The group comprises about a thousand registered volunteers in total, plus a staff of 20.

‘Santa Cruz severely punishes those who do things right,’ José Antonio says. ‘For example, if you respect one traffic signal or the markings on the street, you feel like a burro for following rules. Therefore, doing the right thing becomes a heroic act. And this makes people feel they are doing things wrong when they are not.’

The philosophy of Revolución Jigote is espoused in the project’s manual: ‘Everyone has a mojigote [negative civil behaviour] inside, which manifests itself when we are not alert, and it acts when we stop thinking about others. The challenge is to control our mojigote from inside, little by little, until it disappears.’ The manual lists 200 types of socially unacceptable behaviours in 60 categories, including environment and health, urban mobility, space and public property, and democracy and governance.

José Antonio says Revolución Jigote is intended to nudge people into making positive change from the inside out. And he thinks the program is helping many people in Santa Cruz – professionals, retired ladies, and students alike – be more friendly, hospitable, and kind, both in relation to one another and to the environment.

The principles that Revolución Jigote promotes are applicable to any field and any location, but José Antonio believes they have created a movement specific to the cruceño context. ‘We created the idea, but the authorities have to continue our work,’ he says. ‘Sometimes there is a very big disparity between political and civil institutions.’

Meanwhile in La Paz, Aire Limpio [Clean Air], a project by the private foundation Swisscontact with funding from the Swiss Agency for Development and Cooperation, presented its Bolivian street design manual at the city’s annual book fair in September. The manual is colorful, graphic, and technical, a detailed study of the state of the streets and avenues of different cities in Bolivia, with a particular focus on La Paz. The stated mission of the book is to improve Bolivians’ health by reducing air pollution caused by motor vehicles and improving urban mobility.

‘You don’t always need giant structures or to be complicated. Sometimes you just need to optimize and simplify.’

Peter Hotz, an expert on urban mobility who has worked on transportation matters throughout Bolivia, says that it is possible to make radical changes in the streets and avenues of the city. For example, alternative transport methods, such as cycling, can help improve the environment. There are also design solutions too: ‘You don’t always need giant structures or to be complicated,’ Holt explains. ‘Sometimes you just need to optimize and simplify. For example, pasarelas  are not the best solutions to reduce the number of [people getting hit by cars]. They usually cost a lot of money, and the investment is often not justified because they are not used often. Instead, you can use simply use speed bumps. . . [and vehicle speed] is reduced.’

The Aire Limpio manual lists various areas in which Bolivian cities can improve – for example, narrow sidewalks can be widened and repaired, infrastructure can be built for cycling or for bus lanes, more parking spaces can be provided – and the project also holds training sessions, in which participants discuss the benefits of mass transportation in curbing air pollution. Real-world evidence is given, so that every citizen, no matter how they move around a city – by car, by bus, by foot – can do so in a way that will improve the city for everyone.

Bolivia, with its unique geography and population distribution, won’t find a one-size-fits-all solution to the growing pains it is experiencing. Its two megalopolises, La Paz–El Alto and Santa Cruz, are growing quickly, gathering more and more people in their urban dynamism. But the future looks promising, especially with help from far-sighted planners who are looking to improve the lives of all Bolivians.