All eyes on October 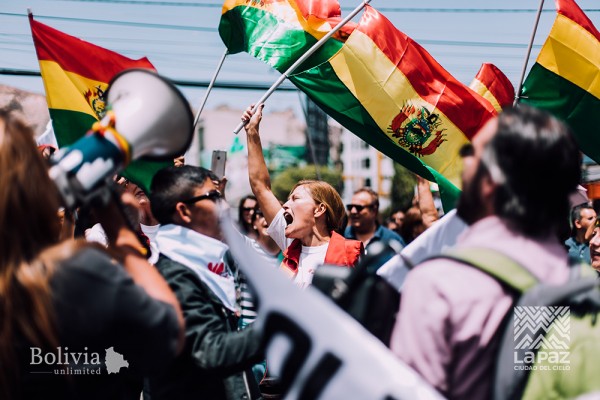 With the general election due to take place in late October, this year could prove to be pivotal for Bolivian politics. Evo Morales and his Movement to Socialism (MAS) party, who have led Bolivia for over 13 years, are seeking a fourth consecutive term. Although Morales lost a referendum in 2016 to sidestep the Constitution and allow him to run for president again, a controversial decision by the country’s Supreme Court ruled in his favour.

Under Morales’s leadership, the Bolivian economy has grown at an impressive 4.9 percent, driven by high commodity prices which have enabled Bolivia’s GDP to more than double in just over a decade. Morales’s effort to redistribute this income has also seen extreme poverty fall by half. Furthermore, MAS’s social policies have empowered and ensured representation for previously marginalised, predominantly indigenous sections of the population.

However, the failure of MAS to diversify Bolivia’s economy and its seeming disregard for democratic principles have put the party in a precarious position. Unsustainably high hydrocarbon and metal ore prices have so far excused a dependence on an extractivist model, but a lack of industrialisation could jeopardise Bolivia’s economic future. Morales’s government has also so far failed to address the shockingly high rate of violence against women and claims of rampant corruption across the country. The government’s dismissal of the 2016 referendum, coupled with its almost complete control of electoral organisations, has set a dangerous precedent for the future of democracy in Bolivia.

What is for certain is that there is a real opportunity and significant momentum to put an end to Morales’s grip on power. What remains very much in doubt, though, is whether any one candidate or party can capitalise on such an opportunity. Since assuming power, President Morales has faced a divided and hitherto ineffective opposition. Now, with a total of nine names on the ballot and a host of familiar faces amongst the candidates, the anti-Morales side is still fractured. Unlike in the past, though, the president’s slide in popular opinion might portend that this election will prove different. 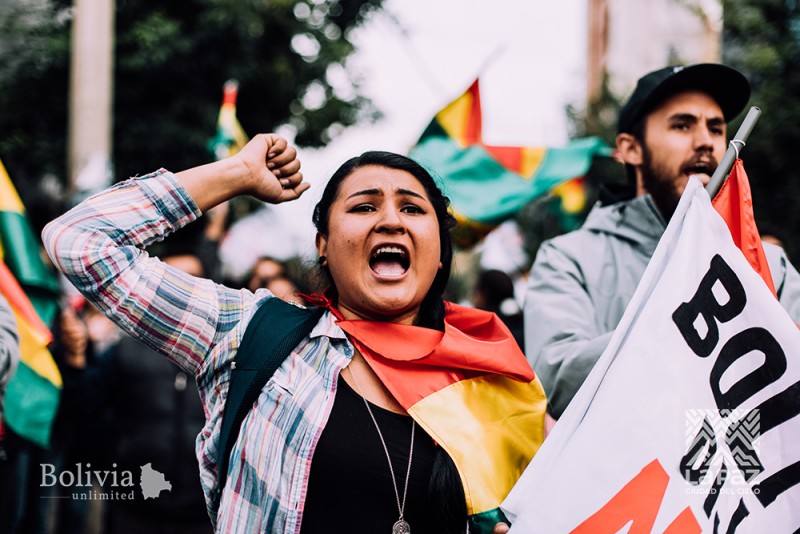 The list of challengers to the incumbent president includes the vastly experienced, former presidents; Carlos Mesa, for Civic Community (CC) and Jaime Paz Zamora of the Christian Democratic Party (PDC), the current governor of the La Paz department, Felix Patzi, of the newly-established Third System Movement (MTS), and Virginio Lema for the historically left-wing National Revolutionary Movement (MNR). Candidates further to the right include Santa Cruz native and current senator Oscar Ortiz for Bolivia Says No (BDN) and Victor Hugo Cárdenas of Solidarity Civic Unity (UCS). Ruth Nina for National Action Party of Bolivia (PAN-BOL) and Israel Rodriguez of the Front for Victory (FPV) have also declared their candidacy.

The most likely challenge to Evo Morales’s position will come from ex-president Carlos Mesa. In 2002 Mesa served as vice president under then-president Gonzalo ‘Goni’ Sánchez de Loza and subsequently assumed power when the latter fled the country in 2003. Mesa’s time as president proved to be ill-fated, however, and he resigned in 2005 following widespread demonstrations and violence. The well-known historian and TV journalist is now the candidate for the Civic Community party. This centre-left alliance unites Mesa’s former party, the Left Revolutionary Front, with the Sovereignty and Freedom Party, led by the current mayor of La Paz, Luis Revilla.

An advocate of free-market economics and critic of Morales’s protectionist and state-interventionist policies, Mesa has supported opening Bolivia’s economy to international markets and foreign investment. Unsurprisingly, Mesa depends on the urban-based, highly educated circles of Bolivian society for support. Since declaring his candidacy, he has surrounded himself with upper-class elites to further his political aims. According to Bolivian journalist and political commentator Fernando Molina, Mesa may struggle to convince poorer and less well-educated Bolivians to vote for him. There’s an ethno-cultural tendency to reject blancos in Bolivia, Molina says, due to a history of exploitation, and Mesa’s association with Bolivia’s elite makes support for him much less certain.

Molina also says that Oscar Ortiz could play a role in undermining Mesa’s bid for the presidency. The former president of the Senate and current senator for Santa Cruz is the candidate for Bolivia Says No (BDN), a right-wing conservative alliance between the National Unity and the Social Democratic parties. BDN’s main support is likely to come from the east of the country, in particular from wealthier landowners around Santa Cruz who favour BDN’s proposition to federalise Bolivia. Like Mesa, Ortiz is also a vocal advocate of a more capitalist economic model based on free-market principles.

At the time of writing, most polls have both Morales and Mesa tied with around 30 percent of the vote each. Ortiz is seen as the next favourite, currently slated to receive between 6-10 percent of the vote. For the two opposition candidates, much will depend on their respective campaigns. For Mesa the key will be convincing working-class and indigenous voters to challenge MAS’s recent dominance. For Ortiz, it will be a case of how far he can erode Mesa’s popularity.

On the far-right of the political spectrum in Bolivia is the ever-divisive candidate for UCS, Victor Hugo Cárdenas. The 68-year-old Aymara politician became the first indigenous vice president, in 1993, during the first presidency of the now-loathed Goni. Cárdenas was also an important part of the neoliberal project in Bolivia of the 1990s and early 2000s, and he’s retained connections with international and US institutions as well as with Brazil’s controversial leader, Jair Bolsonaro.

Along with his running mate and former pastor, Humberto Peinado, Cárdenas does not seem afraid to divide opinion. In March this year, Cardenas chose International Women’s Day to launch a somewhat controversial campaign proposal: to open the debate on women carrying weapons as a solution to gender violence. Peinado also openly opposes abortion and ‘gender ideology.’ Come election day, Cárdenas’s appeal may well be limited to predominantly Catholic groups and right-wing supporters.

Felix Patzi, former minister for education and current governor of La Paz, is another interesting candidate. An erstwhile member of MAS, the Aymara native is representing MTS, a new party pushing to represent the rights of indigenous groups. The party’s campaign is based around a rather generalised criticism of traditional left- and right-wing politics and advocacy of a revolutionary new political system.

Patzi says the MTS is a centrist party that, supposedly, ‘doesn’t mix any elements of the left or the right.’ He proposes to combat Bolivia’s epidemic of violence against women by developing strong family norms, and suggests that ‘communal businesses’ – arranged without hierarchy or individual ownership – could usher in a restructuring of the Bolivian economy. However, Patzi’s very traditional social ideas and indigenous ideology seem highly unlikely to resonate with much of the population.

For the majority of the challengers to the presidency, they can only realistically hope to win at least 3 percent in the general election, which would protect their respective party’s legal status. 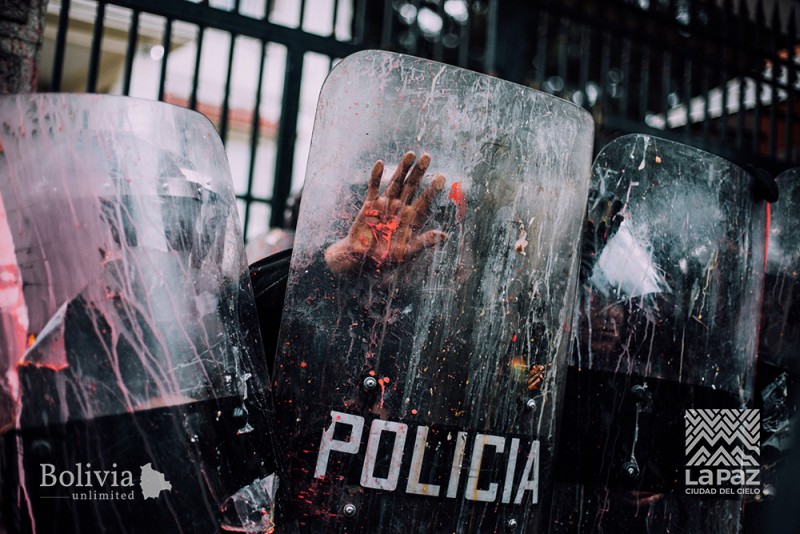 Despite real dissatisfaction with the current regime, the opposition remains perhaps critically divided. Those in the running to become president in October include two ex-presidents, a former vice president, the current governor of La Paz and a former president of the Senate. Almost all of the opposition candidates have claimed that a defense of the people’s rights in light of the 2016 referendum to be a priority. Yet all of them are standing for a separate political party.

At this stage, it appears that this reticence to form an alliance could undermine the challenge to President Evo Morales. Molina suggests that the success of Mesa and Ortiz appear to be mutually exclusive, and Mesa’s refusal to ally himself with the cruceño ‘could cost him the election.’ BDN’s negative campaign against Mesa, in which it has accused the ex-president of profiting handsomely from Bolivia’s legal fight for access to the Pacific, looks set to play into Morales’s hands.

First-time candidate Israel Rodriguez insists that despite his lack of political experience, he is the only candidate that can offer something different. When asked what his party can realistically hope to achieve, Rodriguez responded that their hope is to form an alliance with other candidates against Morales but, crucially, not with someone such as Mesa or Ortiz as leader. Instead, Rodriguez proposed that it should be ‘someone young and clean, and with beliefs and strong values, with new ideas… and that is ourselves.’

MNR candidate Virginio Lema is also basing his campaign on offering a fresh perspective. Irrespective of his party’s 60-year history, Lema is counting on the appeal that he is not a traditional politician and the only candidate who can bring change to Bolivia. You get the idea.

In addition, aside from MAS, the political left in Bolivia remains underrepresented. In fact, MAS is the only effective party which purports to offer a left-wing or socialist government. As well as being closely tied to the middle and upper classes, the majority of political parties belong to the political centre or further to the right. And then there is Patzi’s MTS, which doesn’t belong on any political spectrum. Morales’s simple, ostensibly left-wing rhetoric has so far been very successful in appealing to many Bolivians who have long lacked a political voice.

Waldo Albarracin, a very vocal critic of the current government, was unequivocal in his opprobrium of the current opposition candidates. The former human-rights lawyer is the current director at La Paz’s main public university, UMSA, and a highly influential political and social figure. In Albarracin’s view, ‘the same shortcomings of the government can be seen in the opposition.’ More specifically, Albarracin referred to a lack of transparency and, notably, each candidate’s own aspiration to lead the country. Ivan Rodriguez Montenegro, a former general secretary of the Bolivian railway workers union, is also sceptical. Highlighting an inability to unite behind a common front, Rodriguez attributed this to the self-interest of current politicians. ‘Since the era of the dictators, everyone has been looking out for their own interests,’ Rodriguez argued.

While it is possible that the political outlook will change considerably before October, such a divided opposition is welcome news to Evo Morales.

The opposition is certainly facing an uphill battle in their bid to gain the presidency, even more so considering the unlikelihood of completely fair elections. On this point, Albarracin is characteristically critical, declaring that for the government, ‘playing fair is suicide.’ Molina is slightly less cynical but still pessimistic, likening the elections to playing football on a sloped pitch. Thanks to its comparatively vast resources and current dominance of supposedly autonomous electoral institutions, MAS has a clear albeit unfair advantage.

Whatever the outcome, what does appear likely in the aftermath of this year’s elections is more extreme polarisation and a sharp rise in tensions. If Mesa wins, he will almost certainly face strong resistance from the incredibly influential and heavily pro-MAS Chapare region, important for its coca production. If Morales retains power and democracy in Bolivia continues to be worn away by MAS’s political machinations, public outcry and mass mobilisations would seem a foregone conclusion.

Whatever the outcome, with a dearth of fresh faces and ideas on this year’s ballot paper the decision on October 20 could well be a case of el mal menor – the lesser evil.