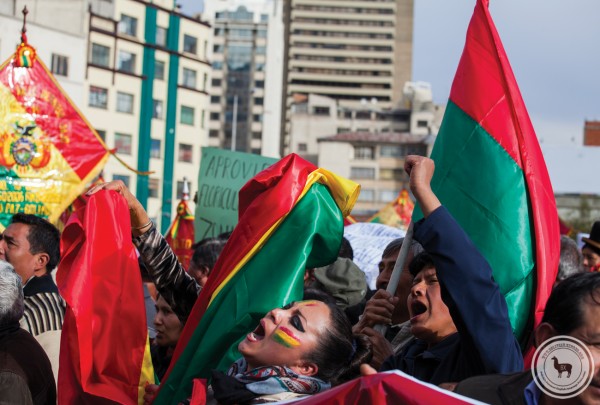 The drought has brought out the ugly and the good in La Paz’s affected areas.

Manuel Morales, a resident of the San Antonio neighborhood in eastern La Paz, has been collecting rainwater to flush the toilet and do the laundry, using every drop he can gather from the sky to complete household tasks. Water is rationed in his neighbourhood at the moment, and his house receives it for only an hour a day, which he uses for cooking and consumption. ‘I never imagined it would come to this,’ he exclaims.

La Paz is currently facing the worst drought it has seen in over 25 years. Climate change and deforestation are blamed, but accusations of mismanagement by the public water company EPSAS have also been leveled. Nonetheless, the three reservoirs that provide La Paz and El Alto with water are almost dry.

Protests have swept the city since this latest water crisis, and Manuel thinks they will continue to grow. Demonstrations over access to water are nothing new to Bolivia: protests in Cochabamba in 1999–2000 forced the US company Bechtel to abandon its water-distribution concession, and in 2005, other protests in El Alto assured a similar fate for the French multinational Suez. If things do not improve, the residents of La Paz and El Alto have their response well-rehearsed.

There’s an awakening of solidarity in people that transcends class distinctions.

In mid-November, dependable sources of drinking water disappeared overnight in much the city. Augusto San Miguel, a young law student who lives in the exclusive Aranjuez neighbourhood in the city’s far south, was shocked when he turned on the tap and nothing came out. He had always taken his water supply for granted. Now city residents like him must come to terms with the daily reality of living with limited water. The periphery and the south of the city are the worst affected, but the shortage has hit both the poor and the rich alike, yielding interesting consequences.

Some affected residents have been creative in their search for and conservation of water. After the initial shock of losing access to her regular water supply, Zona Sur resident Julia Chinchero organised with her neighbours. Together, they searched for alternative water sources and escorted water trucks to their neighbourhood (other residents have been known to divert trucks from their assigned areas). Eventually, the water returned, but, in a sign of poor planning, water trucks are still being sent to Chinchero’s neighbourhood instead of areas of the city where the water supply is still interrupted.

This unequal distribution of the limited water supply provided by trucks forces paceños to be vigilant. Gloria Quino, from the northern “Cervecería” neighbourhood, says that the water shortage has caused confrontations among neighbours. Water trucks have been commandeered by the unscrupulous, forcing  Gloria to guard the tankers as they make their way from the Hospital Obredor district.

Chinchero has also seen the water-rationing system break down. Although there is a group of neighbors who oversee the provision of water in her neighbourhood, most people on foot can only carry a couple of litres; those with cars can receive many gallons more. And some, like Augusto´s family, struggle to collect the water which is distributed miles from their homes. Additionally, water-truck schedules are not always convenient.

La Paz’s city centre is known for, among other things, the continual demonstrations that take place on its streets. There’s always a different demand, and always the same method: marches down the boulevards, with placards waving and the shouting of discontent. It’s a way to demand one’s rights and to hold the powerful accountable. And the people from El Alto are particularly renowned for using this strategy to get their voices heard.

In the past, these demonstrations were usually staged by people from the poorer districts of the city. But with the water shortages plaguing all sectors of society, the relatively privileged residents of Zona Sur and other affluent areas are also taking their concerns to the streets. They’ve been pushed into a scenario where their need is provoking a political awakening. Augusto reflected on the changes triggered by the water shortage: neighbours are getting into disputes with each other over access to water, which some parties are trying to exploit to make a political point, but there’s also an awakening of solidarity in people that transcends class distinctions. A recent march in Plaza San Francisco illustrated this, when a group of protesters from Zona Sur demonstrated next to a group from El Alto. Some of the Zona Sur protesters commented on the alteños’ better organisation and suggested that they emulate the more experienced group.

‘I never imagined it would come to this.’
- Manuel Morales

The current water crisis in La Paz and El Alto is building bridges between social classes, and hopefully raising environmental awareness. This resource shortage comes as an intensive course on effective water management for all, and as a severe political sting for some. Manuel recognises that some people were thoughtless about water, but this is changing through their experiences of the crisis. His family has learned to recycle the water they use to wash their faces and brush their teeth, using it to flush the toilet.

Given that this crisis is in a large part caused by changing environmental factors, these productive responses can only be helpful for the city of La Paz as a whole in the long run. In the wake of the crisis there has been a lot of finger-pointing and searching for someone to blame. Julia Chinchero believes this crisis was known about five years ago, and resents that nobody took action to prevent it earlier. Her concerns may be legitimate, and the government and the municipal water company must respond. But pointing the finger in the face of the daily struggles faced by most paceños because of this crisis is not particularly helpful on the ground. What is encouraging is that people are responding both by changing the way they view water and the way they use it in their daily routines, and educating themselves over what they – and the government – can do to prevent history repeating itself.