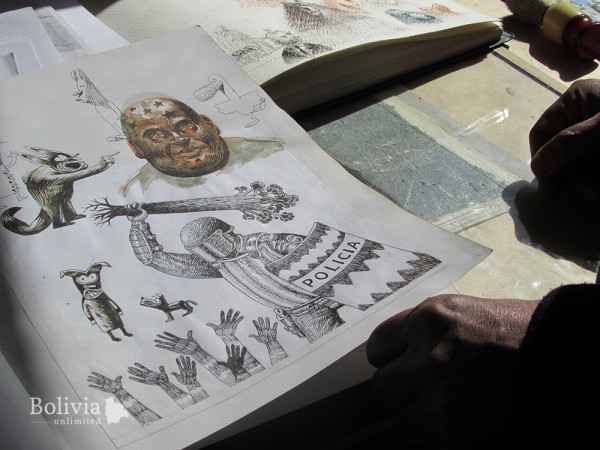 The talent of amalgamating art and politics

A spacious workshop with a large window overlooking the mountains, home to an array of paints, brushes, oils, pencils and hundreds of books, is also home to Alejandro Salazar, the Bolivian artist known as: Al-Azar. Salazar produces many forms of artworks; he doesn’t adhere to just one style or technique. He has put on gallery exhibitions, created flip books, and is a regular contributor to local Bolivian newspaper La Razón. His political caricatures have been the subject of great controversy over the years, particularly his infamous caricature depicting the disaster at the Carnival of Oruro in which five people died. The illustration titled ‘Welcome to the Carnival’, which features a band of skeletons observed by a crowd of cadavers, was deemed insensitive.

In response to critics, Al-Azar maintains: ‘If a subject interests me I’m not bothered if people protest, it’s what I’m interested in. There are matters that affect me, and if I feel like saying something about things I have witnessed, I draw to express myself. You comment on it in conversation, whereas I use art.’

His defiance in continuing to produce art that is relevant to him, regardless of public opinion, is admirable. Despite this, Salazar recognises that some matters necessitate a more sensitive approach. ‘You have to be careful in how you say things,’ he admits. ‘Generally, I try to create drawings that are much more subtle and that don’t cause such a strong reaction.’ According to Salazar, this way his art is more effective. ‘People don’t get angry and they accept the message,’ he explains.

Flicking through Salazar’s cuadernillo of recent work was like opening the pages to his mind. ‘An American once asked me if I was unwell after looking at my work,’ Salazar remembers. A sense of magical realism emanates from his workbook; the personification of animals and nature and the abstraction of the human form is prominent throughout.

‘What I struggle with is knowing what is true.’

Although primarily a source of humour, through oversimplification and exaggeration caricatures give their subject a new prominence, so much so that they can portray them in a different or potentially damaging light. Salazar’s piece of the current Bolivian president, Evo Morales, stood out in his workbook. Morales appears with his arms and legs merging into the chair on which he is sitting. For some the image could signify inactivity on the part of the government. Others might see it a symbol of the restraints that the president faces – bringing to life the idea of metaphorically having your hands tied. Regardless of how the drawing is interpreted, it has the potential to provoke a change in opinion. With little or no written description, caricatures reach audiences of all literacy levels. With the stroke of a pen, artists such as Al-Azar have the power to influence in a way that reasoned, written argument may be unable to. 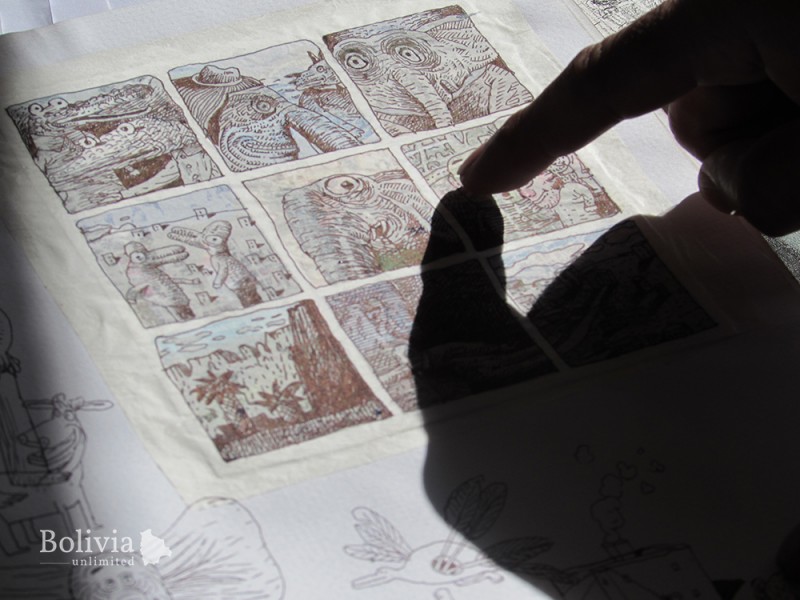 The purpose of Salazar’s work, however, isn’t to influence others, although he appreciates that it is a consequence of his drawings. His work is rather a form of expression. Salazar is a humble man, whose passion for art and creativity overshadows any desire for political power. ‘What I struggle with is knowing what is true,’ he asserts. ‘I see the same news via different platforms, and essentially the same piece of news is manipulated to say something different. That is the difficulty.’

A sense of magical realism emanates from his workbook; the personification of animals and nature and the abstraction of the human form is prominent throughout.

The conflict between what is portrayed in the media and the ‘truth’ is prevalent in Al-Azar’s work. The beauty of his art is that it provides an alternative perspective on life that isn’t readily available through standard news media. Amalgamating political opinions, humour and artistic design to produce striking pieces of art is a true talent, and one that ought to be cherished.