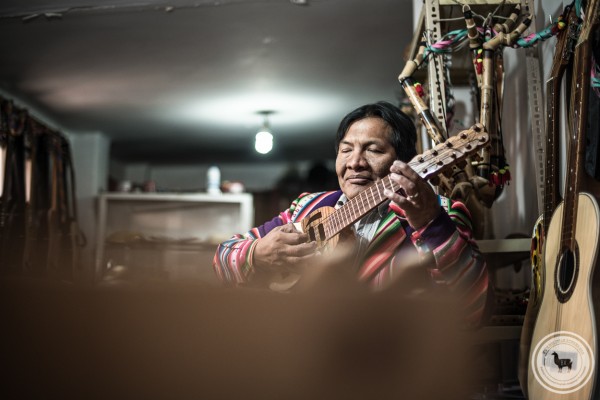 A lesson with the maestro

Agustín Alonso has been busy tending to his nest. A short walk up from Plaza San Francisco, family-made instruments line his workshop like banks of exquisite wooden wallflowers, while at the far end of the room sits a cluster of miniature furniture. Before entering, I perch in the courtyard below and listen to intricate musical phrases furiously strummed by this charango virtuoso. The song eases down to a harmonious end. It’s time for my first lesson.

Having tried and failed to graduate beyond three chords during my teenage foray into ukulele-playing, I pity Alonso; he’s got a tall order on his hands. However, much to my surprise, the expertly crafted lesson plan – which systematically tackles traditional rhythms, a discombobulating spectrum of chords, and the chromatic scale, too – sees us cover more ground than anticipated.

Born in 1961 into a family of Cochabamba-based musicians, Alonso has been blind all his life. True to clichéd imagery, this maestro has that intangible, guru-like quality where he seems to see through his other senses. In intermittent moments of wizardry, he tells me that the charango we are playing is too small for me, that I am using the wrong fingers to strum it, and asks casually whether the sealed thermos flask placed momentarily on his counter is coffee brought for him.

Thick-set, with wide facial features and a middle-parting that wouldn’t look out of place in a ‘90s boy band, the most striking aspect of Alonso’s appearance is his right thumbnail. It is enormous. While his talon dwarfs most guitar plectrums, mine was gnawed feverishly down to the cuticle during a particularly tense game of monopoly the previous week. Alas, we have bigger fish to fry.

He tells me that he began to learn the charango at 15, 40 years ago. ‘I love it because it is in my blood,’ Alonso says of music. ‘My grandparents made and played charangos, so all my life I have been surrounded by them.’ What began a pastime became a career. ‘When I got older, educated, aware, I discovered artists and I decided, “I want to be like them”. I said to myself, “One day I will be great”. My life began in that moment.’

Alonso speaks with reverence about the great maestros, his idols – one in particular: ‘I found a lot of inspiration in the work of Ernesto Cavour’, a Bolivian charango legend 21 years Alonso’s senior. What he learnt from Cavour he then married to a central desire to bring community to his musicianship, and thus began teaching. ‘I said, “It’s wonderful that I play the charango but I want my friends to play with me”. So I taught one friend the charango, one the guitar, and another the quena.’

In moments of beautiful poetic reverence, Alonso refers to himself and his instrument as ‘we’, as ‘us’, as one. When I ask about his dreams, a question he professes to like because ‘a dream is not an occupation, a dream is something that you always hold close’, he expresses a will to share his music. ‘I have dreams of travelling, doing concerts and conferences of charango, speaking about my life; this is my world of dreams. I understand that many friends of mine go to play abroad because they earn money, but I don’t want simply to earn money, I want to spread the charango.’

This maestro has that intangible, guru-like quality where he seems to see through his other senses.

‘I invite all the youth to keep playing it,’ Alonso says, as he leans forward in his seat at the end of our lesson. ‘I ask the governments of my country, municipal, departmental, and central, to interest themselves more in the charango, to safeguard it, to spread and promote this instrument. We are the country of charango. We have to promote and defend that.’

When, if ever, this maestro hangs up his instrument, he does not want his legacy to be that of a ‘blind charanguista’. ‘People often ask me, “What is the charango for you? Is it your guide?” No. I guide the charango, my heart lives inside its body and leaves it in pure sound. The charango is the instrument that allows me to share what I have in my soul: the message of love, of care, of hope, sometimes even sadness.’ Alonso is philosophical about his blindness: ‘It is a problem, not an insurmountable obstacle. It is a problem and every problem has a solution. The eyes are not what play. You play with your ears, your hands, with you hearing, your touch – I am illuminated by the melody, the music, and my passion for both.’