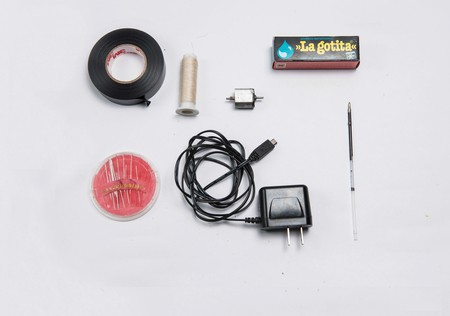 Finn O’Neill meets a young inventor, a tattoo artist, and some locals with body art to understand the past, present and future of ink in Bolivia.

Olmer Flores Pinedo is a 14-year-old alteño kid, trying to keep himself busy like so many others, yet he is anything but ordinary. I first met Olmer during a chance visit to El Alto market. Walking into a used clothes shop I noticed a skull tattoo on the arm of a boy who I later learned was the owner’s nephew. I approached him to learn a little bit about it and was astonished to learn that he had made it himself, with a tattoo machine that he had constructed. At lunch the next day, Olmer brought his tattoo machine to show me. He assembled it in front of me out of motor from a DVD player, a phone charger, a pen, a lighter, a needle, thread, pliers and a knife. The end product? A machine capable of producing a tattoo of high quality, arguably of better quality than some of the tattoos I had seen on the streets of La Paz.

Despite his machine only costing around 35 bolivianos to assemble, the Chinese ink which he requires to make tattoos costs around 250 bolivianos. For this reason, Olmer can’t do tattoos on other people, although he explained that his friends had asked him about the possibility in the past. He does, however, share a tattoo design on his arm with a group of his friends who are in a band together. Olmer was quick to note, though, that he was not part of a pandilla, but a music group. It is his dream to have his own tattoo parlour when he is older.

Perhaps Olmer will one day become someone like Jhony Jaramillo, a Colombian artist who works at Pepe’s Tattoo in La Paz. Jhony explained the allure of tattoos: ‘For me, it's not just marking your skin to look better or attract people's attention, it goes beyond this. As an artist I can say that it’s more a way of showing your feelings or something that's happening at some important point in your life, or something that happened to you’.

Tattoos in La Paz are common not just with rebellious local youths but even among middle-aged bus drivers. For many, tattoos are a mark of having spent time in the army, where it is customary (though not compulsory) to get ink on the hand or wrist to represent one’s squadron or regiment. One slightly reluctant bus driver whom I spoke with had gotten a tattoo at the age of 20 whilst in the army. He was dismissive of his colleagues who did not have tattoos, calling them ‘maricas’—perhaps a joke or a subtle show of strength. Ironically, the other bus drivers mocked him for having a tattoo, not necessarily because they thought of him as a ‘marica’, but hinting at the idea that having a tattoo could be a sign of immaturity. Perceptions aside, Jhony’s words rang true: the tattoo on the man’s wrist marks a moment in his life—something which he will remember all of his life.

Another man I spoke with, Israel, also had a military tattoo which clearly marked his regiment and his year of service (1999) along with four other tattoos on his arms. I met him near a garage where he was hanging around and chatting to some mates who were taunting one of the younger mechanics for his neck tattoo. Unlike the older bus drivers, Israel was more than happy to talk to us about his tattoos. He explained that military tattoos are optional, something done by the ‘big boys’ in the army as a proof of their bravado and valour. Israel said that his tattoos had been done by a tattoo-artist friend, and they cost from 30 to 100 bolivianos—much cheaper than they would have cost in Europe or the United States, where the cheapest hourly rate is around £60 (more than 600 bolivianos). The prices of Israel’s tattoos are still cheap when compared to the professional parlours in La Paz, where you can pay upwards of 200 bolivianos per tattoo. Israel told me that he wanted more tattoos and was unconcerned with how people perceived him because of them.

Certainly, there is not a vast tattoo culture in Bolivia; tattoos are not nearly as common as they are in Europe or the United States. But as tattoo art is increasingly appreciated as an art form, opinions are shifting and with them the prevalence of ink. Like elsewhere, tattoos are often merely seen as an act of rebellion by young people. But in Bolivia they’re also emblematic of a long-lasting tradition carried out by military personnel to demonstrate their time in service and their personal strength. It is likely that here, instead of being subject of ridicule and condemnation by older generations, tattoos and tattoo art might gain appreciation. As Jhony Jaramillo puts it, they are ultimately symbols that mark important moments in people’s lives, a form of expression and, above all, works of art.