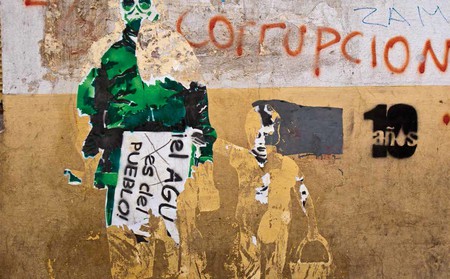 When water was worth fighting for

In the year 2000, the streets of Cochabamba were turned into a battleground, as the city’s residents protested against the privatisation of their water supply, and met with brutal opposition from armed police. This demonstration of people power and the shocking realisation that everything, even the water we drink, is for sale, has inspired a whole host of cultural references to the events in Cochabamba.

After a scene involving a dramatic plane crash and last-minute parachute opening, James Bond scrambles over a few rocks in the Bolivian desert and discovers a dam. And it is then that the spy suddenly realises what is going on, why the villain of Quantum of Solace is supporting a military coup by a character cast as the stereotypical Latin American dictator. ‘[He] isn’t after oil. He wants the water. He’s creating a drought.’

It sounds like your typical far-fetched action film plot. But there is more than a grain of truth in this whole story, and it is not just pure fiction that, as stated in the film, ‘there are people in this country spending half of their paycheck just to get clean water’. It only takes the smallest amount of research into the events of 2000 in Cochabamba to realise that water is and was a commodity like any other, to be bought, sold and traded.

Yet as Daniel, the troublemaking protester in 2010 film También la lluvia declares, ‘Sin agua no hay vida’ (‘without water, there is no life’). And perhaps this is why what happened in Cochabamba has captured the attention of the world, not to mention the dozens of films and documentaries made since that have drawn on this case of corporate greed and overwhelming people power to make statements about the state of our global society.

Jim Shultz, who is a long-term resident of Cochabamba and director of the Democracy Center, an organisation that uses investigative journalism and international campaigns to raise awareness about the impact of public decisions on our lives, has written about the water wars in his book We are Everywhere. He explains that the privatisation of the water was simply the latest in the series of instances of services and utilities being sold off to foreign corporations. Yet this time, there was one key difference: ‘Water was something essential to life… People knew that if they lost control of their water they lost control of their lives’.

The iconic slogan adopted by the protestors was straightforward and to the point: ‘¡El agua es nuestra, carajo!’ (‘The water is ours, damn it!’). For it wasn’t just that Bechtel had bought the right to supply Cochabamba’s water officially: as recounted in the chapter on the water wars in Benjamin Dangl’s The Price of Fire (AK Press, 2007); Water Law 2029, which allowed for the privatisation of water supplies, ‘also prohibited the function of alternative systems of water distribution… People were billed for everything from the water piped into their houses, to water collected in rain gutters, to the water in community wells’.

In a dramatic scene in También la lluvia, Daniel demands the crowd to ask themselves ‘what will they take next? The vapour from our breath? The sweat from our bodies’. An angry crowd of women confronts the workmen and their police escort, who have come to block off their well: ‘You take our lands, you take our wells. Are you even going to take the air from us?’. As Canadian author Maude Barlow, who has served as Senior Advisor on Water to the UN, describes in 2003 documentary The Corporation, ‘There are those that intend that one day everything will be owned by somebody… human rights, human services, essential services for life. Education, public health… water and air’.

This concept of ownership of basic resources was utterly alien to the cochabambinos, many of whom believed that water was a gift from the Pachamama: a precious commodity, certainly, but not one that could be bought and sold. And in the context of this belief, the statements by Bechtel and the World Bank that charging market prices for water discourages waste (a key policy in an area like Cochabamba which is prone to shortages) seems utterly ridiculous. As Elaine Bernard asks in The Corporation, ‘Why does [something] only become wealth when some entity puts a fence around it and declares it private property?’. In Quantum of Solace, we see that water can be as important and as profitable as oil or gold, once it is scarce enough. That might seem far-fetched or excessive, but the Cochabambinos’ willingness to put their lives on their lines for it is surely proof enough of its value.

For a brief period, Cochabamba became the focus of world attention, as this standoff between David and Goliath was played out amidst a growing realisation that the Bolivian government was far more interested in defending its investors than its own citizens. Oscar Olivera, one of the figureheads of the Cochabamba protests, says that ‘the only legitimate authority was the people… they made the decisions… we were able to taste democracy’. It may seem hyperbolic to talk of an affinity between corporations and the ‘regimented structures of fascist regimes’ as The Corporation does, but in a situation where the government declared martial law and sent in troops to fire on teenagers, it is hard to come to any other conclusion. And as Shultz says, many of those who went out onto the streets to protest were facing ‘people knew they were in a standoff with a guy who’d been Bolivia’s Pinochet… people were going out to the streets who’d had their brothers disappeared… people who had been tortured’. This was not just a case of a few people getting annoyed about paying a little more for a service.

In the words of Noam Chomsky, ‘Privatisation does not mean you take a public institution and give it to some nice person. It means you take a public institution and give it to an unaccohttp://www.bolivianexpress.org/refinery/blog/posts/newuntable tyranny’. When the World Bank pressured the Bolivian government to privatise its water supplies and Bechtel arrived in Cochabamba, this was exactly what happened: a multinational corporation prepared to make profits whilst the poorest residents of the city struggled to decide between paying their bills and buying food or clothes, or sending their children to schools. It is no wonder that the situation inspired such a dramatic reaction, in Bolivia and across the world.

The people of Cochabamba succeeded in throwing out their invaders, and as the Democracy Center found in a recent investigation, they are proud of having saved their water system, even if they do accept that it is still corrupt and fraught with problems. As Olivera says, they proved that ‘the power of the people cannot be underestimated’. And yet this one victory cannot stem the global tide of privatisation, and the exploitation that inevitably comes with it. As También la lluvia demonstrates, the indigenous people of South America were sold for profits and private interests more than 500 years ago. Bolivia is incredibly rich in natural resources, and yet somehow its people have never gained anything from the fabulous wealth that lies in their land: you only need look at Potosí, from whose Cerro Rico it is claimed the Spanish extracted enough silver to build a bridge back to Europe (and have some left to carry over it), a city that is now amongst the poorest in South America, populated by miners who work in abysmal conditions scraping at what little metal is left under the collapsing surface of the hill.

However, if the water wars prove anything, it is that ordinary citizens do have the power to take control of their lives. Shultz describes the events of 2000 in Cochabamba as ‘revolutionary’: people’s concept of politics, how they thought about who ran their lives, was irrevocably changed. No-one is saying that the current system is perfect, and Cochabamba’s water supply is as unreliable as ever. But the difference is one of attitude: the cochabambinos faced down a multinational corporation, an ex-dictator and the military, and proved their power. To themselves and to the world.

Key Events of the Water War

1967 – Washington-based Inter-American Development Bank grants a $14 million water development loan to Cochabamba. One of the requirements is the creation of SEMAPA (the Servicio Municipal de Agua Potable y Alcantarillado).
February 1996 – The World Bank offers an urgent $14 million loan to expand water service in Cochabamba, on the condition that SEMAPA is privatised.

June 1997 – It is decided that $600 million of foreign debt relief is also dependent on the privatisation of Cochabamba’s water.
September 1999 – Cochabamba’s water system is put up for private auction. One company comes forward: Aguas de Tunari, a subsidiary of San Francisco-based Bechtel. The 214-page contract signed with Bolivian officials hands over control of the city’s water for forty years, with an average guaranteed profit of 16% a year.

October 1999 – The Bolivian Parliament passes Law 2029 (Drinking Water and Sanitation), which allows for the privatisation of drinking water and sewage disposal services.
November 1999 – The Federation of Irrigators stages a one day blockade of the roads leading to and from Cochabamba, in protest against the water privatisation. They meet with Oscar Olivera, president of the Cochabamba Federation of Factory Workers, and together form the Coalition for the Defence of Water and Life (the Coordinadora).

11th January 2000 – In response to average rate increases of more than 50%, the Coordinadora launches a full blockade of the city.
4th February 2000 – A peaceful rally is planned for lunchtime. Regional governor Hugo Galindo declares this illegal, and more than one thousand armed police are sent to occupy the city centre. Violent confrontations rage across the city for two days, with riot police armed with tear gas facing protesters with stones and slingshots. More than 175 people are wounded, including two blinded by tear gas.

22nd March 2000 – An unofficial referendum is organised by the Coordinadora. 96% of 50,000 voters are opposed to Aguas del Tunari and the privatisation of their water.
6th April 2000 – Oscar Olivera and his Coordinadora colleagues agree to meet government officials to discuss the situation. They are arrested and released in the early hours of the morning.

7th April 2000 – 10000 people gather in Cochabamba’s main square. Galindo recommends that the water contract be cancelled, and informs Archbishop Solari, who tells Olivera. The celebrations are cut short when Bechtel’s representatives refuse to confirm their departure. Galindo resigns at midnight, declaring that he does not want to be responsible for a ‘blood bath’.
8th April 2000 – A ‘state of siege’ (a situation similar to martial law) is declared by President Hugo Banzer. It allows for arbitrary arrests and detention, as well as imposing a curfew and travel restrictions. A 17-year-old bystander, Victor Hugo Daza, is shot dead by a captain of the Bolivian Army.

10th April 2000 – The Bolivian government signs an agreement with Oscar Olivera handing control of Cochabamba’s water over to the Coordinadora. Bechtel officials had fled the country.
November 2001 – Aguas del Tunari makes an application to the International Centre for Settlement of Investment Disputes (an arbitration body created by the World Bank), claiming that the revocation of its contract in Cochabamba was a violation of a bilateral trade agreement.

25th February 2000 – Aguas del Tunari and Bechtel seek $25 million in damages for breach of its contract.
24th April 2002 – Oscar Olivera accepts the Goldman Environmental Prize Award.
August 2003 – More than 300 organisations from 43 countries send an International Citizens Petition demanding that the Bechtel v. Bolivia case be transparent and open to citizen participation. It is rejected.
19th January 2006 – Bechtel and Abengoa, the main shareholders in Aguas del Tunari, agree to drop their ICSID case against Bolivia for a token payment of 2 Bs.