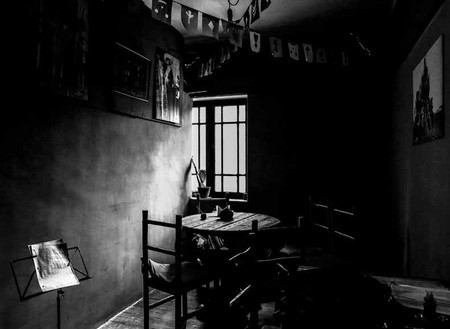 The Unconventional (or Downright Cranky) Restaurateurs of La Paz

Even before I learned that this issue of Bolivian Express would be food themed, my housemates were already overwhelming with me with restaurants to visit, street stalls to try, markets to die for. Eating is clearly big business in La Paz, where six different salteña cafes can exist on the same street and still turn a profit. What impresses me most, though, is talk of those eateries that are decidedly not big business: family-run or one-man enterprises, seemingly scraping what they need to get by.

Over the course of my first week here, I discovered some of La Paz’s greatest ‘anti-business’ eateries: places built into family homes, where chefs are waiters and serve bills on the same napkin you just ate with—and where the owners sometimes make no effort to hide an intense and personal dislike for their customers. What links all these, from the friendliest to the most hostile, is their resistance to the kind of sleek, monotonous corporatism that increasingly dominates British high street dining, where the chain reigns supreme. Instead, these places revel in their own glorious eccentricity. But can this last?

One of the major consequences of Bolivia’s recent economic boom appears to be the success of fast food outlets. Ask Bolivians why McDonald’s famously failed in their country (the company shut the last of its doors here in 2002) and there’s a good chance they will tell you this was not because of the cultural rejectionThere are always two sides of the story, and while fast food, or even more upmarket chains such as Starbucks, could certainly represent the corporatization and monetisation of food culture, they could also simply suggest a more gastronomically complex society. Many Londoners can start their night in a little-known speakeasy and end it ferociously nuzzling a post-club McDonald’s—so why not paceños? Bolivia is at an interesting juncture now, in which emerging chains could become either an addition to or a replacement of traditional eateries. Exactly what will happen is hard to guess. All I can say is you’ll miss those handwritten menus when they’re gone. of fast food, but because it was too expensive. But Bolivians are getting richer, and the presence of Burger King, as well as numerous home-grown brands—such as Pollos Copacabana, Api Happy and Panchita—show that locals enjoy their quick carbs as much as anyone.

Jose Maria Pantoja, owner of Los Nopalitos, feels no fear of competition from the fast food giants. For him, these are two different market niches, both of which La Paz has room for. After all, for all the numerous high street chains to be found in Western food culture, there is also the backlash trend from those missing the intimacy and uniqueness that chains inevitably lose—think of Rachel Khoo’s two-person restaurant in her Paris apartment, or Mayfair’s re-creation of Phileas Fogg’s gentleman’s club (reborn as slick cocktail bar).

There are always two sides of the story, and while fast food, or even more upmarket chains such as Starbucks, could certainly represent the corporatization and monetisation of food culture, they could also simply suggest a more gastronomically complex society. Many Londoners can start their night in a little-known speakeasy and end it ferociously nuzzling a post-club McDonald’s—so why not paceños? Bolivia is at an interesting juncture now, in which emerging chains could become either an addition to or a replacement of traditional eateries. Exactly what will happen is hard to guess. All I can say is you’ll miss those handwritten menus when they’re gone.

Los Nopalitos (Avenida Ecuador between Guachalla y Rosendo Gutierrez)
Los Nopalitos is perhaps the archetypal example of laid-back eccentricity. Founded by José Maria Pantoja after he fell in love with Mexican cooking while living there in the 1980s, Los Nopalitos features walls decorated as an homage to the country’s bandits and revolutionaries. The location was chosen because one of José’s friends was already living there, and the restaurant retains its homely feel, right up to the shower and bathtub that remain to surprise visitors to the baño. Even the staff seems more like a family—José works alone, alongside one chef, whose baby son José calls el diablo in the ringing tones of an exorcist-performing priest.

José prioritises the freshness of his ingredients—‘my quesadilla comes with the streaky texture and flaky edges that show it is hot from the pan, not out of a packet’—even where such attention to detail means compromising on size. Indeed, the dinky-but-tasty portions can make it seem as if you are getting a tasty snack from your grandma rather than a restaurant meal, but this is all part of its charm. A trip to Los Nopalitos is not just about the taste of the food, but the taste of one man’s way of life.

Chifa La Hoja Verde (Av. Ecuador 2514 esq. Belisario Salinas)
With its stucco tiles and mismatched tables and chairs, La Hoja Verde’s aesthetic is that of a Sino-sized greasy spoon—there may be soya sauce and toothpicks on the table instead of salt and pepper, and monochrome ink prints on the walls instead of calendar pinups, but this is the only clue that you’re not getting your English fry-up here. The food works by taking the best of Chinese takeout (the copious oil, the deliciously metallic taste of MSG) and running with it. Not exactly haute cuisine, then, but shrewd about what many punters want.

The real attraction of La Hoja Verde is, however, its owner: Señor Ye. He engages with the stereotype of the chino renegon with gusto, wantonly making me move seats (and one family move an entire table) midway through the meal, as if staging some kind of musical chairs for his private enjoyment. When taking too long to order, he simply walks away—perhaps to give us more time to choose, perhaps simply to catch the football scores. According to the online food review site Buenos Restaurantes de La Paz, the reason for La Hoja Verde’s total lack of publicity—the restaurant doesn’t even have sign on its shuttered front—is because Ye’s wife refuses to be belaboured with any more cooking. An enjoyable bit of guesswork, but hard to swallow for those who, like me, cannot see Ye taking lip from anyone. This, though, is the joy of La Hoja Verde: go for guilty food and plenty of mythmaking.

Roberto Cazorla Guzman tells me that his venture first started because friends would always want to go come back to drink at his house after a night out. One day he simply bowed to pressure—and La Costilla de Adan was born. A single glimpse at the bar, however, shows that the creation of La Costilla that we see today has been a far greater labour of love. La Costilla is a veritable Alice in Wonderland explosion of strange and marvellous artefacts—all starting with a coffee can that Roberto ferreted from his grandmother at age 5.

Through a life spent in much of Europe and South America, and in a variety of professions (architect, graphic designer, hairdresser), Roberto’s collection slowly amassed. It is these souvenirs that crowd the walls and jostle from the ceiling in today’s bar. Reeling off a few of the best, Roberto lists a crystal rock mirror, tables adapted from glass-topped bathtubs—just a few of the 5,000-plus objects that decorate his bar.

But La Costilla is decidedly not about being flashy. Even as he plans a second-floor extension in which to serve snacks (goat cheese empanadas, tamales from his homeland Tupiza), Roberto still proudly talks of his spot as ‘the best kept secret in Sopocachi’—customers have to knock on La Costilla’s deceptively residential door to come in. And he has reason for wanting to keep privacy, after all—Roberto’s house is attached to La Costilla: ‘I have a cat and seven dogs!’

For Roberto, the relaxed feel of the bar comes as a plus. He has no security and has never needed it. It is possible to pay proper attention to customers, sometimes with surprising results—most notably the night he found himself serving two schoolmates that he had not seen in 25 years, one now living in England, the other in Japan. A fitting reunion in a bar that is so much the culmination of many years and places travelled.