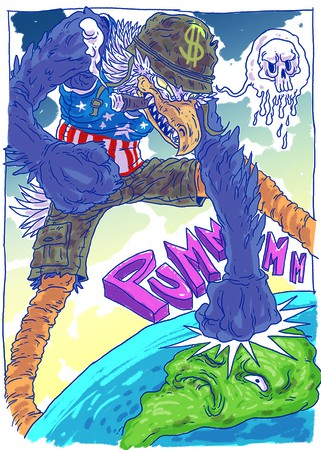 Bolivian President Evo Morales has refused to toe the USA’s line since he came into power, and has clashed with the ‘land of the free’ in several high-profile incidents, including expelling the Drug Enforcement Agency (DEA) and the US ambassador, Philip Goldberg, both in 2008. In the words of the US Department of State, ‘Relations with the United States deteriorated as the Bolivian Government began to dismantle vital elements of the relationship.’ This tone was set before Morales even came to power, when he accused the United States of state terrorism—clearly showing that Morales does not mince his words.

Growing up in Britain—where at least in the public sphere and in the absence of any serious political analysis, it is often thought that when the United States calls, Britain jumps—this gringo finds Morales’s foreign policy truly mind-boggling, flabbergasting and dangerously impressive. Is this foreign policy expedient or foolish? It is undoubtedly brave—a small country in South America that dismisses US requests with such disdain. So why this stance? It is important to realize that it is not only Morales who endorses this anti-US policy, but also other key figures in his administration such as Vice President Álvaro García Linera and Minister of Foreign Affairs David Choquehuanca. Perhaps the best way of looking at this position is through the lens of imperialism—after all, Bolivia and Latin America’s history is inseparable from its crushing yoke.

But first let us cast our minds back to the Morales administration’s various clashes with Uncle Sam over the years. The expulsion of the DEA and American Ambassador Phillip Goldberg, whom Morales accused of collaborating with the political opposition to the government and fomenting violent dissent, both occurred in the tumultuous year of 2008. Ejecting the DEA is one thing, and narcotics have long been a sticking point in the US-Bolivia relationship, but expelling the US diplomatic representative is another thing entirely. It implies a total rejection of US diplomatic principles. Significantly, Morales said that he had no regret in taking this action and did so ‘without fear of the [U.S] Empire.’

Despite hopes for a rapprochement, once Obama came to power in 2009, US-Bolivian relations took a further tumble when USAID (the United States Agency for International Development) was expelled with accusations of it funding organisations opposed to Bolivian government initiatives. And the latest in this long series of US-Bolivian clashes garnered the most international attention: the forced grounding of President Morales’s state aircraft when it was rumoured that NSA whistleblower Edward Snowden was on board. This incident soured any possible reconciliation as Morales railed against what he saw as the insidious world influence of the United States and again framed the incident in terms of imperialism, saying, ‘The Empire and its servants will never be able to intimidate and scare us.’

The Morales administration defines itself as anti-imperialist, but you can still easily see imperialism’s scars in Bolivia today. I spoke to Reina Gonzales, an expert on US-Bolivian relations, to get an idea of how this ideology directs the Morales administration. She stressed that to just focus on Bolivia and Morales when considering the context of imperialism is a flawed view. She stressed Bolivia’s history of exploitation and that of several other Latin American countries, such as Argentina, Brazil and Venezuela, all of which have faced imperialist threats from the United States. Gonzales says that Morales is part of a political system that has only been democratic for a short time, and so is responding to and directed by demands from citizens ‘that have not been served for a long time’.

But imperialism in Bolivia did not start with the United States. The city of Potosí, for example, was once one of the richest cities on earth, due to the silver extracted from Cerro Rico with the toil, sweat and blood of indigenous workers and slaves. Their descendants still mine the deep shafts today, but the unimaginable wealth that was produced has largely been exported, funding first the Spanish crown and, these days, foreign mining companies. Potosí is just one small part of a raw, barely healed scab which leads to such a large suspicion of foreign influence.

The United States has also had its fingers in Bolivia for a long time. Its influence has not always led to positive results for the continent, and Bolivia’s history provides ample proof. Beginning with the discovery of Bolivia’s massive tin deposits in the early 20th century, there have been various cycles of spiraling debt to US creditors over the decades. After World War II, relations were strained in the aftermath of the great revolution of 1952, and US offers of assistance often came with conditional requirements attached that seemed designed to take sovereignty out of Bolivia’s hands.

The narcotics issue is key to understanding this volatile relationship, and when you take into consideration the United States’ anti-coca position and the fact that Morales was a cocalero and still is the leader of the largest coca-grower union in Bolivia, the picture becomes clearer. Operation Blast Furnace in 1986 stands out as a sore case. The USA decided to directly tackle its domestic cocaine problem by attempting to destroy the drug’s precursor at the source. Several Blackhawk helicopters and over a hundred US personnel were deployed to Bolivia to eradicate coca fields. Imagine foreign troops entering your country and destroying a crop that has been cultivated and used by your people for millennia. Imagine violent clashes with a foreign-funded anti-coca police force resulting in direct physical confrontation and oppression. It would fill anyone with burning anger, and of course this was the context in which Evo Morales emerged. According to Gonzales, ‘He himself suffered torture and oppression’, emerging as a political leader opposed to US influence and neoliberalism.

Im'not attempting to condemn the United States here, or endorse Morales’s stance. Political expediency definitely enters the equation. Opposing the United States clearly has some politically advantageous effects. Although the Morales administration has tried to usher in an era of multiculturalism and inclusiveness, it is clear that many pre-MAS power structures and economic policies remain intact. Focusing anger on an external, malign force is certainly a tried and tested political tactic. In understanding the government’s stance, then, this anti-US rhetoric can be understood as a combination of political opportunism and the bitter legacy of foreign imperialism. Morales has come to power on the back of a mass social movement that represents a previously marginalised people. Whether Morales has achieved and implemented all that he said he would is a different debate. But Morales and the once-marginalised now have power in their own land, when for centuries they have been denied it, and the last thing they want is for the long arm of any foreign power, in this case the US, to regain influence. Whether Morales’ dramatic break with the US results in long-term benefit for Bolivia, however, remains to be seen.