For the Clown Association of La Paz, the Show Goes on in the Unlikeliest of Places

The bar El Acuario is hidden deep amongst the busy, traffic-filled streets in the commercial district of Max Paredes. The dizzying blue and red plastic covers of the street stalls make the journey to the boliche intense and stressful. Behind three women selling chicharrón lie some steep steps leading down to the 'El Sotano', a popular nickname for the bar. The playground-like coloured rocks on the wall guide visitors down the stairs towards a small lamp hanging above a wooden door. There is no other sign to indicate that this is a popular bar for clowns.

The owner, Don Chelo, opens the door. Luis and I sit on some wooden chairs at a table laminated over with a Coca Cola advert. The peeling walls and sticky smell of beer and cigarettes could mistakenly make you believe you are entering a typical boliche. At the front, where various liquors are on display, two signs catch my eye; 'if you drink to forget, pay before you forget', and the second one, written in blue biro on a piece of lined paper, says 'we sell soft toys'. Behind the second sign is a pile of dusty-looking teddy bears.

When Luis first told me about El Acuario , the image that popped into my head was the cartoonish hybrid between a friendly clown and a depressingly drunk man. I have always found the clown, perhaps due to iconic horror stories and films —such as Stephen King’s 'IT'— a depressing and eerie character, so the idea of a bar full of drunken ones sent cold shivers down my spine.

However, the juxtaposition of a half-empty bottle of singani next to a toy rabbit is, to my surprise, the only thing to live up to my nightmarish vision. It appears that clowns don’t exactly drink. In the time we spend at the bar, the face-painted patrons order 2 bottles of Coca-Cola.

Tibilín, one of the more lively and chatty clowns we manage to speak to, smiles as he continuously pushes his prosthetic red nose back into place. Instead of walking, he skips, and when he sits down he constantly fidgets—as a child might. 'We don’t drink when we are dressed as clowns', he begins, 'the AMI association [Artistas del Mundo Infantil] says we can’t be drunken clowns. Its also the rule here in the bar. We can’t drink or smoke -- what would happen if a child saw us? We would break the fantasy'. He continues to wipe off the thick layer of face-paint with a baby wipe.

As difficult as it is to carry out a full interview with all the distractions and hysteria, I am slightly disappointed to not find a single clown drinking a Paceña.

The manager tells us that he received an invitation for the misa of a clown who died a year ago. We ask Tibilín how it feels to a fellow clown: 'It is sad when a friend dies. They don't even let us into the funeral when we arrive dressed as clowns, they say it is a serious occasion, but we are completely serious, paying our respects. There are also close friends who are not clowns who have died. For instance, there was a woman we called Espica, she served us food, looked after us when we had a problem', he giggles, 'she also used to pull our ears if we were cheeky...all the clowns knew her. What was most hurtful was when she died there was not a single family member there for her. So, all the clowns had a meeting and we took care of everything'.

A few more clowns arrive around 10 p.m. Tamborcito comes to our table. His half-asleep son sits on his lap. 'My dad was lucky enough to be one of the first clowns in Bolivia. He started off his career by working in a circus in the Cancha Zapata. He loved the atmosphere and making people laugh. On the television, they were looking for comedians, artists who could entertain the whole family. One of the presenters called Margarita was looking for people to create a children’s show; so he threw himself at the opportunity and started to work on the show'.

Two clowns sitting on the table next to us reach over with a bottle of Coca Cola; 'this one’s on the payasos', they laugh.

Tamborcito started training as a clown when he was 13; 'at first it was embarrassing, wearing those big shoes and trousers, people in the street would stare, but bit by bit I got used to it...not only is it the artistic talent that is difficult to achieve, but it is also how you present yourself and make yourself understood by the crowd. I have worked with Aymara and Quechua people who didn’t speak Spanish and had to mime the whole act to make them laugh without speaking! You have to be prepared for everything, you have to learn to get a smile from everyone, ignoring the situation, especially a child'.

We meet Chirolín and Yuyito, a pair of clowns getting ready to perform at a birthday party. Like the other clowns we meet at the bar, the pair are members of the AMI Association. Ignoring the improbable number of mirrors hanging from the walls, Yuyito uses his small pocket-sized mirror to apply face-paint .

Chirolín has four children but explains he has never been a clown at any of their birthdays. He always hires another clown because he understands that his friends also need to 'feed their families'. He pauses and laughs; 'there are always plenty of clowns, as the friend I hire will tell his friends and it will be more like a clown festival than a birthday party!' Yuyito is shy, quiet and playful -- whilst Chirolín is distracted, he steals a handful of his balloons and grins showing off his missing teeth. He continues applying fluorescent orange paint around his eyes.

For me, one of the most enchanting aspects of a clown lies in the transformation they go through. The Swiss clown Grock, also known as 'The king of clowns', once said that 'the genius of clowning is transforming the little, everyday annoyances, not only overcoming, but actually transforming them into something strong and terrific'.

Chirolin explains that it is in the nature of clowns to be actors—even when they are dealing with personal problems they must overcome them in order to entertain people: ‘we can be dying on the inside but smiling on the outside’.

Once their faces are painted white, cheeks red, and noses on, Chirolín and Yuyito undergo the final step in their transformation, suddenly breaking into an incredibly high-pitched voice. As we finish the interview, it is hard to take these two squeaky-voiced strangers seriously. They get up in a hurry —with their oversized shoes and undersized stripey shirts— head to the door and depart with a 'chausito'.

All the clowns agree that El Acuario is a special place. Tamborcito explains that most other bars in the area will not allow clowns to eat, drink and get changed. 'Usually we meet Fridays or Saturdays to have lunch or supper. There was this other bar called Bajo del Puente , we would always go to eat there, have our meetings, until one day they changed owners. There are people who don’t like this art- so they chucked us out. Here, the door is always open. We all meet here, we get changed, go to work, come back and take off our makeup. The owners take care of us.'

When speaking to Don Chelo, the owner, he speaks of the prejudice and closed-mindedness of many people: 'but the clowns are calm, they come in laughing, singing and always change the mood of the place - they are friendly and affectionate'. Tibilín says that although many bar owners are discriminatory, the majority of people in the streets admire clowns. 'For example', he says, 'once a taxi driver didn't want to charge us for the ride and told us that one day a clown made him laugh so much that he forgot about his problems. It taught him the lesson that no matter what problem you have, you have to keep going'. Chirolín admits that some children are 'the small stone in [his] shoe' but it doesn't matter because they can all laugh about it over a glass of Coke in El Acuario.

Its hard to leave the bar, even after having spent the past two hours here. In the corner of one of the tables is a large plastic cup filled with bottle caps and used razors. We leave this hectic little world just to enter another one. As we walk up the steps onto the street, the fresh air awakens us from the surrealist dream we’ve just left behind. We emerge into a labyrinth of multicoloured street stalls. The pervasive smell of fried food hanging in the air signalling our entry back into the strange and manic reality of La Paz above ground. 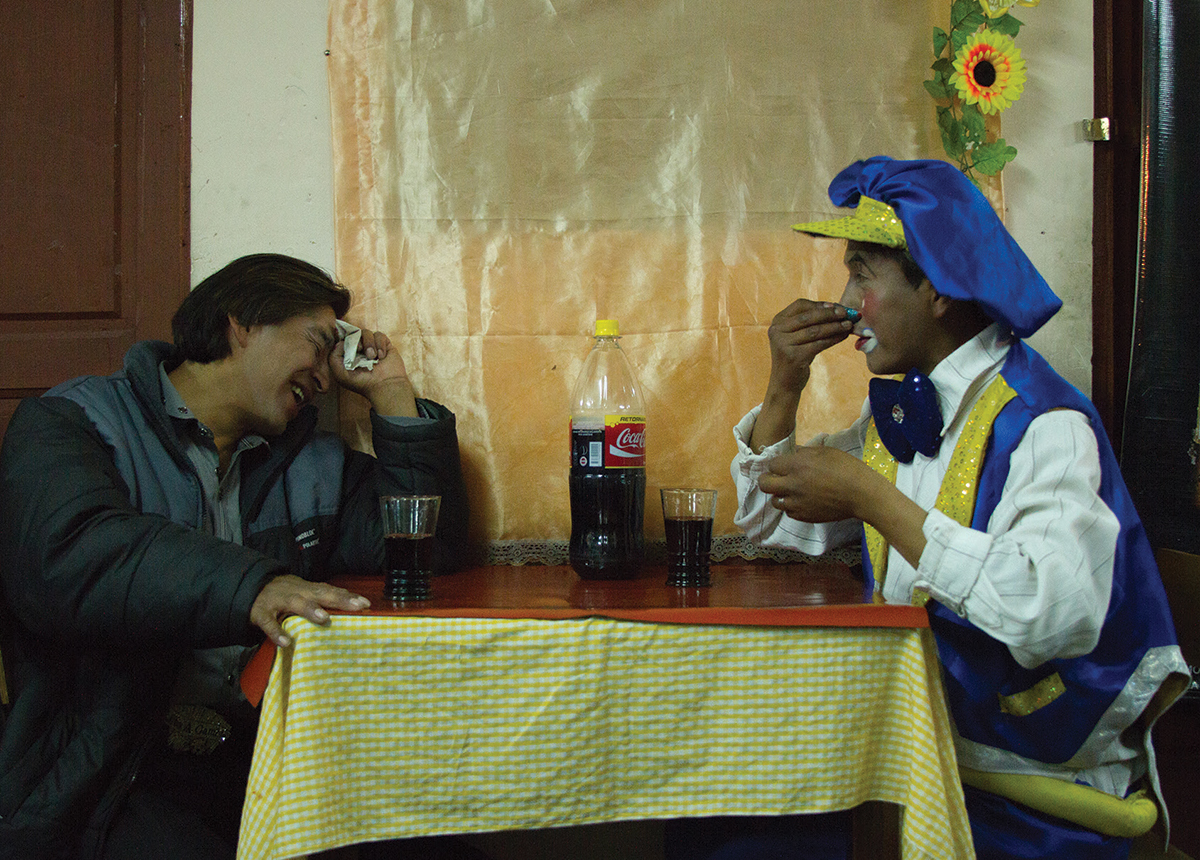