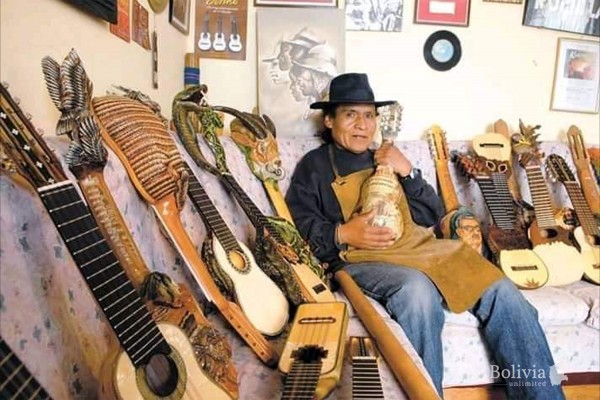 In memory of Adrián Villanueva Quisbert (1948-2020) we want to share two pieces of writing. The first is my own modification of the original funeral service speech which was put together by his closest family. The second text is written by Diana Scrafton, ex-manager of Rumillajta and mother of his twins Mauro and Floren.

Adrián was temporarily in London visiting his family when lockdown struck. As an active outgoing man he found the situation highly frustrating. Facing the impossibility of returning home to his wife Maria and young daughter Aruza brought his spirits down. He was admitted to hospital with COVID symptoms and within the space of two weeks he lost his life to this virus. It was a sudden and shocking departure, painfully hard to accept. At 71, he had an abundance of dreams, plans, projects and thirst for life. His paternal love and dedication brought him to be close to his beloved son Amaru here in London. Together they would take long walks playing their quenas until sunset. As family we now know our beloved father is no longer split between two continents, he is with us all, at all times. 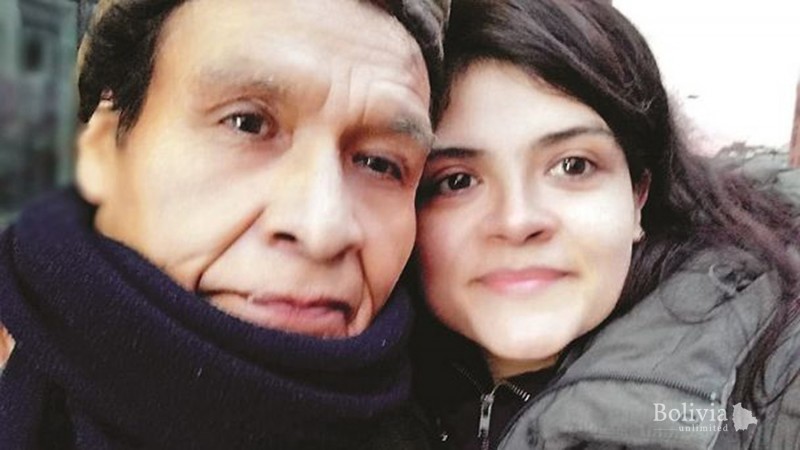 A tribute to Adrián marking his departure

Dear great family, we are gathered here today in this chapel on Wednesday, June 3rd , 2020 (London UK) to celebrate the life of an extraordinary human being, a Magician of the Wind with an exemplary artistic career and whose esteemed knowledge and contribution in the world of music and instrument making has marked history in Bolivian culture.

Adrián, son, father, brother, partner, friend. Lover of his land and the sacred mountains of the Andes; a constant explorer of rural villages of the department of La Paz where he would travel to, leaving at the crack of dawn on expeditions to trace specific items, people, festivities, locations or information that he wove into his creative endeavours and the depth of knowledge he embodied. He was also known for traveling for hours simply to enjoy his favourite fish soup Wallake. He was a fabulous story teller with an impressive memory, he could tell the same story dozens of times with the same sense of wonder, excitement or suspense. Generous and noble, with a giant heart, willing to give the best of himself to his family, friends and those he crossed paths with, even those he didn't know. Adrián grew up in hardship and was one of nine brothers and sisters (three of which survived), he knew first-hand what it was like to be in need; on various occasions he organised fundraisers or took from his own pocket  to help people in need of urgent medical attention. Over the years, he opened his house to countless visitors from all over the world. He valued friendship immensely and actively cultivated his relationships. He loved hand-written letters, then emails and finally when he surrendered to the digital era, he would text extensive heat-felt messages to those he knew. Committed to Bolivia and the socio-political struggles and causes, he remained faithful to his land of origin, though at heart he was also a citizen of the world, an insatiable traveller, fascinated by other cultures, with a special fondness and admiration for Japan.

A professional Andean flute (quena) player, with a musical career of more than 50 years in which he was a member and promoter of distinguished Bolivian folk groups, such as “Rupay”, “Los Trovadores de Bolivia”, “Kallawaya” and more notoriously “Rumillajta”. Craftsman and innovator, he was recognized worldwide for his creative abilities inventing different musical instruments using unusual construction methods inspired in traditional instruments such as the Charango and his faithful companion: the Quena. Adrián insisted in recycling and curing wood whenever possible and explored with various materials in quena construction such as clay, bone, plastic, silver and even gold, culminating in his well-known paper quenas and charangos which could be played professionally. One of his latest inventions was the Ukumanta (meaning ‘from the depths’), a low pitched tall bamboo flute that has a soothing effect on the listener. He had an eye for detail and beauty; he collaborated with various other artists and craftsmen in order to materialise his inventions and make magic happen. He was an inspired human being and a great motivator to others. He became a Maestro, a highly esteemed teacher and guide of young generations of musicians and instrument makers. For many he was an Amawta, wise man, spiritual guide and teacher of life.  Coincidentally he played the character Medicine Man in the Oscar-nominated film production "Amazon" in which he plays a Kallawaya, healer and bearer of ancestral medicinal knowledge.

Today we mark his departure from this physical plane by expressing our love and infinite gratitude for all his life's work, enthusiasm, creativity, generosity, selfless dedication, his smiles, teachings, and especially for all the love he transmitted towards his family and friends, towards life. Adrián's spirit has already embarked on a journey back to the Great Cosmos and the subtle worlds that can only be felt within each human being. Adrián will continue to live on through his music, words, stories, memories, teachings in the hearts of all those who loved him and he touched. With the powerful sound of the Pututu (Andean horn) resonating into space we offer you this send-off Jach’a Adrián! … Until we meet again.

Anyone who ever shook hands with you Adrián, would feel your energy directed towards them communicating warmth, interest and sincerity. The goodwill and firmness of your handshake, your bright gaze and rich voice helped open doors across the world, building trust and winning over countless contacts who became friends and stayed in touch, however distant. Many contacts became students of yours, learning to play Andean music on your flutes and stringed instruments. Like you, they went on to enrich their own and other people’s lives with their music.  One such student recalls how you always had the “joy of giving in your eyes” when you presented him with new quenas as he grew from child to adult.

As a youth you learned to knead dough as a baker and to sew finely as a tailor but music caught your heart and as a young man, you crafted your first quena. Over the years you worked with many different woods and interesting other materials, developing great skill as a luthier and your string and wind instruments can be found in The British Museum and the Pitt Rivers in Oxford. Two of your charangos, coca-leaf embossed, sit in the homes of Condaleeza Rice (one-time US Secretary of State) and Michelle Bachelet, Chile’s first woman president and now the UN’s High Commissioner for Human Rights. Both gifts were graceful political statements which won much media coverage.

As a musician you played with the greats of Andean Folk Music and performed in 4 continents. You sang and made the quena and quenacho sing and all manner of panpipes and proudly played the bombo (drum) too.  With Rumillajta you performed on some of the world’s greatest stages: The Pyramid Stage at Glastonbury Festival, the Kennedy Centre, the South Bank and many times at The Edinburgh Festival.  As a musician you shook the hands of Bolivian President Evo Morales, the Guatemalan Nobel Peace prize winner Rigoberta Menchu, and the world-renowned Argentinian composer and musician Astor Piazzola. In the UK you met and conversed with Ronnie Scott and…Princess Anne. You recorded more than a dozen albums including one of your own.

As a father you cradled each of your 5 babies, changed their first nappies and brushed away their tears and smoothed their hair. You could peel potatoes so finely, the toughest skins melting away. With your hands you could catch a blackbird in a bush and lift seaside rocks to uncover tiny baby crabs and point to tiny fireflies in the darkness of a Cornish coastal summer evening. Suchi the cat snuggled inside your sleeping bag when a kitten and so many years later welcomed you home.

Into your hands were placed numerous awards in recognition of your great contribution to Bolivia’s traditional music culture which you cultivated at home and abroad.  As an international musician, instrument-maker, music teacher, and lead actor in ‘Amazon’ you became a memorable cultural ambassador for Bolivia.

Adrián, when you played your energy flowed fast and free through your quena and quenacho. The notes danced high and low and melodies streamed forth, sturdy fingers spreading and dancing over the holes, spanning great widths. All who have heard you play have been moved and energised by your music and many wonderful memories will be carried forward by those who have known you. Your vibrant legacy is already strongly manifest in each of your children and your beautiful instruments and recordings.