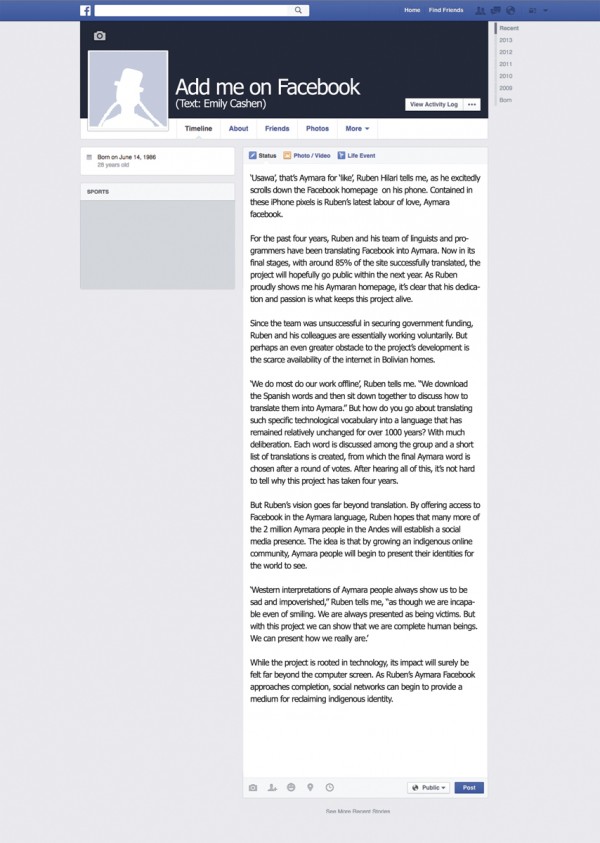 '"Kusawa", that's Aymara for "like"', Ruben Hilari tells me, as he scrolls down the Facebook homepage excitedly on his phone. Contained in these iPhone pixels is Ruben's latest labour of love, Aymara facebook.

For the past four years, Ruben and his team of linguists and programmers have been translating Facebook into Aymara. Now in its final stages, with around 85% of the site successfully translated, the project will hopefully go public within the next year. As Ruben proudly shows me his Aymaran homepage, it's clear that his dedication and passion is what keeps this project alive.

Since the team was unsuccessful in securing government funding, Ruben and his colleagues are essentially working voluntarily. But perhaps an even greater obstacle to the project’s development is the scarce availability of the internet in Bolivian homes.

'We do most do our work offline', Ruben tells me. 'We download the Spanish words and then sit down together to discuss how to translate them into Aymara.' But how do you go about translating such specific technological vocabulary into a language that has remained relatively unchanged for over 1000 years? With much deliberation. Each word is discussed among the group and a short list of translations is created, from which the final Aymara word is chosen after a round of votes. After hearing all of this, it's not hard to tell why this project has taken four years.

But Ruben’s vision goes far beyond translation. By offering access to Facebook in the Aymara language, Ruben hopes that many more of the 2 million Aymara people in the Andes will establish a social media presence. The idea is that by growing an indigenous online community, Aymara people will begin to present their identities for the world to see.

'Western interpretations of Aymara people always show us to be sad and impoverished,' Ruben tells me, 'as though we are incapable even of smiling. We are always presented as being victims. But with this project we can show that we are complete human beings. We can present how we really are.'

While the project is rooted in technology, its impact will surely be felt far beyond the computer screen. As Ruben's Aymara Facebook approaches completion, social networks can begin to provide a medium for reclaiming indigenous identity.