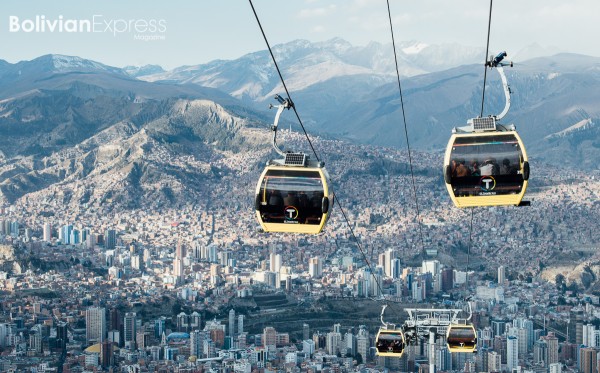 Coming over the ridge from neighboring El Alto in the darkening twilight, travellers are met with an almost otherworldly sight. Through the smeared taxi windscreen, La Paz creeps into view, nestled in a deep crater. Its litter of yellow pinprick streetlights resemble an expanse of stars floating at levels dizzyingly close to earth.

At nighttime, the view of La Paz is distractingly breathtaking.

After the sun has woken and the mid-morning salteñas have been scoffed down, the city’s actual topographical contours become a little easier to map out. La Paz is a city of verticality. Its many neighbourhoods sit at varying heights, interlinked by sloped streets that call to mind San Francisco, California, but that are populated by packs of self-assured street dogs, chaotic armadas of public minivans and cholitas in their trademark bowler hats selling wares by the roadside.

At 3650 metres above sea level and enclosed on all sides by the Bolivian plateau or altiplano, La Paz stirs in a canyon carved out thousands of years ago by Rio Choqueyapu. This choice of location serves some practical purposes: the gorge walls shield it from harsh cold winds, and part of its water supply comes from the runoff of nearby Andean glaciers. But the extreme vertical topography plays a role beyond that, defining what makes La Paz the city it is.

‘The city is like a carpet over all the land,’ says Carlos Gallardo, Dean of Architecture, Art, Design and Urbanism at La Paz’s Universidad Mayor de San Andrés. ‘When you’re inside it, you say, “wow, it’s so big.” But when your focus is on the city from outside, the landscape becomes most important.’

Sitting in his office, Gallardo motions his hand over an image of the city’s slanting neighborhoods on his computer screen. With palpable enthusiasm, the profesor describes what one might label a paceño architect’s doomsday scenario: the towering waters of Lago Titicaca washing across Bolivia’s administrative capital.

‘If we lost La Paz, we wouldn’t lose the landscape,’ he says simply.

Coming from a renowned architect, the morbid example points at a humbling truth. The city’s identity relies heavily on its jarringly vertical topography. When compared to the epic scale of the landscape, it becomes but a carpet.

Beyond its natural beauty, La Paz’s topography shapes how its residents live and how society grows and interacts. For only 3 bolivianos, residents and visitors can hitch a ride on the Mi Teleférico, the expansive cable car system that acts as a unique answer for public transport in a city whose districts are scattered at varying elevations.

‘It’s a dream of modernity,’ says Carlos, with unabashed pride. ‘La Paz is a wonderful city to fly over… people feel like the astronauts of NASA.’

Whereas cities such as Los Angeles in California are arranged with the wealthy in the hills and lower income earners further down, La Paz’s social hierarchy is literally flipped. Nearly 500 metres lower than the rest of La Paz, the Zona Sur houses affluent and generally white or mestizo residents, including local politicians, military officials, foreign businessmen and diplomats. On the other side of the economic divide, the simple brick homes lying haphazardly on the hillsides in and below El Alto are mainly composed of an indigenous working class. This part of the land is less safe to live on due to unstable rock foundations and the possibility of devastating landslides.

According to sociologist Jorge Derpic, who studies lynchings, citizen security and justice in El Alto, this unusual class layout is rooted in the darker chapters of the city’s tumultuous history. Following the end of the 1952 revolution, indigenous and rural groups like the Aymara migrated toward the city.


The city experienced another influx of rural, largely indigenous migrants following structural adjustment reforms imposed on the country in the 1980s that resulted in the closing of state mining and other enterprises. At the time migrants again flooded La Paz and El Alto to join the informal economy as vendors or to take unstable jobs as public transportation drivers. ‘There was an explosion of people coming to the city, trying to sell whatever they could,’ says Derpic.


Classism and racism were rife among the predominantly white or mestizo elite around that time. ‘More than just saying they wanted to live in a warmer place, [the elites] didn’t want to be mixed with people they considered dirty,’ Derpic points out. ‘They remained in the centre and move to the south of the city while people from the rural areas started living in the outskirts.’

La Paz’s social geography, as if scattered by the wind across a rocky, vertical landscape, remains quite similar today. Its identity is chiseled by the topography on which it pulses, its people forged by a strange, rugged and elevated system.

La Paz is a city of verticality. Its many neighbourhoods sit at varying heights, interlinked by sloped streets that call to mind San Francisco, California.