A user’s guide to getting around in La Paz 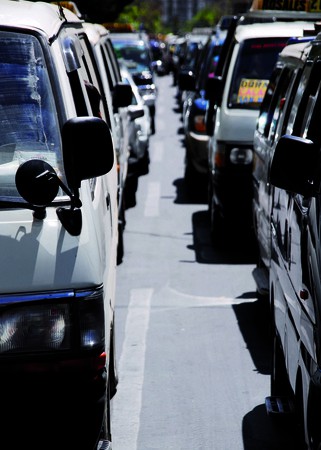 Every big-city transportation system has its quirks and La Paz is no exception. This guide is intended for the visitor or short-term resident who wants a leg up before subiendo one of the many options available for getting around La Paz.

TAXIS come in two varieties: Radio taxis which charge 6 Bs. for short distances, and more for longer distances, which needs to be negoti­ated (bartered) with the driver before getting in. Advantages: they can be ordered by phone (safest), and the fare is shared among the up-to-4 passengers they can accommodate. (Ir?)Regular taxis, which charge 3 Bs. per person, are usually identifiable by wide red and green stripes on the roof and/or little signs behind the wind­-shield. Many people consider these taxis to be very dodgy as they are unregulated. To be on the safe side it is recommended to use them only during the day in the city center. Advantage: you pay less if travelling alone. Disadvantage: More expen­sive than a radio taxi if there are more than two passengers. Note: pay taxi drivers with exact change whenever possible to avoid being overcharged by a driver who claims not to have change. If you should have this problem, have the driver take you to the nearest tienda/quiosco where you can make change ¡OJO! – All fares go up at night.

TRUFI = Taxi RUta FIja: These are fixed-route taxis that charge 3 Bs. for most routes, sometimes less if the distance is shorter. They are identifiable by the larger signs propped up on their dashboards listing their main destina­tions. To use these you have to learn their routes to determine if they will take you where (or near where) you want to go. Some routes are more easily identified by the two little green or white flags attached to the front bumper. Advantages: more com­fortable, fewer stops. Disadvantage: If you have long legs don’t be the first to get in the front seat or you may be the one expected to cozy up to the driver, who will knock your legs every time he shifts gears, shoving your knees ever more forcefully into your chin. In this position you can kiss your teeth good-bye if he neglects to slow down for a rompemuelles.

CARRY (Suzuki model name) has become the term used to refer to most small fixed-route vans, usually seating 6-7 passengers. They charge a minimum of 1.50 Bs. even if you just go a block or two. Disadvantage: sardine syndrome, i.e. not much leg or head room.

MINIBUS refers to large fixed-route vans seating 11-14 passengers that normally charge 1.50 or 2.30 Bs. The “official” fare is 2.30 Bs. - but many drivers offer a lower fare in the hope of getting more riders. Some drivers will tell you they charge the higher price during peak hours or after a cer­tain time at night, but there is no con­sistency to these claims. Look for fare signs on the dash; if there isn’t one assume they’re charging 2.30 Bs. or ask before boarding. Disadvantages: they typically make many stops and you often have to get out, repeated­ly, to allow other passengers to bajar. To avoid this try to get the seat next to the driver or on the far left side of any row. Typically minibuses will have a voceador/a on board to collect fares, shout out the destinations to attract passengers (also for the illiterate or folks with poor vision), and to advise the driver of upcoming stop requests. They will often announce when they are about to collect fares by saying “Se alisten sus pasajes – sueltitos no más (por favor)”, which means “Get your fares ready – small change only (please)”. Paying with 20 Boliviano bills or larger is not appreciated, though many locals take advantage of mini­buses to make the change they will need for the day. If the driver stops short of your stop and says “se puede aprovechar” you are being invited to get out early, usually because it will be difficult (they are in an outside lane) or take a while (long lines caused by traffic lights) to get to your exact stop.

MICRO is the inaccurate name given to the big, old, brightly-painted, retired school buses that traverse the city at a more leisurely pace. They are the preferred choice of those want­ing to get the most bang for their bolo (Boliviano) or for the infirm who have difficulty getting in and out of taxis. Advantages: cheaper - just “un pesito” (1 Bs.), and you can ride when it’s standing-room only, though not comfortably if you happen to be tall.

The drivers of all of the above modes of transport appreciate being advised of your intention to get off one block before doing so. Common expres­sions include: “esquina (corner) bajo”, “me quedo esquina”, “en la parada” (bus stop), “en la pasarela” (pedes­trian bridge), & “en el semáforo” (traffic light).

FLOTAS, the denomination given to long-distance buses, which can be found at the main bus terminal. They go to all major Bolivian cities and some will take you to such far-flung destinations as Argentina, Brazil, Chile and Peru. It’s a good idea to buy your ticket at the terminal a day be­fore travelling, or sooner if during the holidays. If going to destinations such as Cuzco shared taxis, minibuses and micros all leave from within a block or two of the cemetery. Disadvantage: Don’t expect to arrive on time as most flotas, more often than not, suffer at least one flat tyre en route. And since most don’t carry spares, it takes a while to fix and remount a replace­ment. If your bus doesn’t have a flat, consider it your lucky day!

· Before setting a price with a taxi driver one should greet the driver with “Buenos días/tardes/noches” as ap­propriate.

· When getting into a trufi it is con­sidered good form to greet the other passengers in a like manner.

· In a Carry or minibus greeting is op­tional. In a micro greetings are rarely heard. A good rule of thumb is the cheaper the fare, the less politeness is expected.

· Door-closing is an acquired skill. The goal is to avoid being reprimanded by the driver for closing one with too much force, or for not using enough force, resulting in having to open and close the door again. Allegedly both of these acts of passenger negligence “drastically” shorten the service-life of the door’s lock and hinges. To prevent amateur riders from committing this felony, fastidious drivers only allow the voceador/a to shut the doors. As each door in each vehicle is differ­ent from the next we’re talking about quite a daunting skill, mastered only by the select few.

· Long and loud cell phone conversa­tions are commonly, though unfortu­nately, tolerated. Some “technology-challenged” passengers increase the volume of their conversations in proportion to the distance between them and the person they are speak­ing to. If someone is shouting you can wager they are probably talking to someone in El Alto – screaming is usu­ally reserved for calls to Santa Cruz.

· If you’re an MP3 user, be aware that people will have to tap you on the shoulder to get your attention for pay­ing your fare or to have you get out so the passengers you’re blocking can do the same.

Despite some of the minor discom­forts, the system is really quite efficient. Most drivers will pick you up curbside wherever you happen to be and won’t complain if you are schlepping half your household with you – shop­ping bags, flower arrangements, birthday cakes and babies are all welcome.

All you need do is flag one down, hop on/in and grab a seat.