A SONG FOR A VOTE 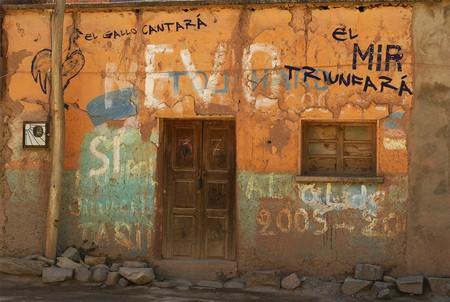 From theme tunes to advertisements, music plays an integral part in the media, but what role does it have in political elections campaigns?

If you want to get a message stuck in people’s heads, a song is a great way to go about it. From major political campaigns to launches of projects like the teleférico, a catchy tune is often part of the publicity package.

‘Do you want a man as president who sees it through and through? Cast a vote for Kennedy for a change that’s overdue. It’s up to you.’

An anthem that plays every time a leader walks on to the stage and up to the lectern to give a moving speech is something people identify with, and can’t stop humming to, until long after the election ballots have been counted and the deal has been done.

But not every election anthem is custom-made for a candidate—some are seized from a nation’s canon of rock, sometimes to the artist’s deep disdain. For example, Tom Petty threatened to sue George W. Bush for using his 1989 single ‘I Won’t Back Down’ during Bush’s successful 2000 election campaign.

Bolivia is no stranger to campaign and publicity songs either. The Zebra road safety song is a more recent addition to the repertoire. Morales’s party, MAS, has also indulged in some party tunes. ‘Somos MAS’ (We Are More) sticks in the mind, featuring the play on words ‘MAS, MAS, MAS’ in the chorus, which means ‘more, more, more’ in English. Even for one-off political events, like the handing over of Quipus laptops to students, MAS decided that music should be an integral part of creating the atmosphere of change.

Surprise, surprise, MAS chose the medium of rap to engage the stadium full of teenagers and made the original choice to open with a parody of the genre’s stereotypical intro:

‘Levantense las manos si les gusta Quipuuuuuus.’
(Put your hands in the air if you like Quipus.)

However, it’s not just modern campaign songs that are remembered today, some Bolivians would still be able to give you a rendition of the songs used in Bolivia’s electoral campaigns during the 90s. Take the former Bolivian dictator and later president Hugo Banzer’s patriotic-sounding ‘Mi General’ from his 1993 campaign, for example:

Although we might mock the often forced lyrics of campaign songs, Jose Miguel Liendo Claure, who was part of the group behind the creation of the ‘Somos MAS’ campaign song, underlines the importance of the words in portraying a strong message:

‘The language, words and the ideological stance that they express is important. For example, in Spain in the 60s, singing the song ‘Al Ven’ (‘Al Viento’), written by Ramón Pelegro Sanchis, was like a rebellion of the youth who no longer wanted to live under Franco’s regime. The lyrics were written in Catalan.’

Here Liendo alludes to the potent symbol the Catalan language had become in Francoist Spain. Wanting to unify the country, Franco had repressed Catalan nationalism, the most obvious manifestation of which was, of course, their own language.

Nearly a decade after Sanchis’s song had been added to the oppressed voice of the Spanish, a musical movement known as Nueva Canción strummed and plucked its way into the pit of Latin America’s social upheavals. Combining traditional Latin American folk music with potent lyrics calling for social change and an end to US intervention, the artists often faced brutal consequences as a result.

‘Voy a preguntar por ti que quedaste solo, por aquel que murió sin saber.’
(I’m going to ask about you who ended up alone, about him that died without knowing why.)

The ‘Vote No’ campaign that supported ending Pinochet’s dictatorship in Chile’s 1988 plebiscite also used a song to encourage reluctant, persecuted citizens to vote against their brutal dictator. And it worked.

‘You can’t have a revolution without songs’ is the motto that flies the flag for Nueva Canción. It was stamped on the banner framing Salvador Allende’s election success in Chile, in 1970, when he became the first democratically elected socialist president of that country. The slogan suggests that music not only has the ability to inspire a successful campaign, but that the pulse of a powerful movement which grows from the people, like a revolution, cannot begin to beat at all without it.

Liendo emphasises this point, sharing why music is so integral to inspiring support: ‘Music, rhythm and harmony awaken varied emotions in us. In the case of political campaigns, music helps to emotionally connect you to a symbol, a flag and an ideological stance.’

So what is it that gives a campaign song that twinkling spark of success? What was so special about Will.i.am’s Obama song ‘Yes We Can’, which went viral in 2008, and the Bolivian political party MIR’s famous electoral hymn from the 90s?

‘The most important thing for a politician is to construct a coherent, credible ideological stance. The job of a campaign song is to tie this stance to the image of the political leader using music’, says Liendo.

A memorable campaign song must unite these factors together, then, in a compelling format. And let’s not forget that Will.i.am’s popularity probably had a hand in the success of his unofficial Obama campaign song. Perhaps it was also precisely because the song was not commissioned by Obama himself that the public adopted it rather than ridiculed it.

Liendo affirms that, usually, ‘A song and its various interpretations are exposed to criticism from one side or another because a political campaign song is also a criticism, a complaint or a proposal.’

However, despite the critique campaign songs are often subject to, they continue to project their political melodies out into the masses. Still considered an integral part of inspiring support, yet not necessarily the first thing that comes to mind when one thinks of an election, campaign songs appear to be the politician’s unsung hero.