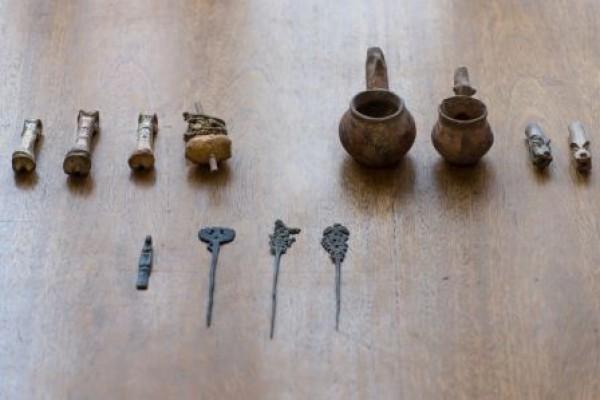 A new investigation into Andean heritage

At the National Museum of Archaeology in La Paz, historian Alvaro R. Fernholz Jemio is opening cardboard boxes labelled with stickers from BoA, the Bolivian airline. He has put on rubber gloves and donned a navy lab coat. ‘There are 13 pieces in this particular box,’ he tells me. ‘Are you ready?’

The items include pots, plates, and fabrics that were confiscated at the Buenos Aires airport in December 2016 on the point of being sold on, presumably around Europe. The recovered loot consists 55 pieces in total. ‘Some of them are Peruvian and Argentinian, but the majority are Bolivian,’ says Sonia Aviles, Director of Patrimony at the Ministry of Culture and Tourism in La Paz. ‘Their origin was determined by specialists at the Archaeological Institute of Buenos Aires.’

‘Recovering these items is important to the people of Bolivia,’ says Jose Luis Paz, the head of the Archaeology Unit at the ministry. He believes their rarity is what makes them important. ’There is little left and we need to protect it,’ he says. ‘Protecting it means protecting our identity and culture.’

The objects command a transfixing power over the viewer. Is this power truly Bolivian?

The recovered artefacts have been lying around untouched in the museum’s storage space for two months. According to Paz, the objects will remain there after they are conserved by the museum's team over another two months. After we look at the sample, Alvaro Fernholz wraps up each piece and gently places it back into its box. His hands move with the utmost dexterity. He is held so firmly in the moment that he seems to have forgotten I am there, watching, unable to touch. The objects command a transfixing power over the viewer. Is this power truly Bolivian? All of a sudden the final box is shut and we are done exploring them. The figurines and plates are out of sight once more, patiently awaiting their uncertain future.

In the next four to five months, the National Museum of Archaeology hopes to open a room  exclusively for these ancient pieces, which cannot be displayed before they are properly cleaned and conserved. This phase will be time consuming, but the items would perish at the hands of time without it. Although the museum only receives around 7000 tourists annually, it is clear that Bolivian authorities will do anything in their power to preserve the country’s heritage, and to ensure that what is rightfully Bolivian remains in Bolivia. Meanwhile, I am left wondering about the real origin of the objects, asking myself whether I will ever know the truth about their story.