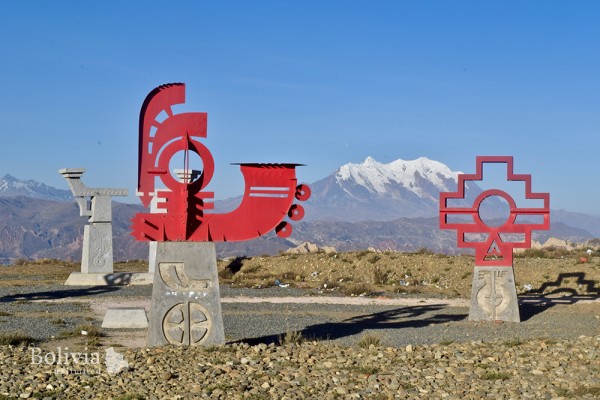 The Arts, Culture and Indigeneity

Thanking Pachamama amongst the sculptures of Francine Secretan

Throughout the month of August, Pachamama, the Andean earth-mother goddess, will receive thousands of offerings as gratitude for keeping fields fertile and life thriving. The traditional way to make an offering is through a mesa, and after purchasing one from the calle de Las Brujas in La Paz, I went to the sculptor Francine Secretan’s spectacular Espacio Ritual in Achocalla, a small town about an hour south of La Paz, to make my own offering. For Secretan, this ritual space is one of her most important creations, because it gives her sculptures a function beyond aesthetics. She described how ‘throughout history, sculptures had always been a part of people's daily lives’ and through her Espacio Ritual in Achocalla and her earlier ritual space in La Cumbre, she has given her art a higher purpose.

Inaugurated in 2015, this area consists of four large sculptures creating a circular space for performing traditional rituals. Secretan described how her objective was ‘to create a sacred space, a transcendental site, a viewpoint on the edge of the abyss, whose unlimited spectacles are accentuated by the sculptures found there.’ Raised up above the town of Achocalla, with the white peaks of Huayna Potosi and Illimani piercing the clear blue sky in the background, this ritual space lives up to Secretan’s objective.

Secretan’s Espacio Ritual is one of her most important creations, because it gives her sculptures a function beyond aesthetics.

The four large sculptures that make up the space are La Puerta (The Door), La Chakana (Andean Cross), El Guardián (The Guardian) and El Recipiente de Energía (The Recipient of Energy). In the centre of the space there is a stone table on which rituals are performed. Secretan explained how each sculpture has a specific purpose and meaning as part of the space. La Puerta, which is a doorway made of stone, ‘opens communication, delimits the space and gives access to another dimension.’ La Chakana, a red cross, is the ‘union of the past and present’ and signifies ‘bridge, transparency and passage.’ El Guardián helps ‘to protect the rituals and the sacred.’ And finally, El Recipiente de Energía, a circle without start or finish, ‘is a symbol of the eternal and the absolute.’ These four combine to create a sacred space perfect for giving thanks to Pachamama.

Pachamama comes from Incan mythology, something that had always interested Secretan. Originally from Switzerland, she has been fascinated by South American and pre-Columbian culture from a very young age. She moved to Bolivia 50 years ago after finishing school and has lived in La Paz and worked as an artist ever since. She described how initially she found the prominent use of rituals and appreciation Bolivians have for nature as a complete culture shock. In Switzerland, rituals no longer exist, she says, and she found it profoundly touching when discovering them here.

‘We think that human beings are the owners and masters of the earth, whereas it is the complete opposite, we are just inhabitants and we have completely blasphemed nature.’

The appreciation of Pachamama is even more relevant today, with increasing global warming and widespread environmental destruction. ‘We think that human beings are the owners and masters of the earth,’ Secretan says, ‘whereas it is the complete opposite, we are just inhabitants and we have completely blasphemed nature.’ The month of Pachamama is an annual ritual that reminds people of the importance of nature and how we must do all we can to look after it. 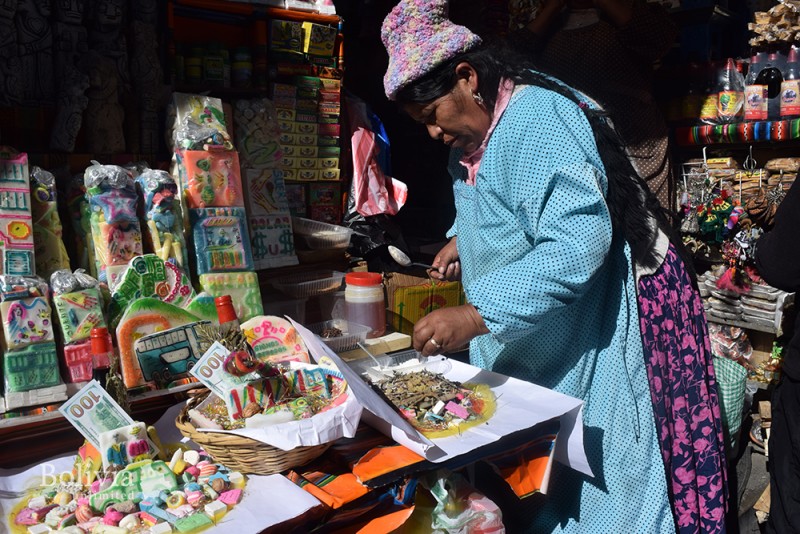 In order to make an offering to Pachamama a mesa is traditionally required, I bought mine from a chiflera on the calle de Las Brujas. These chifleras will prepare the mesa according to a person’s wants and budget. Mine was quite small, costing just 30 bolivianos (plus 10 for alcohol). Some mesas cost as little as 20 bolivianos, but others can cost up to a thousand, depending on what is required. A mesa usually consists of multiple sweets, some with specific images relevant to what the person wants; mine had one for good exam results and a frog which is meant to bring good financial fortune. It’s also very common to include herbs, honey, fruits and coca leaves. A llama foetus, known as a sullu, will often be the main offering of the mesa, and these can vary greatly in size and are priced accordingly. When I bought my mesa, the chiflera topped it with some tinsel and wrapped it in packaging so that it would be ready to be offered to Pachamama.

The offering itself was quite simple. Once I arrived at Secretan’s Espacio Ritual, I unpacked and placed the mesa on a stone table in the centre of the space. After dousing it with alcohol, I set it alight and watched it burn while reflecting on what I had to be grateful for. I thought of my family, friends and the amazing opportunities I’ve had to travel over the past year, but I also thought of Pachamama, the embodiment of the earth mother herself, and for the life she continues to give, even as humanity is determined to destroy it. Being in the space, surrounded by Secretan’s sculptures and the snow-capped mountains was, to repeat the words of Secretan, profoundly touching. Although a little off the beaten track, this is a real must-see in La Paz that definitely deserves to be experienced by more people. 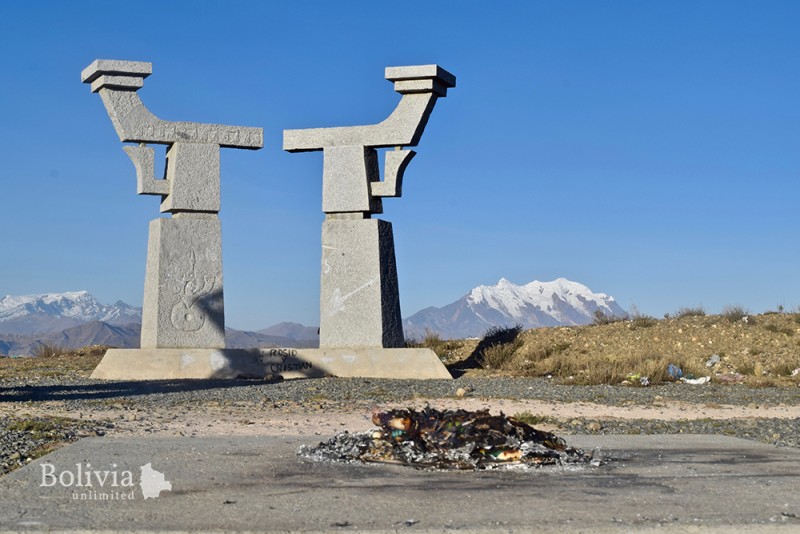 For more information on Francine Secretan, her art and her Espacio Ritual, visit fsecretan.com