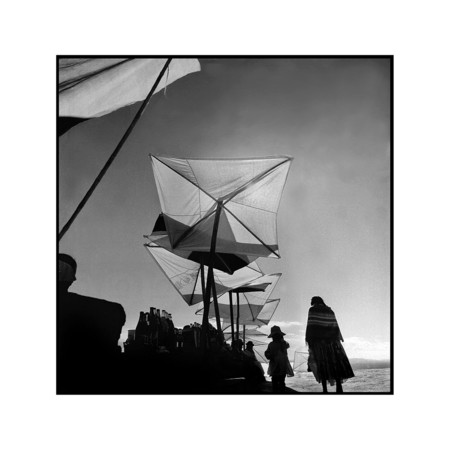 ‘Bolivia has gone through incredible eras: the War of The Pacific, the Chaco War, and many other dramatic periods. Incredible photographs have been taken of all of these times,’ says Bolivian photographer Moreno Fabbri. ‘You go along putting stories together, perhaps with a certain priority in mind--by date, or by the way in which the pictures were made or by their historical value--but all the photos are worth something, nothing can be discarded. A man poses for a photo on the Prado and thinks that he is the only subject of the shot, but in reality his environment is equally important; everything that surrounds him, the buildings, the people, the manner of dress, the stores, etc.’

Photography can be thought of as more than the simple act of capturing images. With time, photographs can become important artefacts for historical documentation and one of the most reliable ways of retelling a story. Photography is a tangible tool for investigation. Humans have always tried to register and leave a record of what they’ve done or felt, and photography has enabled us to progress in our urge of capturing and registering reality.

With the advent of digitalisation, the way in which photos are filed or archived nowadays has taken a completely different path to what we could have conceived of a few years ago. Entirely digital databases centralised in a computer have practically replaced the archiving methods that were practised no long ago, with simple cards and envelopes.

Analog photography emerged in 1840 and was practised widely until 1995, when analog photographers became digital photographers. This was a very interesting time period because it was considerably difficult to make a photograph at the time. For this reason, photos were highly valued for their visual quality, their material features and for the mastery with which they were taken and later conserved. Rescuing these visual artefacts is important not only because of the process that was involved in developing them or because of their antiquity, but also for documentation purposes. Contemporary notions of reality are different to those of the time when photography was invented, but photographs allow us to see things as they once were. Through pictures, we see the changes in how people perceive their surroundings. Photographs are a record of a country’s development, not only in the case of historical moments but also with regards to common people.

José Santiago Moreno Fabbri, a Bolivian photographer, was named Director of Archives at the University of Chile, and remained in this post until his retirement. ‘My uncle taught me how to take photos and use cameras,’ he recalls, ‘but in Chile I also had photography teachers. I wanted to be a painter or printsman, but it never occurred to me that I was going to be a photographer. I always walked around with cameras, recording items. The 60s was a good time, with Allende and the Unidad Popular party. It came down to us to paint about it, but I always had my camera and later on I would develop the photos I made in my paint workshop’.

What is the value of archived photographs?

‘When you get involved in the archive world--and I think this happens to everyone who restores or conserves old photographs--the more torn-up and the older a picture might be, the more it becomes a treasure’, explains Fabbri.

Photographs can tell the story of a common family as well as that of big historical events. Family portraits and the emotional connection they hold are crucial. With time, if these photographs are not well conserved, they may lose value and end up destroyed or in the waste bin. Many countries started to see the value of this and viewed these archives seriously in the 20th century.

‘In Bolivia, the institutions that do not own [photographic archives], even if they have catalogs, might have a wider scope. People’s opinions about a picture are not the only things that matter. It is important to keep a record of who took the photos, along with other bits of information, so that one can write a caption for the shot, whether it’s framed or on a postcard. But it’s not about centralising the documentation. What matters is that these visual documents are preserved and, thanks to digitalisation, it has become much easier to preserve the tangible features of a damaged photograph or a torn-up picture. Before digitalization, if the photo was badly kept, most of the time it was simply lost’.

The description of a photograph is also integral to its preservation. With analog photography, conservation costs can be very high. Photo labs have 50 or 60 processes of conservation that range from daguerreotypes, slides and special wrapping paper, to rooms with controlled temperatures. Every type of photography has its conservation requirements.

UNESCO has tried to make generalised conservation rules for different photo descriptions, but these still haven’t been determined. Nonetheless, there is a standard description that is used in various museums and archives around the world.

The past and the future of the archives

The Municipal Government of La Paz is getting ready to construct and open the first specialised photography museum of Bolivia that will show the history of this art from the 19th century to the present day. It will be called the Museo Archivo Fotográfico Ciudad de La Paz and it will be built on a plot of land at the end of Loayza street on the corner of Indabure. The construction of the museum will start in early 2015.

‘It will have seven floors, three of which will be dedicated to the history of photography in the 19th, 20th and 21st centuries respectively. There will be exhibition rooms accompanied by photography studios or laboratories that will show the technology used by each century’, says Leonor Cuevas, the director of the Unidad de Museos Municipales. The ground floor will have a temporary exhibit room, a photography studio and a room to look at the archive, which will be available to visitors and investigators.

The photographic image plays an important role in the transmission, conservation and visualisation of political, social, scientific and cultural events. It is a basic form of social documentation that facilitates our understanding of the evolution of human beings and everything that surrounds them.