A PASSION SHARED BY YOUNG AND OLD - ANTAÑO 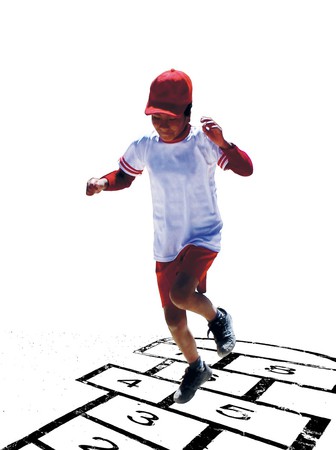 Christina Grünewald roams the streets of La Paz and El Alto in a quest to discover some of the city's most traditional games.

The drive up the hillsides feels like leaving one world for another. Two minibuses and a few pictures later, we arrive at the altiplano. Past paved streets peppered with market vendors we end up at a dusty square. We ask the only person around for the way to the nearest school and then knock on its metal door.

We ask the teachers about traditional games played in Bolivia, and ‘thunkuña’ is the first one that comes to mind—a game known in English as 'Hopscotch', 'Hüpfekästchen' in German and 'Stapu' in Hindi.

In order to play it, you need chalk and a stone for each of the players. Firstly, you must draw an 'avioncito' (meaning ‘little plane’) on the ground which will serve as the arena. To start the game, you throw a stone into square number 1—something not everyone can accomplish in their first try, especially when a group of of 'turistas' is watching.

Once you succeed, you jump on one foot from square to square, using both feet only on the 'wings' of the little plane. After you arrive at the end of the chalk drawing, you turn around and hop the way back towards your stone, which you must pick up while still standing on only one foot. The hats children wear in Bolivia add a level of difficulty to the game, as they must be held in place while jumping from one square to another.

T’ejeta
Like in any growing city, traditional games in La Paz are quietly disappearing from street corners and local parks. Luckily, though, in El Parque Urbano Central we can find 'Pipiripi', a recreational and interactive centre for children, which focuses on getting them away from computers and television through the preservation of the local game culture and traditions.

This intercultural and intergenerational place provides a range of traditional toys for visitors. It also hosts events like such as kite competitions, one of which I attended on the day of my visit. The place was busy and buzzing, with contestants and passersby occasionally getting tangled up in their colorful kites.

One of the sections that attracts a lot of attention is the square people use to play T’ejeta. Two small goals, a homemade ball and an indefinite number of players are needed to play. Mainly boys take part, dressed in their casual day wear or professional-looking football shirts. Sometimes mums are allowed to sub-in as substitute goalies.

Compared to football, everything is smaller. Not even the field is needed; streets work just as well. The ball itself—giving the game its name—is made out of socks, old cloths and grains, making it cheap and easily replaceable using recycled materials. It is not a ball you can buy; the entire spirit is defined by it being homemade. The only apparent downside is that it gets heavy and soggy in the rain, splashing water everywhere as it flies. Additionally, it appears to bounce a lot more than a football and is visibly softer. Technique is everything when it comes to the t’ejeta: both in the making of this traditional ball, and in its use at heart of the most popular sport on this planet.

As I sit by the sandpit, watching colorful kites cut through the sky, I can hear kids playing, parents calling, and a steady rumbling of metallic wheels being pushed along with the help of an especially-shaped wire. The sound is reminiscent of a musical triangle, but this is no musical instrument, it is one of Bolivia’s most traditional games—the ’Rueda’ or ‘Aro’.

The player holds a metallic stick in his hands, which he uses to push the metallic wheel to get it rolling, and later to guide it. It can be played by a single player, or can be used to race others, adding a level of complexity to the game as wheels and sticks crash and tangle to the sound of clashing metal.

It is played by children, though occasionally you’ll find older men playing it as well; their long years of training, have helped them master the game. They can run multiple rounds along the wooden planks that surround the sandpit while their kids, thrilled and inexperienced, only manage to take a few steps. I watch one such man who has mastered the rueda, his name is Froilán Gamarra. He tells BX how, as a boy, he had to walk 2km to school, so used the rueda as a source of distraction in his commute. “Playing this game I would also get to school much faster”, he adds, later explaining that this led to him competing with other boys his age who no doubt did the same. Now Froilán is a happy parent and his son, it turns out, is also an expert at Aro.

Rope skipping—a game that never goes missing in playgrounds and backyards from every corner of the planet. There’s plenty of variety when it comes to playing styles: you can skip on your own, holding both ends of the rope, or in a group in which two participants swing the rope for the rest. In the late 80s and early 90s, a related game became a momentary craze in Bolivia. Like skipping, it involves a rope which brushes under your feet while you jump, but this variant is so different it is best seen as a distant cousin of the traditional game.

We are still at Pipiripi, a place with great energy and happy faces all around. The employees walk around handing toys to those willing to try them. They explain how to use them and even how to make them yourself. One woman shows us Pata Pata.

All you need is a empty plastic bottle and a piece of rope. Tie one end of the rope to your ankle, and the other to a plastic bottle. Hold the plastic bottle in your hand and throw it away from your body towards the ground. Quickly move your foot attached to the rope so that the bottle spins in a circular motion around you, forcing you to hop over the rope. Foot-eye-coordination is key, but practice makes perfect.

Chaman
In La Paz we find a game for young and old, a game of stones which involves 5 piedritas or pebbles.

I am on a guided tour through the markets of La Paz, still on the hunt for traditional games. The tour is very private. There are two of us along with a guide. Upon telling her about our mission she promises to show us her favorite game. After a bit of walking, a cinnamon ice cream and some honey-roasted peanuts, we sit down at the square in front of San Pedro Prison. The name of the game, she tells us, is 'Chamán'.

To play it, you count up to 30 and back to 1. Each number denotes a different way to pick up and throw the 5 stones, meaning that to play it was first needful to memorise all the different permutations. My first impression was that this game required one to be nimble and dexterous. It’s very fast and all you see is a hand moving quickly, catching and letting go of the stones. Plenty of practice is required, and with time comes greater agility, allowing you to play the game faster every time. The game can be played by up to 30 people, either just for fun or in a competition with prizes. It can last for hours, but you can adapt the rules to your preference.

The first player to complete the moves of counting up to 30 and back to one, wins. Speed is therefore the key.

RAYUELA
'Rayuela' usually means hopscotch, but in the valleys of Cochabamba it is the name given to an altogether different game, typically played by adults. It involves a small metallic board which is placed against the wall. Players throw small coins, aiming to get them into the hole (2 points). When the coin lands at the front of the tray a single point is awarded. Before playing you must decide how many points must be earned before a winner is declared. It’s all very relaxed. A pastime more than a game, or simply a way to spend lazy afternoons in the shade.

Deep in the the sub-highland region of the Chaco, is dreamy and sweltering Monteagudo, where a traditional pastime is enjoyed by young and old. Central to this game is a curious artefact made from animal bone (typically from the knee of an ox), along with two iron plates affixed to either side, using screws and arcane ironwork. One would be forgiven for mistaking the 'tepe' as a prehispanic archaeological relic.

In order to play a small mud pen must be found (or created). The tepe is carefully thrown, and a point is awarded if it lands the right way up. A point is deducted when it lands upside down. Two points are given to the improbable feat of landing the tepe on its side—though I'm assured it does happen. To outsiders it might seem a game down to chance, like tossing a coin or rolling dice. As soon as I suggest this to my host he shakes his finger and laughs ‘No no—es de saber’. To play this game well, you have to ‘know’. What, it is not clear.