A Mountain Creamery Comes of Age 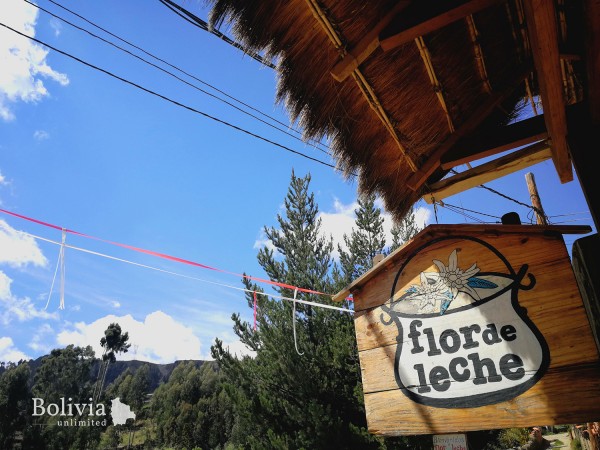 Flor de Leche is known in La Paz for its high quality, locally produced cheeses and yoghurts. Back in 1998, it was the first local quesería to produce fine aged cheese, elevating the standard of cheese-making in Bolivia. Flor de Leche produces 42 products, ranging from cream cheese and butter to yoghurts and specialty cheeses, including Vacherin, Tilsit, Edam and Raclette, all produced and aged on site.

It started 20 years ago, when Stanislas Gilles de Pélichy, a Belgian agronomist, and his wife, Valentina Yanahuaya from the Bautista Saavedra province in the north of La Paz, were looking for their next enterprise after having worked in alternative education projects with several different NGOs. They wanted to start their own social project and, despite not knowing much about milk or cheese, they established Flor de Leche in Achocalla, a municipality 45 minutes south of La Paz.

Flor de Leche began as a small family business; the company had its first breakthrough in 2007, when it began to participate in the Bolivian government’s maternity-subsidy-basket programme. Fifty percent of Flor de Leche’s income comes from this programme, in which all pregnant Bolivian women receive four baskets of nutritional products. Flor de Leche now works with 180 local producers, processing 3,000 litres of milk daily and distributing its products across the country – although 80 percent of its production is sold in La Paz.

Flor de Leche was born out of the vision to produce high-quality products while respecting the environment and helping the local economy grow by giving opportunities to the people living in the area. And this is precisely what happened in Achocalla.

Flor de Leche’s reputation precedes it. The company’s Roca del Illimani is the best Parmesan cheese one can find in Bolivia, and its Achocalla is a Gruyére-like cheese which leaves nothing to envy from the Swiss-made original.

Weekend visitors to Flor de Leche can enjoy pizza, fondue or raclette in the on-site chalet, accompanied by Bolivian beer and wine and finished off with desserts created by Chef Ariel Ortiz.

But more important than just being a cheese company, Flor de Leche is an ecologically and socially conscious business. The staff have coined the term ‘eco-social’ to explain how their work is framed around economical, ecological and social principles. Flor de Leche employs 35 people, most whom are women and between 18 and 35 years old, either from Achocalla or nearby towns. Teresa Gilles, the company’s strategic manager, insists that it’s about ‘revaluing the local workforce’ and giving opportunities to young people with internships and apprenticeships, which allow them to receive training at Flor de Leche while completing their studies.

‘We want to leave the least impact possible on the environment,’ Gilles says, regarding the ecological side of their work model. This starts with the Flor de Leche team, who reduce the use industrial products, and extends to the company’s water-recycling system. The acidic water resulting from the cheese-production process is treated with lye, cleaned and reused to irrigate small farms on company grounds. The whey, a byproduct of cheese-making, is rich in protein, and it benefits 65 families in the area who use it to feed their livestock.

Flor de Leche ‘is part of something bigger,’ Gilles explains. ‘People don’t know this side, what is behind the cheese… [Making cheese] is almost just a way for the [eco-social] project to live.’ That project is Granja Escuela, ‘a space for people to return to a closer contact with agriculture.’ The idea is to train people, mainly locals and youths, in sustainable ways of cultivating the soil using solar heaters, recycled water, bio-digesters and gas produced from compost. Even Flor de Leche’s composting toilets contribute to the company’s total bioavailability: wetlands and worm farms feed off the nitrogen that they produce.

The cheese-production method here has been refined and perfected to a high standard over the last 20 years – but that’s just one part of a larger eco-social goal.

The philosophy of Flor de Leche is reflected on all levels. Decisions are made horizontally via working groups, and 50 percent of the company’s revenue is invested in the community, mostly toward the funding of small social projects. The cheese-production method here has been refined and perfected to a high standard over the last 20 years, contributing to Flor de Leche’s fame and luring cheese lovers to Achocalla. But that’s just one part of a larger goal, and it is something worth paying attention to.