A Longing for the Sea 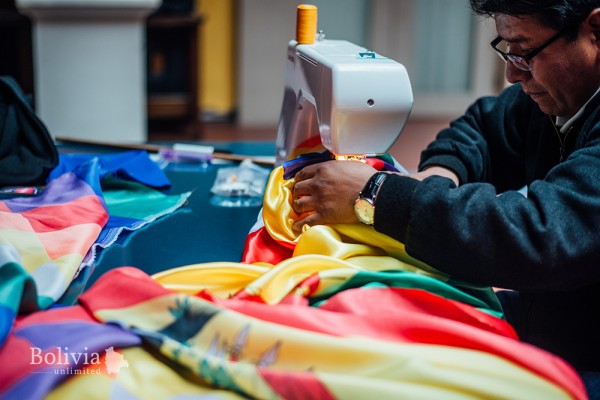 The motivations, and complications, of Bolivia’s UN bid for access to the Pacific

At the time of writing, it is early March. Headlines describing the construction of an originally 70-kilometre – now 200-kilometre – long banderazo pervade the papers; a grand poster of Bolivian President Morales backdropped against the sea overlooks Plaza Avaroa; flags symbolising the loss of el Litoral are draped ominously over several public buildings in preparation for el Día del Mar on the 23rd of the month. To the outsider, the overarching impression is greater than mere nostalgia or commemoration – around the statue of Eduardo Avaroa, the great defender of the Bolivian coast, there is an air of optimism, a gentle breeze of hope, of expectation.

The fervour with which Bolivia simultaneously commemorates and mourns her defeat at the hands of Chilean imperialism has hardly wavered over the past century. The undeclared annexation of over 400 kilometres of Bolivian coastline during the 1879-83 War of the Pacific, and the subsequent enclaustramiento of Bolivia, evidently remains impressed on the national consciousness.

In light of Morales’s decision to take the issue of the sea to the International Court of Justice (ICJ) in The Hague in 2013, there appears to be an unprecedented sense of cohesion and strategy, a newfound competency to go with the intrinsic desire of every Bolivian for access to the Pacific Ocean. Former leaders, such as ex-president Carlos Mesa, have shelved their disputations and disagreements to aid the current government, and the Bolivian people remain united – galvanised – behind their country’s determination to return to the sea.

If you read El Libro del Mar or watch El Mar de Bolivia, both connected to the government’s campaign to return the sea to Bolivia, this is the overall impression you are left with. However, as with all campaigns built on patriotism, it is not until one digs a little deeper that the complexity and diversity of the issue become apparent.

In contrast to the misleading homogeneity of opinion propagated by the current government, public attitudes towards the possibility of returning to the sea are not so much divided as they are diverse. Around Plaza Avaroa, hope is intermixed with pessimism, passion with indifference, and a tangible uncertainty with new a degree of conviction.

‘¿Día del Mar? It’s simply a day,’ argues Julio from La Paz. ‘It’s a part of history and nothing more… We would have to reorganise the whole world otherwise.’

Although not many matched Julio’s candidness, his sentiment was not unorthodox in spite of some concrete support for the government’s current approach.

Pablo Palacios, a paceño who too is sceptical of the contemporary significance of el Día del Mar, is slightly less damning: ‘For me it is more like a dream than a real possibility.’ Yet, in response to the impact of Morales’s recent calls for international support, he agrees that it’s ‘more real than before.’

This micro-sample of opinions from locals around Plaza Avaroa certainly highlights the contemporary cultural and political complications behind Bolivia’s relationship to the sea, again in contravention of the government’s comparatively simplified narrative. With oral hearings set to take place between 19th and 28th of March of this year, Professor Alexis Pérez, an historian who specialises in Bolivian history, stresses the complexity and difficulty of the task ahead for the Bolivian government. ‘It’s not evident that Bolivia is getting any closer to regaining access to the sea since the 1904 treaty [which formalised the de facto armistice between Bolivia and Chile],’ says Pérez. ‘The reality is [the ICJ in The Hague has limits…It cannot touch the sovereignty of Chile. The most it can do is promote the idea of a negotiations table between Chile and Bolivia…This idea goes as far back as the 1840s, when Chile first encroached on Bolivian territory following the discovery of guano deposits.’

The fervour with which Bolivia simultaneously commemorates and mourns her defeat at the hands of Chilean imperialism has hardly wavered over the past century.

However, according to Pérez, it is not only the limited jurisdiction of the ICJ that appears to undermine the government’s calls for international support against Chile. ‘Although there are countries that sympathise with Bolivia, this is mostly moral, brotherly support,’ says Pérez. ‘Another problem is the government’s despotic nature and its failure to seriously tackle narcotrafficking – this damages Bolivia's international reputation.’ In contrast, he adds, ‘Chile pulls more weight internationally.’

It is clear that the overruling of the 2016 referendum on term limits has to a limited extent damaged Bolivia’s reputation as a stable democracy, particularly as the international community observes the Venezuelan president, Nicolás Maduro, controversially tightening his grip on power. Likewise, Argentina, Brazil and Chile, all of which share a border with Bolivia and hold great weight in continental politics, have expressed concern with Bolivia’s failure to suppress the cocaine trade. However, the obstacles between Bolivia and sovereign access to the sea are even more deep-seated than this. As Pérez explains, ‘If our economy was strong the economic pressure would force Chile to sit down…Why is a port necessary? The transaction costs are high and this hurts our export sector. That’s it.’

In terms of international trade, Bolivia ranks 100th in the world with just over US$7 billion in exports per year. Considering that around 70% of these exports go to the Atlantic coast, while Bolivian gas is exported primarily to Brazil and Argentina, the economic arguments behind renewed access to the sea are not independently significant enough to warrant even a minor territorial rearrangement.

However, it is not only the possibility of Bolivia regaining access to the sea that is in question but also the reasoning behind the government’s plea to the ICJ.

‘This government has been weakened [by the 2016 referendum],’ says Pérez. ‘When you go to The Hague you make your plea, you send your representatives, but they are sending half the government…They are using this nostalgia for the sea to manipulate the people.’

Although the current government’s original motives behind the appeal to the ICJ in 2013, two years before the controversial referendum on term limits, were most probably not rooted in a need to appease a discontented electorate, it is evident that the sea has become more important as a unifying force. As evidenced by the mass protests across Bolivia, both for and against Morales, that have commemorated the referendum of February 2016 in each of the last two years, Bolivian domestic politics are, as Pérez argues, ‘very questionable.'

Considering the inextricably complex and difficult reality, and Bolivia’s current democratic uncertainty, the unshakeable confidence and absolute commitment of the government in their bid to regain access to the sea appears even more politically expedient.

‘The government is using this nostalgia for the sea to manipulate the people.’

‘Our presence in The Hague is going to cost between US$6-7 million. It’s expensive when the country has so many problems,’ asserts Pérez. ‘A lot of people call me a pessimist, but I think I'm a realist.’

Although it is evident that the loss of the sea carries great historical and cultural importance in Bolivia, one can be forgiven for being sceptical of the current government’s capacity to find a political and economic agreement with Chile, with or without the multilateral pressure of the ICJ. Not only are there doubts to be had about the implementation mechanisms of any favourable verdict, but there are also doubts as to the competency – and motivations – of the current government. Thus Bolivia’s return to the sea is neither straightforward nor simple despite the apparent reinvigoration of optimism among some Bolivians. The sea evidently remains embedded in the collective consciousness of Bolivia; however, whether this strength of sentiment will translate into a viable political solution between Chile and Bolivia remains as opaque as it has for more than a century.