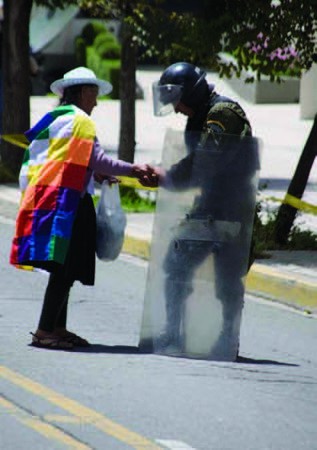 The government claims traditional medicine is predominant in Bolivia while a research institute denounces the eradication of these practices. Robert Noyes sets out to weigh up the evidence.

The field of medicinal practices in Bolivia seems to have turned into a contested political battleground. On the one hand, people like Sr. Alberto Camaqui Mendoza, who is the Vice Minister of Traditional Medicine, advocate that ‘traditional medicine is the first step in the healing process for all Bolivians’. On the other, experts at the Research Institute for Traditional Medicine, INBOMETRAKA, dismiss this claim as ‘a myth of propaganda’. Which side of this debate is more accurate? Is traditional medicine undergoing a resurgence? Or is it only used by the hopeless, those with chronic illnesses desperate for a cure?

Hidden away in the confines of the National Lottery building, Vice Minister Mendoza sat in his office chair with a sharp cowboy hat perfectly balanced on his head. He was a hard man to find. After being directed to and fro by various government offices, I eventually tracked him down in a small office just off the Prado.

Sr. Mendoza explained at length the popularity of traditional medicine in Bolivia, as well as the reasons for this popularity. ‘It’s in the family’s’. Aymara people view illness more as a disturbance in their relationship with the Earth, than as a disturbance in the functioning of their body. ‘Bolivian culture’, he insisted, ‘is different to mine. Here, people don’t trust modern medicine as much as they trust their traditional practices’.

Eager to test out this claim, I headed over to El Alto to talk with the people of INBOMETRAKA, an organization solely dedicated to the study of traditional healing practices practised by Kallawayas—an itinerant group of healers prominent in the Andes. In Incan times, the name for the region on which La Paz currently sits was called kollasuyo—land of the healers. IMBOMETRAKA was founded in 1987 with the aim of gathering the knowledge of Kallawayas, and of producing scientific literature about traditional medicine. The institute has been growing in recent years; in 2003, in part due to the work of the institute, UNESCO officially recognised traditional medicinal practice as a viable healing method.

Up three staircases on a side street near the market in El Alto lay the unassuming offices of the institute. Dr. Carmen Beatriz Loza, the director of research at the institution, offered her apologies—chief director Dr. Quispe would not be able to join us as he had been called to treat two Japanese patients at six that very morning.

So, what did Dr. Loza have to say about this apparent resurgence of traditional medicine? ‘It’s a myth’, she said. ‘It’s not at all true, it’s rhetoric’.

In our conversation, Dr. Loza fiercely contested the story conveyed by the Vice Ministry. She maintained that modern medicine was more popular than traditional medicine, that Kallawayas were being persecuted in Bolivia, and that there were ‘fewer and fewer Kallawayas every day’, adding that this largely has to do with the government thinking that ‘they are crazy’.

Dr. Loza disagrees and quickly puts forward her interpretation of the state of medicine in Bolivia:

'It’s a labyrinth. No one knows quite what to do or where to go. If traditional medicine is the most popular method of treatment among Bolivians then why are the consultation rooms of Kallawayas made of nylon plastic? Of course modern medicine is more popular. How could this not be the case when it is so widely available and promoted by the government? Kallawayas are persecuted as ‘witches’ just like they used to be. Regardless of whether traditional medicine has been officially recognised (as it was in 1984 by the Bolivian Government of the time), the future of traditional medicine is very dark and uncertain.'

‘Dark and uncertain’ or ‘bright and a great success’? Again, I was left confounded by her response – how could it be that these overwhelming statistics were an incorrect portrayal of the state of medicine in Bolivia? Why would the government and Vice Ministry care about arguing that traditional medicine is ‘the first step in recovery for Bolivians’?

According to Dr. Loza, the only reason for the supposed acceptance of traditional medicine is an ideological convenience within a political context. Evo Morales, the current President of Bolivia, represents the Aymara people and advocates for a plurinational state. His government stands for diversity, accepting that Bolivia has many cultures and that each of them is as important as the other. In this rainbow nation it is essential to encompass the medicinal practices of all cultures, particularly indigenous ones, to uphold their equality. That is to say that there must be a non-hierarchical medical system which presents both traditional and western medicine as viable options of recovery. And yet, this is ‘mere rhetoric’, according to Dr. Loza.

Aside from the debate, there appears to be a growing syncretism of modern and traditional healing practices in Bolivia. In December 2011, for example, a ‘hepatobiliary syrup’ made using Andean Plant extract was the first drug using traditional herbs to be legalised by the Ministry of Health. This would seem to suggest that Ministerial actions go beyond rhetoric, and that it’s able to mediate points of convergence between two worlds sometimes seen as at odds with one another.

As an outsider, it is difficult to say which of these arguments portrays ‘the reality’ of the state of medicine in Bolivia. Lucky for us, in July of this year the government will publish the results of a national census that should help clarify some doubts surrounding the debates. One of the questions in the census asks respondents which is the first step they take when seeking medical attention: ‘a private clinic, the public healthcare system, or a traditional doctor?’ The question will remain a moot point until these results are published.

Examining pharmacy shelves and talking to locals, there are some indications that the convergence of both worlds, modern and traditional, may be happening away from government offices in the private sphere. Pectoral Vita, for example, a popular cough syrup manufactured by a large pharmaceutical company, lists huira huira and rosemary among its ingredients, the first of which is a traditional remedy for colds offered by chifleras and Kallawayas alike. In a similar vein, Mauricio Foronda at Fundación Maya (currently organising a small business innovation and acceleration programme), tells me how many of the projects submitted to this organisation for evaluation are precisely those aiming to commercialise a traditional medicine product for mass consumption. Perhaps the outcome of this debate will be decided in the private sector, not by one side winning over the other, but by their marriage.