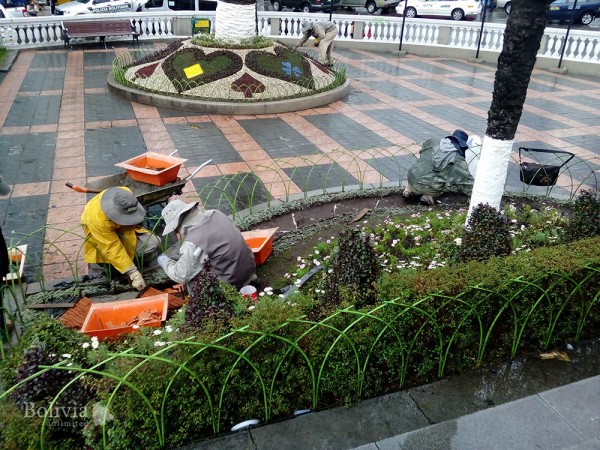 Emaverde’s mission to protect and create parks in the city

La Paz, which spreads across 472 km², is fairly big by Bolivian standards. While its little sister, El Alto, gives the impression of being even larger, the valley in which La Paz is situated affords striking panoramas of the city that reveal its true size. However, one of the things you notice when gazing at both cities is the lack of parks and green spaces. There are many reasons for this, political, social and cultural. But this is starting to change. Green spaces are being preserved and created throughout the city, despite the many challenges.

The slopes of La Paz can be deceptive. Many of these green spaces are tucked away from prying eyes. But the city still lags far behind World Health Organisation guidelines, which state that urban environments should have at least 9m² of green space per person. La Paz currently has 2.5m²; El Alto is worse. This has cultural roots, according to Yorema Gutierrez, a biologist and local advocate for public spaces. ‘People don’t grow up seeing green spaces, so when building and creating new neighborhoods, the space for greenery isn’t allocated,’ she says.

Gutierrez suggests some tentative solutions for this, pointing out how much more effective grassroots action can be, compared to that of the municipalities. ‘Neighbours can create their own communal projects and spaces. It’s about education,’ she explains. ‘There are plants and trees that don’t need much maintenance, you need to teach people how to create spaces cheaply.’

Emaverde, a local company that stems from the municipal government of La Paz, has a different stance. Under its managing director, Julio H. Linares, the organisation has been working hard for the past 14 years to revive the dearth of La Paz’s greenery. Despite the damning statistics, Linares is optimistic. ‘We have been given a mission by the government of La Paz: to maintain the 500 green areas in the municipality, to create green spaces and to manage the recreative spaces of the city,’ he says. This is an enormous task, with those 500 green areas amounting to about one million square metres of land. In 2005, Emaverde only administered 200,000m².

The fight to make La Paz greener has not been an easy one. Linares cites the numerous struggles they have faced, from the topography of the city to fighting with landlords. ‘It becomes difficult to find terrain to build more parks,’ he explains. ‘We work with what we have. Improve them, re-purpose them, modernise them.’

The recent water crisis in La Paz has been yet another challenge. Shrinking glaciers have dramatically reduced the city’s, and Emaverde’s, water supply. Luis Revilla, the mayor of La Paz, instructed the company to refrain from watering plants with drinkable water. This prompted Emaverde to radically rethink how to manage its parks and adapt their methods. ‘We had to use fewer plants and use more inert materials, like rocks and wood,’ Linares says. ‘It was difficult. Using rocks was new for us and more complicated than what we were doing before.’ Emaverde also began using wastewater and planting species with less water absorption.

The main challenge for Emaverde, however, remains financial. Only 35% of the company’s income comes from private sources, including Doppelmayr, the Austrian-Swiss company behind Mi Teléferico. The rest of its resources comes from the municipal government. Unfortunately, with the decline in the price of oil, local government funding has dropped between 30-40%, impacting Emaverde’s finances. ‘We haven't been able to increase the number of green areas this year,’ Linares says. ‘We are mainly maintaining what we have.’

‘It becomes difficult to find terrain to build more parks. We work with what we have. Improve them, re-purpose them, modernise them.’

This does not necessarily spell the end for the expansion of green spaces. Apart from maintaining parks, Emaverde also works in reforestation. ‘Every year we plant between 5,000 and 10,000 plants,’ Linares points out. ‘Only 70% turn into trees, but we take care of them. They are the lungs of the city,’ he says.

For this endeavour, Emaverde partnered with Banco Bisa and the social responsibility departments of several other companies. While the central government has also tried its hand at reforestation, it has only achieved limited success. Linares recounts the government initiative, Mi Árbol, which planted hundreds of trees in rural areas. According to Linares, in communities around Oruro almost no plants survived a few months after planting, due to a lack of supervision. Emaverde’s method prevents this problem, ‘We plan, we oversee closely the plants for at least 4 months, to make sure the trees don’t die,’ Linares explains.

By regional standards, La Paz has a lot of work to do. Asunción in Paraguay has 10m² of green space per person. Cities in Brazil have 20m² on average. These neighbouring countries do benefit from more favourable weather conditions, but La Paz has made admirable progress, both statistically and in the hearts and minds of its citizens. ‘Our work has captivated the people,’ Linares says proudly. ‘Emaverde has been transforming abandoned areas into gardens.’ Trees are becoming a more frequent sight in the city, and paceños are starting to see the value and benefits of having them around.