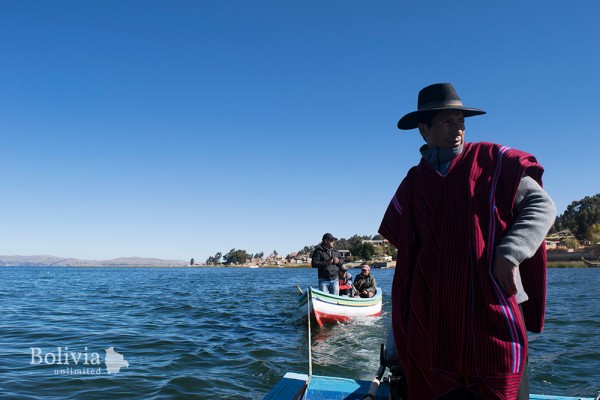 The boat rocked gently and the crisp morning air facilitated a sense of clarity in the experience: tangling fish out of the net, slipping them into a bucket and enjoying the view of the mountains. The Chilaya community in Huatajata, located on Lake Titicaca, is striving to share its livelihood with tourists from Bolivia and abroad by offering an interactive experience called ‘Fisherman for a Day.’

We left around 6am from La Paz, accompanied by Jorge Roberto Salinas from Waliki Adventures, in order to arrive at Huatajata at 9am. During the scenic teleférico ride up to El Alto, embellished by the sunrise over the Andes, Salinas talked about how he discovered the tour. ‘I was introduced to the project by a friend who shared the idea with me, knowing I had the professional resources to support it,’ he said.

Upon arrival in Huatajata, we were welcomed into the community, which included members of the village as well as tourism students from the Technological Institute of El Alto, who were in Huatajata to complete the work-study component of their education. We jumped straight into our first activity, fishing, accompanied by Edwin Catari, a local beekeeper and fisherman, and tourism student Nelson Casas.

Casas explained that amongst the five species of fish that live in Lake Titicaca, three are native, while two were introduced in from abroad. The three native species include carachi, ispi and mauri. Trout and pejerrey, on the other hand, were introduced to the lake via the United States and Argentina, respectively. And although these fish now comprise a major role in both Peruvian and Bolivian cuisine, they’ve taken over Lake Titicaca, resulting in a precipitous decrease in the population – and sometimes extinction – of the lake’s native stock.

As we hauled our net in and began untangling fish, Casas explained the importance of sustainability for the lake and the surrounding region and how his work here balances his love for tourism along with the promotion of sustainable lifestyles.

‘We want to share our way of life, and we find value from the experience of others.’ 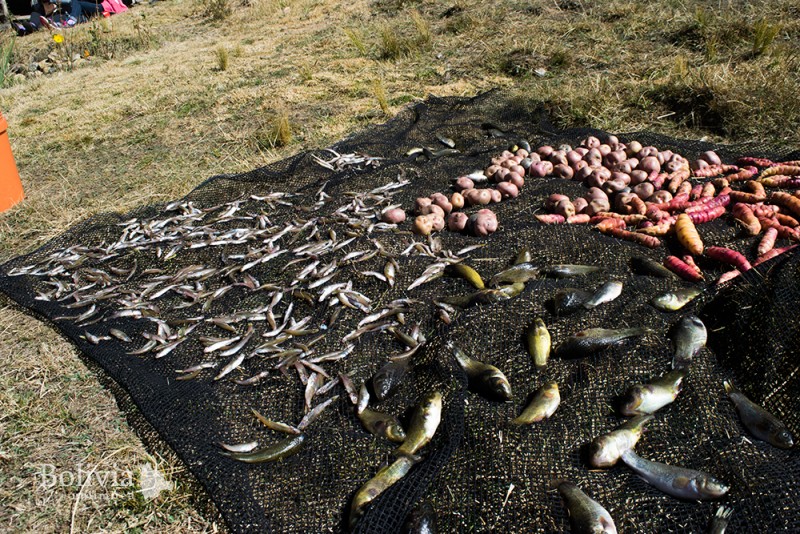 ‘We live in a society that is destroying its own habitat, and I want to conserve the world around me,’ Casas said as he threw a fish from the net to a nearby bird. And even the seemingly pristine Lake Titicaca isn’t immune from this destruction. Lead and mercury levels in the lake have been rising in the past four years, while trash from nearby cities accumulates on its shores. To combat this pollution, the Bolivian and Peruvian governments signed a pact in 2016 and pledged more than $500 million to clean up the area through 2025.

A fisherman from Huatajata can collect 10 to 15 pounds of fish per day, depending on the weather and the season. We caught slightly less than that – due to to the full moon the night before, according to Catari. When we returned to shore, we were met by others who were preparing to cook, some making juice while others were preparing fish caught the day before with diced vegetables. Others stood around a small fire surrounded by rocks heating up from the flames, preparing to make trucha a la piedra (or p’ap’i, in Aymara).

When the rocks were sufficiently hot, we rearranged them flat on the ground so that the dried fish, vegetables and potatoes could be set atop, layer by layer, to cook. Once we added three layers, eucalyptus leaf was added on top and along with a blanket to trap in the aromas.

‘Our grandmothers and grandfathers were extremely hard workers, cultivating vegetables, building houses, fishing,’ Wilma Condori Choquehuanca, a tourism director who works with the village, explained. ‘It is through them that we have the knowledge we use daily.’

We later disassembled the coals and feasted on the fish. Chef José Carlos Ramos Mamani explained that he has been cooking professionally for more than 12 years, but found this job especially interesting because it gave him the opportunity to cook with fish from the lake, a skill that he has been hoping to develop and share with others.

The rich lunch was followed by an excursion to extract honey from the village apiary, bee suits thankfully provided. The village people hopes to sell the honey once they can create consistently greater quantities, along with various artisanal products from neighbouring communities.

‘The three parts of community tourism are the native population, the private businesses we partner with and the public,’ said Remberto Loza, a Huatajata resident. ‘We want to share our way of life, and we find value from the experience of others.’

‘We live in a society that is destroying its own habitat, and I want to conserve the world around me.’

The idea of ‘Fisherman for a Day’ was birthed last year when the community hosted a fishing festival, and both Bolivians and foreigners attended. It became evident that the community’s daily life could be shared with others to spur economic activity in Huatajata. Now villagers offer a hands-on and personal experience that allows tourists to learn about Andean life on the lake, help cook lunch and interact with community members.

Visiting the Chilaya community provides an experience which truly taps into the essence of why we travel: to meet new people, to experience different ways of life and to learn new things. It’s an experience that will leave guests with their bellies full and a newfound enthusiasm to learn more.