A Drought in the Land of the Eagle People 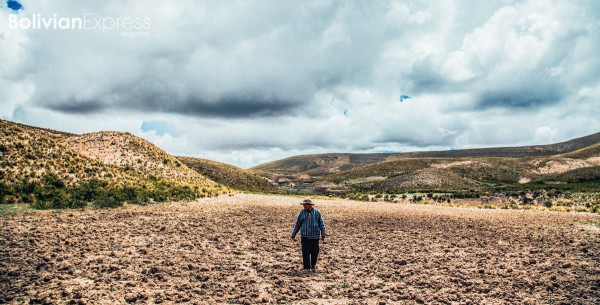 Usually the rainy season on the Bolivian altiplano – the arid high plateau that stretches from northern Chile and Argentina, through western Bolivia and to southern Peru – comes at the end of December and lasts through March and April, but this year was different. The province of Pacajes, in the south of the department of La Paz near the Desaguadero River, is suffering from an unusual drought, probably as a result of el Niño. In the past, el Niño brought more rain to some Bolivian lowlands and drought to the area of Pacajes, but now experts think climate change is making el Niño conditions even worse.

I went to this region at the invitation of Clemente Salzurri, a local elder from the area. I was part of a team from Fundación Ingenieros en Acción, an engineering organisation in La Paz that brings water and sanitation projects to rural communities in Bolivia through international partnerships. We planned to visit communities in the municipality of Calacoto, in Pacajes, for a possible future water project.

Our journey started on a recent frigid morning, departing La Paz at dawn to meet Salzurri and community authorities in El Alto to drink some api and eat buñuelos for breakfast. Afterward, we headed towards Viacha, passing Comanche and Coro Coro, finally driving our vehicle on dirt roads and crossing a large bridge over the Desaguadero River. The snow-covered peak of Sajama, Bolivia’s tallest mountain, was always in the background, tucked behind the hills with the llamas, sheep and tholas that dominate the landscape.

Salzurri described the region, Pacajes, as the Land of the Eagle People (in Aymara, paka means ‘eagle’, and jaqi means ‘people’), who lived in the territory long before the time of the Inca empire. The Pacajes belonged to the Aymara kingdoms that were later conquered by the Incas. Some relics of this culture can still be seen in the different chullpas, or adobe monument graveyards, along the way.

Water is what brings life to this area. Communities survive mostly on herds of llama, sheep and a few crops like potatoes and barley. They count on the rainy season for water, and things go awry when the rains do not come. The communities build cotañas, or artificial ponds, to collect water during the rainy season and hope to get enough to get through the dry season. This time, we saw the cotañas almost dry and with many animals around looking to quench their thirst. Many will probably not survive the dry altiplano winter.

One of the communities that we visited that caught our attention was Jancko Marca. As we approached the village, Gladys, a local leader, showed us a dry area where there once was a small lake. We saw a local home water well, about 14 metres depth. There was still water at 12 metres, but the owner told us that in the past his family could get water at four metres. The situation worsened at the water wells near the primary school – here, none had water. Community members told us that teachers have to bring water from La Paz to get by.

The community’s water shortages and their emergency situations are self-evident, and our team plans to visit again and start looking for a possible international engineering partner in order to assist Jancko Marca.

On our way back, we took another road to try to get home early and catch one of the main roads to La Paz. Salzurri guided us, and we were confident that the terrain was dry. But, ironically in this land where water was usually hard to find, some rain had fallen in the past weeks and suddenly our vehicle was trapped in a wet clay and sandy terrain. One of the back tires was completely underwater. We had to find a way out and looked for stones and dry thola branches, using the jack to lift the vehicle. Our diverse group, Aymara men and woman, a gringo, some Bolivian engineers, all strained to get the vehicle unstuck. And after an hour of trying, the car was finally free. Together we solved this one small problem, and together we all hoped that, when we return, we’ll be able to solve the another, seemingly intractable one.

After thinking about the whole ordeal, it looks like the diverse teamwork that I saw trying to get out of this situation is a good sign for the challenge to bring water to this troubled village. It will take the participation of everyone involved.