A Door to the Paceño Underworld 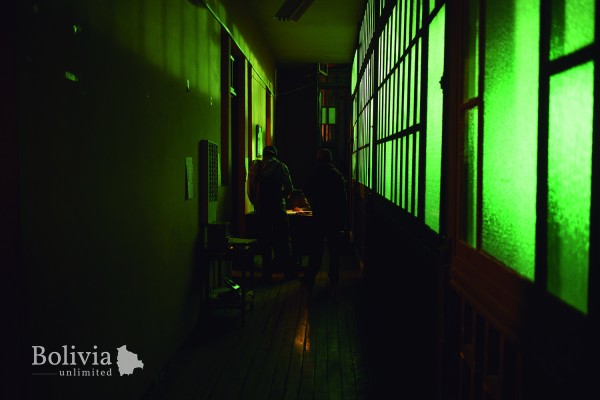 Marcos Loayza and the new voice of Bolivian cinema

The Bolivian film critic Pedro Susz wrote some years ago that filming in Bolivia is as difficult as building a Concorde airplane in a car garage. Despite the lack of demand for Bolivian cinema and the challenges met by the country’s film industry, in the last year there has been a rebirth in Bolivian movies. From Las Malcogidas, an acid musical comedy that tells the story of a woman of 30-something searching for her first orgasm, to Averno, released at the start of this year to tell the escapades of a shoeshine boy weaving through hysterical encounters within the underworld of La Paz. These are two movies that, despite high risks, have managed to captivate the Bolivian public.

But, one should keep in mind that tickets for Bolivian cinema remain significantly lower than their foreign competitors, perhaps revealing the importance of adventurous films such as Averno. Marcos Loayza, director of the film, parodically recreates the spaces and characters of the La Paz underworld to capture the essence of a place that resonates with Bolivians. Audacious in its narration, the story begins with a dream between life and death that merges into a plummeting trip down from the towering city of El Alto to a door in La Paz that leads to that mythological place, Averno.

Much like the spectator, Tupah, an 18-year-old shoeshine boy, does not recognise the moment he has left the real world. Running for his life through the indistinct, obscure city of La Paz, he encounters living ghosts; souls in pain, neither undead nor trying to return to their bodies.

Averno conveys similar stories the Bolivian grandmothers tell their grandchildren about the demons of deceased demonology, the Anchancho, a dreaded malignant spirit or the paths lead by Tata Santiago, a horse-riding truth guide. For the most part, it does not matter what these characters are called or in what scenarios or settings they appear. Loayza has gathered them all to immortalize them in the cinema; where funeral boleros coexist, where a saint who rides on a horse appears through a tunnel to save a life, and where drinkers in a bar walk on a floor flooded with beer in the name of Mother Nature.

Through integrating social realism with the fantastical, Loayza has pioneered a new platform of Bolivian cinema. His aim with Averno, is for people ‘to have more knowledge of the workings of a Bolivian film and the traditions and typical characters that are part the country,’ he says. Lucia Zalles, the marketing coordinator of the film admits ‘it is a risk’ to distribute the movie due to its exceptional and unusual nature. Shown in Cochabamba, Santa Cruz, La Paz and Tarija, the film has had over 17,000 sales by the third week. Although this on its own is a success, the question remains: Is this the right direction for Bolivian cinema?

In the last two decades, Bolivian cinema has been marked by transformations by outside factors. A considerable number of young Bolivian filmmakers received formal training abroad. Loayza however, has chosen to produce a distinctly Bolivian film set within the very city he was born. He devoted a lot of time to the production of the film, dedicated himself to the audio-visual world often left in the background, prioritising aesthetics and technique above narrative. ‘What I attempt to rescue is the dignity of having worked in the streets, having earned every penny honestly,’ he explains. ‘Choosing a shoeshine boy as the protagonist creates a very urban image ingrained in La Paz – they often hide their face and have a very definite, stand-out identity.’

‘The film looks to the darkest side of us as human beings [...] The cinema is a mirror for everyone in some way or another. I wanted to show another type of mirror, a distorted mirror,’ he says, pointing out that the film does not seek to judge but rather talks about reconciliation and forgiving oneself.

Averno has received predominantly positive reviews, with the majority of critics giving it five stars and agreeing that the photography, decors, costumes, makeup, visuals and screenography are extremely effective in creating Loayza’s vision of the creepy underworld. However, some viewers lamented the lack of script. Facebook user Pablo Rossel says ‘there is no continuity’ and calls it a story ‘without feet,’ while Kevin, also on Facebook, suggests it’s just ‘a film made of poorly made metaphors.’ Despite these few discerning comments, the reviews have mainly been positive with one English-speaking spectator even saying: ‘

is a movie that can take you to the underworld through a vivid journey to understand beliefs and locations intrinsically related to what life and death might be.’ This suggests that Averno has been vastly celebrated because it’s one of the few films to be typically ‘Bolivian’, revealing an unmet demand for quintessentially Bolivian movies for nationals and foreigners alike.

Much like making a film in Bolivia, entering Averno is not easy, but it is not difficult either, because you do not choose to go there. Averno is a limbo, a place where everything is possible and at the same time, nothing is. It takes us to the courtyards of memories and prompts the discovery of a magical story in the cinematographic voice of Loayza, which will perhaps be eternalised as a vital part of Bolivian cinema.