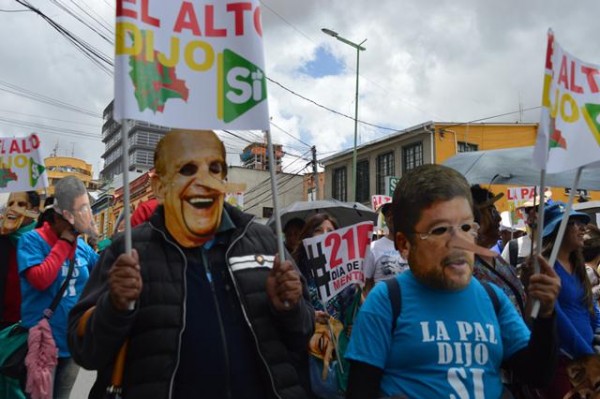 Alternative facts in the aftermath of the referendum

It is clear from my initial drive down from El Alto airport that this is a turbulent time for politics in Bolivia. Even at a bleary 6 am, the bellicose graffiti lining my descent unequivocally suggest a public at loggerheads. ‘No Es No’ in fresh red paint is slashed by the countering message, ‘El Alto Dijo Sí’. This is not simply a hangover from last year’s referendum, this is a nation engaged in a lasting debate leading up to a landmark anniversary.

More than one year on from the 21 February referendum of 2016, where a slim majority (51.3% to 48.7%) of voters decided against allowing President Morales to run for a fourth term, the scars of the polarising campaigns are etched into the fabric of the city.

My own recent political past has been dominated by two referenda: Scottish independence and UK membership to the European Union, binary votes that split the UK into opposing halves. By opening the vote up to the public, the government had hoped to draw a line under these respective debates. However, both were campaigns run on divisive rhetoric, fuelled by public hoodwinking and baseless speculation. Consequently, and perhaps unsurprisingly, the results have been marred by renewed calls for a ‘free Scotland’ and hope that bureaucracy could block Brexit, thus preventing any closure for the victors.

In Bolivia, President Morales has relentlessly sought to distance himself from the ubiquity of both Western politics and Western politicians. In his words, ‘we are anti-liberal, anti-capitalist, anti-imperialist’; or, to put it otherwise, the diametric opposite of our UK counterparts. However, across La Paz, last year’s referendum is casting an all-too-familiar shadow.

Reflecting on his losing 2016 campaign, Morales reverted to one of his now-characteristic footballing analogies to claim the result represented merely the ‘first half’, and that the second was yet to come. Scarred, in his words, by a ‘dirty war’ on social media, the president vowed: ‘This struggle will continue… It will never be abandoned.’

It was after, presumably, 90 seconds of heated discussion, that the staff of the Oxford Dictionary agreed that the ‘Word of 2016’ should be ‘post-truth’. Following in the not-so-watershed footsteps of ‘GIF’, ‘Selfie’, ‘Vape’ and ‘Emoji’, this accolade might best be taken with a pinch of salt. Yet, day by day it seems that ‘post-truth’ will prove to be an era-defining term. Rhetoric and sentiment have ‘trumped’, so to speak, any necessity for plain honesty.

What strikes me about this anniversary of the vote, or 21F in the local shorthand, is that it smacks somewhat of Republican Counselor Kellyanne Conway’s now-notorious pivot phrase, ‘alternative facts’. As if to reinforce this, in an example of somewhat ironic polarisation, 21F is alternatively labelled the ‘Día de la Mentira’ or the ‘Día de la Democracia’ by those on either side of the political fence. The past year, it seems, has served to divide the Bolivian public into two separate camps: those who believe Morales to be the victim of a dirty campaign, and those who believe he is the architect of a conspiracy to devalue the referendum result.

Much of the controversy and contention is centred around one woman: Gabriela Zapata. Martyr, scapegoat, hostage, the peroxide-blonde pin-up girl for contradiction has played many parts in the past year, most with less credibility than her adopted hair colour.

First, she alleged that Evo had fathered her son. He confirmed, claiming that this son had died in infancy. Shortly afterwards, Zapata told the press that her son was alive, later appearing in public with a young child claimed by the government to be ‘a fake’. After an inquest, Zapata was arrested and charged with influence-peddling, illicit enrichment, and money-laundering, and accused of colluding with the opposition to soil the president’s name. Two days before the one-year anniversary of 21F, a weeping Zapata was interviewed for TV network ATB. In the interview, which was edited by Jaime Iturri, the network’s major shareholder with perceived ties to the government, Zapata debunked all of her previous claims, stating that her son had never existed and absolving the president of any wrongdoing. Samuel Doria Medina, Eduardo León and Walter Chávez were instead blamed for orchestrating the scandal. 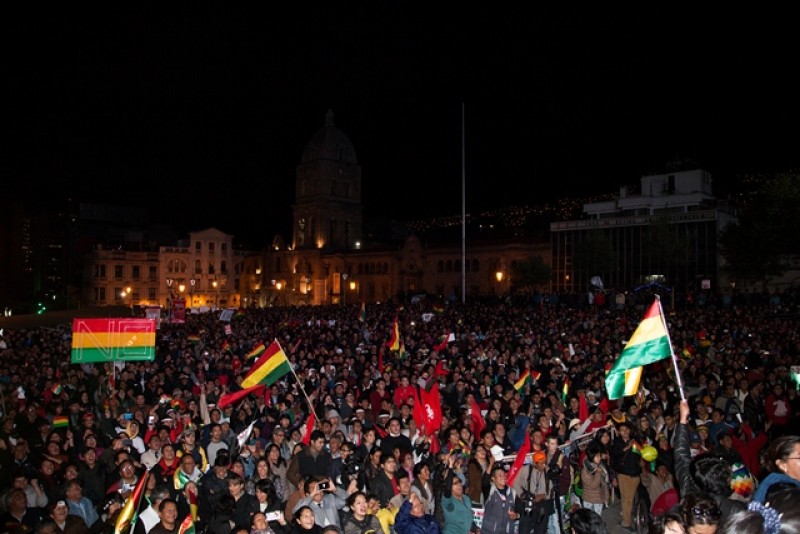 If last year’s referendum, following Morales’ football analogy, was the ‘first half’ of the piece, the two marches on its anniversary felt a lot like its penalty shootout.

At midday, I linked up with staunch Morales supporters in their parade from Plaza San Francisco to Estadio Hernando Siles. The first impression I got from this lunchtime show of solidarity was that many were going through the motions. Initially, those I spoke to seemed to have convened here as a matter of course, as representatives of their respective politicised factions. Indeed, there seemed a more pressing threat provided by the midday sun than the people’s indignance.

Yet, as we approached the stadium, where just moments before the cocaleros had wreaked havoc with official preparations, the emotional temperature among the crowd intensified. There, I spoke to a long-haired man in his 30s sporting sunglasses and a fitted leather jacket: ‘This is the inevitable culmination of a decade of lies,’ he barked over disjointed chanting from sections of the crowd. ‘We are here to say that we support Evo and we do not believe this conspiracy.’ These true Evo supporters had converged in number to defend their man, their president – a victim, in their eyes, of a mud-slinging scandal that warped the results of the referendum.

Hours later, after sunset had been and gone, I joined the ‘Día de la Democracia’ pilgrimage to Plaza San Francisco. A year ago, the cities of La Paz and El Alto voted in favour of enabling President Morales to run again in 2019. That evening, this could not have seemed further from the case. Firecrackers exploded in all directions; effigies were burnt in the streets; a deafening loudspeaker riled up the crowd with battle cries of, ‘No Es No! Bolivia Dijo No!’

Above the stage there was an electronic advertising billboard that seemed entirely out of place. That is, until the new Samsung Galaxy arrived on screen: much like the phone’s predecessor, this march had the feeling that, at any moment, it could spontaneously combust. Judging by the volume of posters, banners, and chants featuring Gabriela Zapata, the ATB interview had merely poured petrol on this fire. This riotous crowd was at least twice as large as its afternoon opposition. The masses, it appeared, had converged to defend their fundamental right to a respected democratic voice.

With anti-MAS chanting ringing in my ears, and the faint echo of firecrackers following me back to Sopocachi, I found it impossible to reconcile these two jarringly opposed marches. More than anything, they served as an unambiguous illustration that, where 21F is concerned, we are not merely dealing with alternative facts but with alternative narratives; two versions of events utterly at odds with each other. Yet, marchers from both sides tell an edition of the ‘truth’ with such untempered conviction that it is impossible to see any common ground between the two.

As things stand, the final official word – ‘official’ in the loosest possible sense – has come from the side of the government, courtesy of Gabriela Zapata’s most recent U-turn. The case, though, as the anniversary marches will testify, is anything but closed. Zapata’s starring role as eponymous anti-hero of ‘The Blonde Who Cried Wolf’, whether willingly or not, has so effectively evaporated any value of the truth that either side is able to choose the version of reality that fits their existing opinions.

When the ‘truth’ is left up to the eye of the beholder, it merely serves to reinforce the already established prejudices of the public. In such an environment, political polarisation can only intensify. And that is exactly what I witnessed on 21 February, 2017.