100 Bolivianos: The Journey of a Note Through La Paz 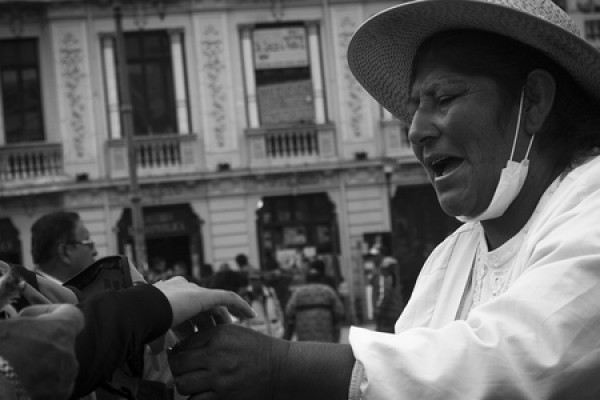 Guards with guns, blood-dripping cow carcasses, and unwashed tourists—all witnessed through the journey of a hundred bolivianos, from the cashpoint as a crisp note to a roadside kiosk as a handful of coins. A presentation of the city's commercial life.

They are both dressed immaculately, their peaked and polished caps casting shade over their wrinkled eyes. These are my protectors as I am shuttled off the armoured truck, bundled with hundreds of others like me in the confines of a black briefcase.The two guards that escort me bear semi-automatic shotguns, deterrents to anyone considering an unwise attempt on the Banco Union. Shortly I will be in a cashpoint and, soon after, injected into the lively and variable economy of the city. I am a 100-boliviano note, red and white, emblazoned on one side with the image of Gabriel René Moreno, a prestigious Bolivian historian, writer, and biographer. I am ready to be cast around and broken down throughout the numerous exchanges and transactions that occur within the city of La Paz.

I am gripped tightly and hastily put into the wallet of a smartly dressed gentlemen. He appreciates the importance of punctuality but still craves his morning salteña in Plaza España, which has forever been a part of his daily routine. He will have to be late because smaller change is necessary to purchase one of these warm delights. In the Ketal supermarket, he buys a bottle of vino tarijeño for his evening agenda. I am broken down into a fifty, a ten, and a handful of silver coins.

Outside, people cluster together under the multicoloured tarpaulin of the salteña stand, protected from the light drizzle. The gentleman leans in favour of carne over pollo and, in the form of a fifty-boliviano note showing the face of painter Melchor Pérez, I am handed over and quickly placed in the pouch of a cholita street vendor. Many salteñas, several empanadas, and the occasional dribble of llajua later, I am given as change to a new host. She buys several tucumanas for her office and, in return, receives me in the form of a twenty-boliviano note, displaying the lawyer Pataleón Dalence and, on the reverse, the Golden Colonial House of Tarija. She heads down Calle Ecuador and is soon in the Sopocachi market that is located below Calle Guachalla.

The entrance is lined by a flamboyant display of flowers that send an attack of colour and fragrance on the senses. Once her eyes have adjusted to the low light, she can see the diverse proceedings of this informal market. Women are perched high upon mountains of cleaning products, whilst cow carcasses hang from silver hooks, the blood still dripping, and giant sacks of pasta are stacked towards the ceiling. As tempting as all this is, my proprietor is here for a papaya juice. I am exchanged between hands and coated in the remnants of fresh fruit. It is not until later that I emerge once again. As a ten-boliviano note, printed with an illustration of the city of Cochabamba on one side, I am flung into a back pocket of a young man, my new possessor, a lost tourist on the wrong side of town.

He steps from this subterranean market outside and, following his map, begins to walk towards Plaza Murillo, the epicentre of the city's political life and the location of his hostel. On every corner, under every roof ledge and in every concealed alley way, informal street commerce and exchanges are evident. Coins and notes are interchanged amongst hands everywhere. On Avenida 6 de Agosto, passers-by are tempted into reading daily newspapers by women crying out ‘La Razon’. Along El Prado, young boys and older men known as lustrabotas, wearing thick balaclavas, sell their shoe-shining services for a pittance. CD kiosks line the sidewalks of Avenido Ayacucho towards Plaza Murillo, each selling a range of music for a small price, from Beatles tribute bands to local reggaeton.

The mid-afternoon sun warms the cobbled stones of Plaza Murillo and the usual kit of pigeons clamber on one another, fighting for the handfuls of food that tourists throw. A local man wanders around taking photos of these events unfolding. I am plucked from the tourist's pocket and given to this spirited entrepreneur. I now reside in his pocket reduced to a five-boliviano coin. For this price, the backpacker receives a picture of the pigeons scrambling amongst his dreadlocks.

Later, once the light has begun to fade and the pigeons have mellowed, the gentlemen decides his day´s work is done and walks in the direction of Avenido Illimani. Here he hails down a old American school bus, known as a micro in Bolivia. For the price of one boliviano, this cramped but ever efficient method of transport can take him to any of the destinations displayed on the placard in the front window, and now he heads for home.